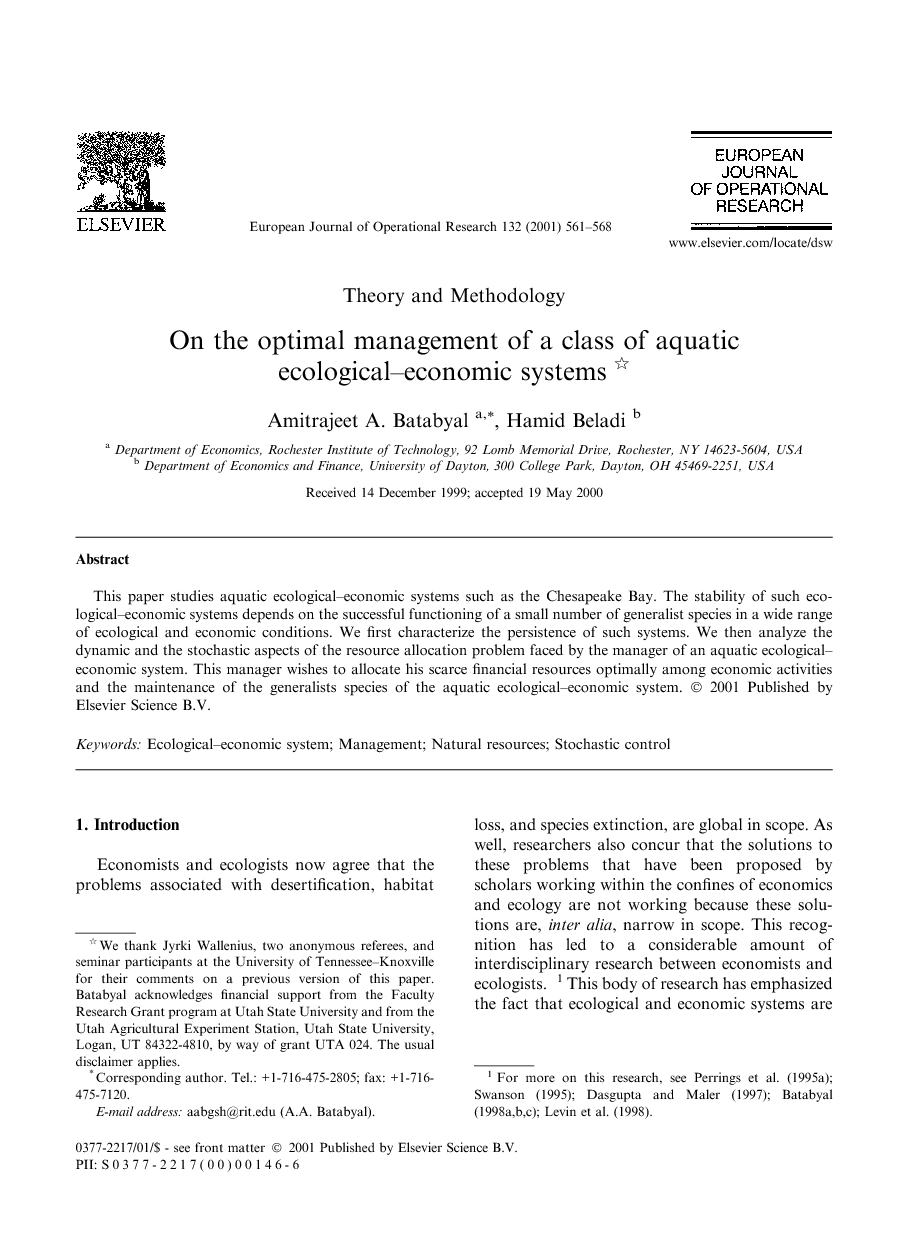 In this paper, we studied the optimal management of jointly determined CEEs. The distinguishing feature of these ecological–economic systems is the fact that their stability (persistence) depends on the successful functioning of a small number of generalist species in a wide range of ecological and economic conditions. We first provided a mathematical characterization of the persistence of CEEs. To the best of our knowledge, this task has not been undertaken previously in the literature. We then studied the dynamic and the stochastic aspects of the resource allocation problem faced by a manager who is interested in the ecological and the economic aspects of the management problem. Our analysis leads to three salient policy conclusions. First, when considering the management of CEEs, it is important to take those steps which ensure that the composition of the small number of generalist species is maintained. In the context of a CEE such as the Chesapeake Bay, this means that it is salient to ensure the well-being of the various species of submerged aquatic vegetation. This is because the communities comprising the submerged aquatic vegetation are essential feeding and refuge areas for a number of species. Moreover, these communities “have been shown to play a significant role in modulating nutrient and sediment cycling in littoral regions of the Bay” (Costanza et al., 1995, p. 107). Second, in determining the optimal division of the exogenously given budget between the generalist species of the CEE, the manager should not consider the magnitude of the available budget. In other words, the decision rule for allocating this budget between the generalist species of the CEE is invariant to fluctuations in the actual level of the budget. Finally, the manager of a CEE should permit economic activities to continue up to a point and no further. At this point, the cost of economic activities equals the right-hand side of Eq. (12). To see the merits of this kind of an approach to the management of CEEs, consider the effects of mismanagement in a particular CEE, namely, the Chesapeake Bay. The economic importance of this Bay stems primarily from the presence of species such as the American oyster, the striped bass, the American shad, and the blue crab (Cumberland, 1990). In recent times, the numbers of these species have declined dramatically. As noted by Costanza et al. (1995, pp. 118–119), this is because of “a combination of overfishing and mismanagement of … submerged aquatic vegetation …” The analysis of this paper can be extended in a number of directions. In what follows, we suggest three possible extensions. First, this paper analyzed the case of uncertainty associated with the effects of managerial actions for a single species only. A more general approach would involve working with two stochastic differential equations, corresponding to the two sources of uncertainty in the management problem. Although, it is unlikely that this more general formulation will lead to closed-form solutions, a numerical analysis of this more general model is likely to yield useful policy insights into the optimal management of jointly determined CEEs. Second, it might be useful to analyze a version of the CEE management problem in which the total number of members in each of the two-generalist species, i.e., n1 and n2, vary over time. Finally, the analysis of this paper can be made richer by studying the effects of specific price and quantity control instruments on the well-being of an ecological–economic system as measured by persistence or, depending on the context, an alternate stability concept such as resistance or variability. Analyses of these aspects of the problem will provide additional insights into the optimal management of jointly determined ecological–economic systems.