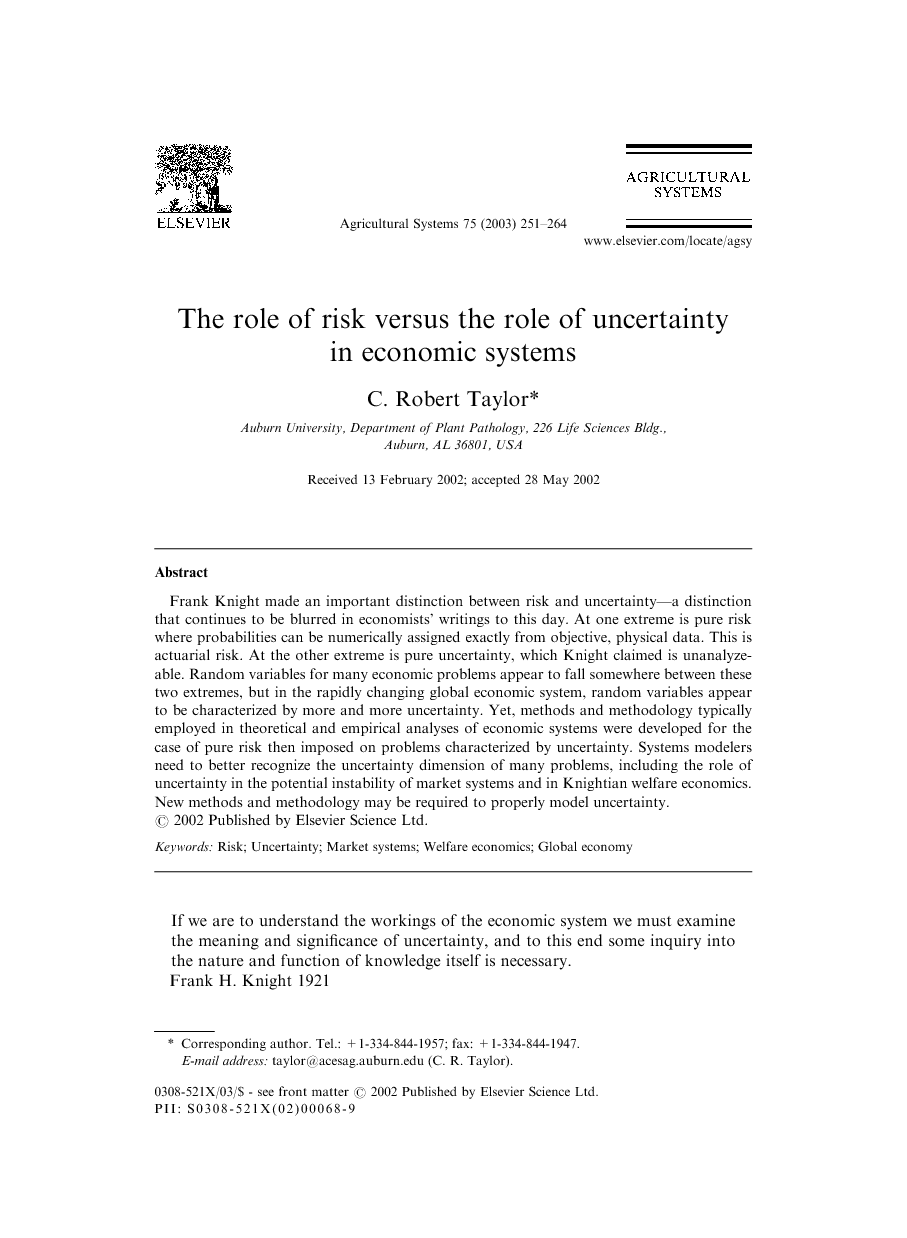 Frank Knight made an important distinction between risk and uncertainty—a distinction that continues to be blurred in economists’ writings to this day. At one extreme is pure risk where probabilities can be numerically assigned exactly from objective, physical data. This is actuarial risk. At the other extreme is pure uncertainty, which Knight claimed is unanalyzeable. Random variables for many economic problems appear to fall somewhere between these two extremes, but in the rapidly changing global economic system, random variables appear to be characterized by more and more uncertainty. Yet, methods and methodology typically employed in theoretical and empirical analyses of economic systems were developed for the case of pure risk then imposed on problems characterized by uncertainty. Systems modelers need to better recognize the uncertainty dimension of many problems, including the role of uncertainty in the potential instability of market systems and in Knightian welfare economics. New methods and methodology may be required to properly model uncertainty.

Frank H. Knight is widely known for his classical 1921 book “Risk, Uncertaintyand Profit,” in which he made an important distinction between risk and uncertainty. This book and subsequent writings are much more significant than this distinction alone, however, because they reflect an evolving social and economic theory embracing not just risk and uncertainty, but imperfect competition and welfare economics. The economic milieu in which Knight's ideas were formed was one in which a few firms dominated some markets, particularly oil and meat packing. Out of this environment came our existing Antitrust Laws and, in the same year that his book was published, the Packers and Stockyards (P&S) Act. These antitrust laws led to divestiture in some highly concentrated markets. As we enter the 21st century, however, we have witnessed an unprecedented wave of mergers, acquisitions and joint ventures leading to horizontal concentration, to vertical integration, and to a web of interlocked firms1 that is considerably more intense than during Knight's era. The permissive attitude behind approval of recent mergers, acquisitions and joint ventures appears to be based on the single-minded pursuit of economic efficiency. Legislation including GATT, NAFTA, and Freedom to Farm also reflect the pursuit of economic efficiency, as does the teaching of many professional economists. While national and global policy has a recurring theme of economic efficiency, and giant corporations continue to justify growth on the unsubstantiated claims of economic efficiency, it seems to this writer that recent corporate developments are more about economic power—raw economic power—than about economic efficiency. Historically—perhaps even through the mid-l990s—firm growth, mergers, acquisitions and joint ventures were about economic efficiency. Food consumers have enjoyed unquestionable gains from this consolidation and the resulting gains in efficiency. In the last few years, however, the efficiency gains are arguably negligible, yet the constant flux of reorganization and consolidation continues. What is now occurring in global agribusiness generally appears to be more of a street fight over economic power, than an effort to capture efficiencies. Global organizations such as the WTO, IMF and World Bank claim purview over global economic rules. However, Thurow (1999) maintains that global organizations like these are nothing more than imposing facades with no structure behind them. The evolving global economy has been likened to “Cowboy capitalism” of the American west in the 19th century (Thurow, 1999). In the global economy, as in the Cowboy economy, there are no rules for making markets work properly, no rules for preventing a market system from naturally evolving to monopoly, no antitrust laws, no antitrust police, and no antitrust enforcement agencies. Raw economic power may be the 21st century equivalent of the fastest gun in the 19th century. The outcome of this global street fight is highly uncertain. There appear to be tremendous uncertainties about the future of United States agriculture, uncertainty about whether an individual producer can get a contract, especially a preferential contract, uncertainty about farm programs, uncertainty about the structure of agriculture, uncertainty about intimidation and retaliation by integrators, uncertainty about exchange rates, uncertainty about environmental regulations, uncertainty about the future existence of commodity markets, uncertainty about development of global antitrust laws, uncertainty about enforcement of current domestic and foreign antitrust laws, and so forth. For the above reasons, this seems an especially appropriate time to revisit Professor Knight's views on risk, uncertainty, imperfect competition and welfare economics in the context of the on-going street stampede for economic power in the face of tremendous global uncertainties about to the global food economy. We conclude by briefly discussing the implication of Knight's ideas for systems modeling of the food economy. No definitive suggestions regarding incorporation of uncertainty into systems models of the economy is offered. Rather, the purpose of this article is the much more modest intent of stimulating thought on inclusion of uncertainty—as opposed to risk—in systems thinking and in economic systems models.

William Greider (1992), formerly on the editorial team of the Washington Post, has been observing the realities of political and economic power for decades, including the emerging global economy.13 His stark view is: In short, if I am compelled to guess the future, I would estimate that the global system will, indeed, probably experience a series of terrible events—wrenching calamities that are economic or social or environmental in nature—before common sense can prevail. It would be pleasing to believe otherwise, but the global system so dominates and intimidates present thinking that I expect societies will be taught still more painful lessons before they find the will to act. The utopian vision of the marketplace offers, after all, an enthralling religion, a self-satisfied belief system that attracts fervent and influential adherents. The wondrous machine of free-running enterprise has fantastic capabilities and people defer to its powers, persuaded it will carry them forward to millennial outcomes. Abstracted from human reality, the market’s intricate mechanisms convey an entrancing sense of perfection, logical and self-correcting. Many intelligent people have come to worship these market principles, like a spiritual code that will resolve all the larger questions for us, social and moral and otherwise, so long as no one interferes with its authority. In this modern secular age, many who think of themselves as rational and urbane have put their faith in this idea of the self-regulating market as piously as others put their trust in God. When this god fails, as I think it must, people around the world may at last be free to see things more clearly again, and to reclaim responsibility for their lives and begin organizing the future in its more promising terms. Greider, p. 473 Although Greider has a somber and potentially cataclysmic view of the emerging economy, he believes that: This outcome is avoidable, I believe, if nations will put aside theory and confront what is actually occurring, if they have the courage to impose remedial changes before it is too late. (p. 316) To the extent that remedial change is needed, it appears to me that economics, broadly constructed to include economic power and freedom along with efficiency, has much to offer in guiding change and preventing cataclysmic events. The concepts of economic efficiency, competitive markets, market equilibrium, risk, and risk aversion have dominated systems modeling of the food economy. In the rapidly evolving food economy, these concepts may become less important while concepts of economic power, economic freedom, imperfectly competitive markets, knowledge acquisition, asymmetric information, disequilibrium, instability, decision making under uncertainty as opposed to risk, and chaos become more important for systems thinking and modeling. Unfortunately, it will be difficult to obtain quantitative measures on many of the concepts appropriate for systems modeling of the emerging global food economy. Furthermore, even for modeling concepts and variables for which we can obtain quantitative data, the system may be changing too rapidly for us to have sufficient degrees of statistical freedom for application of traditional tools (Just, 2001). While we may not be able to precisely quantify many of the concepts and variables appropriate for systems models of the food system in the coming age, the application of roughly parameterized nonequilibriurn and nonlinear simulation may aid our thinking and analysis of alternative futures for the food system. In our thinking and in our economic modeling, the economic concept of society's well-being needs to be expanded once again to include more than the single-minded pursuit of economic efficiency. Uncertainty, as opposed to risk, appears dominant in the rapidly evolving global food system. In this age of the global cowboy economy without structure and with a political climate dominated by corporate agendas, we must raise the question about whether the uncertain system is spiraling out of control (Greider, 1997)? What do we do? How do we design an economy with enough uncertainty to maintain long-run health but which will not spiral out of control? It seems time, if not past time, to design a food system from the “ground up.” Designing from the ground up has a literal connotation along with a figurative connotation: We need to design not just a food economy, but to also design a food production system as a component of the food economy. Do we want to continue with chemically intensive commercial agriculture, shift to organic farming and gardening, shift to suburban gardens for all food, shift to a system based on agroecological principles, or have some combination of all of these systems? I do not have any presumptuous answers to the questions raised here, but it is evident to me that a systems approach provides an appropriate framework for “thinking” about the kind of food system that will be best for our planet in the 21st century and beyond. It is also evident that uncertainty, as distinct from actuarial risk, must not be ignored in such wide-open thinking and must not be slighted in future research, as it has been in the past. This article is a call for wide-open systems thinking about what kind of food economy is best for the continual well-being of the world's citizens. Just another exercise in economic efficiency alone does not appear to have much to offer.