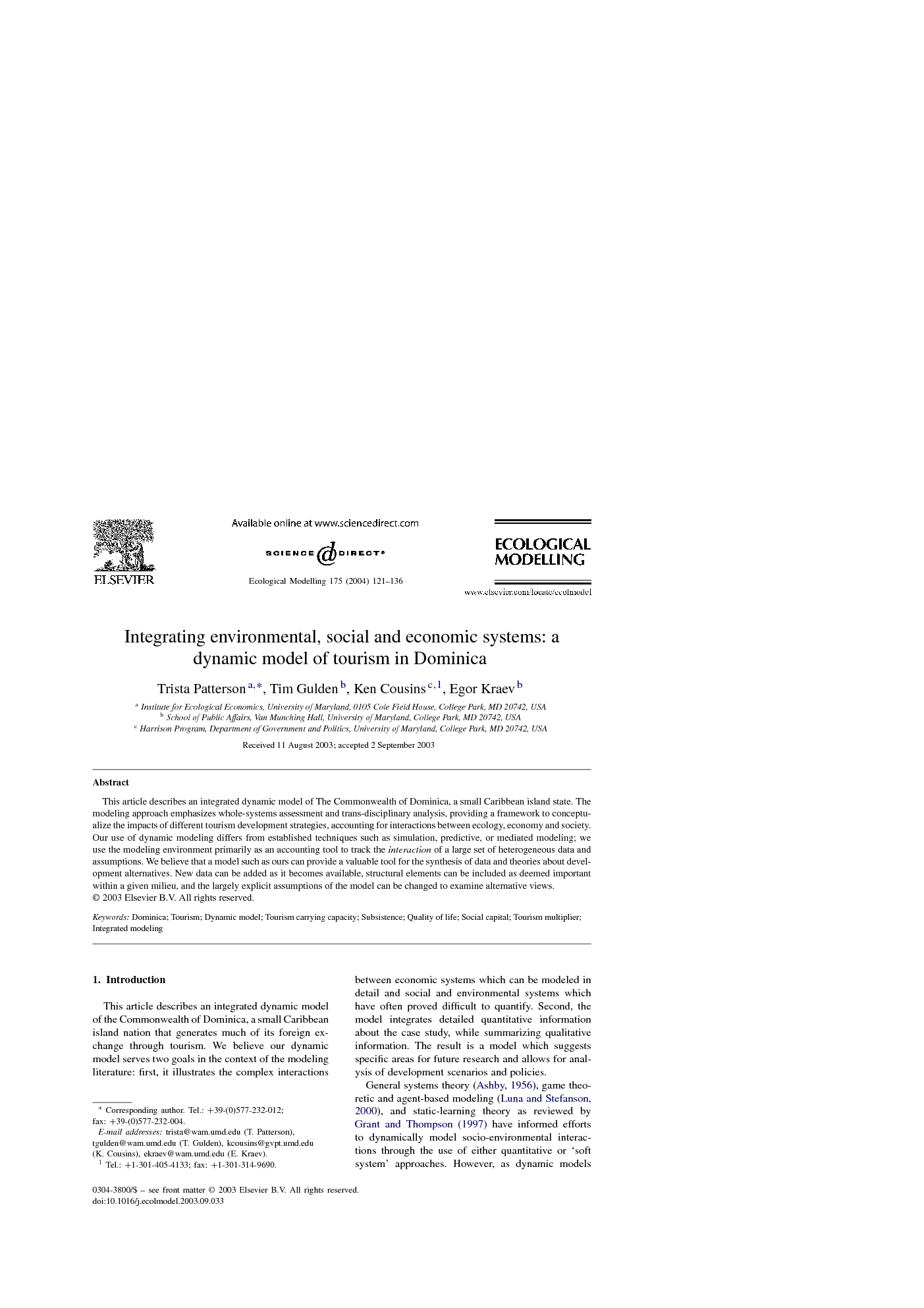 This article describes an integrated dynamic model of The Commonwealth of Dominica, a small Caribbean island state. The modeling approach emphasizes whole-systems assessment and trans-disciplinary analysis, providing a framework to conceptualize the impacts of different tourism development strategies, accounting for interactions between ecology, economy and society. Our use of dynamic modeling differs from established techniques such as simulation, predictive, or mediated modeling; we use the modeling environment primarily as an accounting tool to track the interaction of a large set of heterogeneous data and assumptions. We believe that a model such as ours can provide a valuable tool for the synthesis of data and theories about development alternatives. New data can be added as it becomes available, structural elements can be included as deemed important within a given milieu, and the largely explicit assumptions of the model can be changed to examine alternative views.

This article describes an integrated dynamic model of the Commonwealth of Dominica, a small Caribbean island nation that generates much of its foreign exchange through tourism. We believe our dynamic model serves two goals in the context of the modeling literature: first, it illustrates the complex interactions between economic systems which can be modeled in detail and social and environmental systems which have often proved difficult to quantify. Second, the model integrates detailed quantitative information about the case study, while summarizing qualitative information. The result is a model which suggests specific areas for future research and allows for analysis of development scenarios and policies. General systems theory (Ashby, 1956), game theoretic and agent-based modeling (Luna and Stefanson, 2000), and static-learning theory as reviewed by Grant and Thompson (1997) have informed efforts to dynamically model socio-environmental interactions through the use of either quantitative or ‘soft system’ approaches. However, as dynamic models are increasingly being used to illustrate trends in ecological–economic interaction when long-term experimentation is not feasible (Costanza et al., 1993; Costanza and Voinov, 2001), the mix of quantitative and qualitative data within the same dynamic model, while rare, is increasingly necessary to address problems of social and environmental importance (Kane and O’Reilly-de Brun, 2001). Our modeling approach draws on the ideas of ecological economics (Cumberland et al., 1997), placing emphasis on whole-systems assessment. Our goal is to provide a framework to conceptualize the impacts of various tourism development strategies over a time scale of several decades, while taking into account interactions and feedback loops between ecology, economy, and society to the fullest extent allowed by available data and theory. 1.1. Case study selection We selected Dominica as a case study due to the prominence of tourism issues as a development concern for the island (Patterson and Rodriguez, 2003). Furthermore, we were compelled by anecdotal reports of relatively intact forest cover, the high prevalence of people subsisting directly from forest and marine resources, and the presence of a West-African matrilineal heritage which suggested the importance of non-market economic activity among extra-familial networks. Because the benefits of non-market exchanges and subsistence activities are rarely fully integrated into cost–benefit analyses, we felt an attempt to model some of these interactions within the context of system dynamics would make a needed contribution to the discussion concerning tourism development, for small island nations as well as other traditional communities.

Our use of the dynamic modeling environment differs in important ways from established techniques such as simulation, predictive, or mediated modeling. We use the modeling environment primarily as an accounting tool to track the interaction of a large set of heterogeneous data and assumptions. The expression of our research in terms of a model has forced us to make our assumptions clear and has revealed relationships between the data that we would not have otherwise seen. We had substantial success in calibrating the model to reproduce available data since 1980 as was demonstrated by the figures presented in the various model sections. Fig. 11 tracks the evolution of several key indicators over the 20-year calibration period. All of the indicators display behavior which accords with data and/or anecdotal reports where they were available and with common sense where all data was lacking. While we designed the model primarily for examining long-run scenarios (which will be explored in a future publication), it has also proven useful for elucidating relationships within the economy over the calibration period. These points were discussed in the in the body of the paper, but bear repeating here. First, it would seem that the Dominican government accumulated debt at the rate of government expenditure during the first 5 years after independence. This indicates that the tax collection system was less than effectual at the time, but has improved. However, we note that the budget remains unbalanced. Second, we observe that GDP growth between 1980 and 2000 has been a particularly poor proxy for economic well-being in Dominica. While GDP has nearly doubled over this period in real terms, the size of the internal economy has remained almost constant, as have real wages (see Fig. 11b). One way of understanding this disparity is through the use of the economic concept of the tourism multiplier—the extent to which tourist dollars are re-spent in the local economy, thereby stimulating further economic activity (Lundberg et al., 1995a). As of 1990, Dominica was estimated to have a higher tourism multiplier than most other Caribbean destinations (Weaver, 1991). The model output tends to support this, yielding a multiplier of 2.1 for 1990. By 2000, however, leakage from the Dominican economy had increased markedly and the multiplier effect has diminished accordingly, falling to 1.45. The primary reason would seem to be either a significant increase in foreign ownership of tourist facilities (with foreign owners repatriating profits), or local owners investing their profits abroad (Cater, 1996). We believe that a model such as ours can provide a valuable tool for the synthesis of data and theories about development alternatives. New data can be added as it becomes available and the largely explicit assumptions of the model can be changed to examine alternative views. Such a framework allows one to focus on one part of the system without losing sight of the complex interactions which make up the whole system.