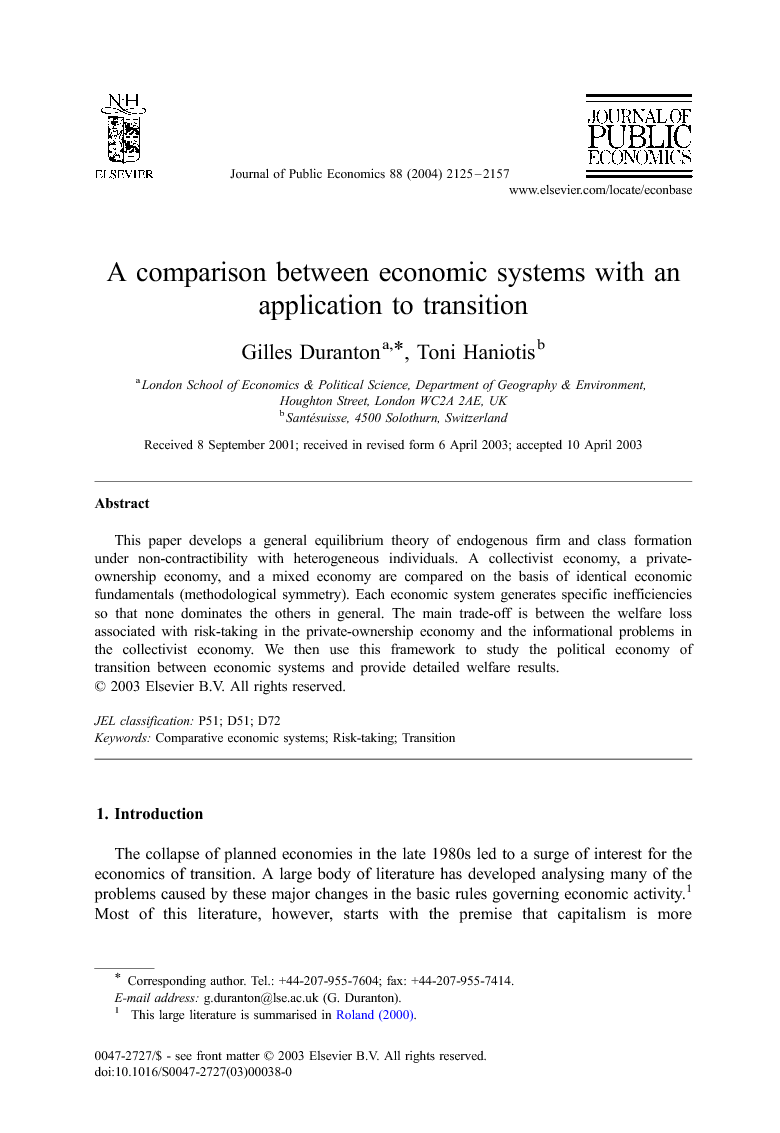 This paper develops a general equilibrium theory of endogenous firm and class formation under non-contractibility with heterogeneous individuals. A collectivist economy, a private-ownership economy, and a mixed economy are compared on the basis of identical economic fundamentals (methodological symmetry). Each economic system generates specific inefficiencies so that none dominates the others in general. The main trade-off is between the welfare loss associated with risk-taking in the private-ownership economy and the informational problems in the collectivist economy. We then use this framework to study the political economy of transition between economic systems and provide detailed welfare results

The theory developed in this paper satisfies methodological symmetry and offers a general equilibrium perspective on comparative economic systems in an economy with endogenous firm creation and class formation. Due to non-contractibility, managerial incentives to discover the productivity of their firm and to hire workers accordingly depend on whether managers own their firms or not. When firms are owned by a collectivist institution, managers can limit their risk exposure by remaining uninformed. The marginal product of labour is then not equalised across plants. In turn, no individual needs to bear risk. In P, with owner-managers who have an incentive to become informed, production is efficient. Entrepreneurs, however, inevitably have to bear risk so that the very risk-averse individuals refrain from becoming entrepreneurs. The resulting shortage of entrepreneurs reduces aggregate output so that either economic system may Pareto dominate the other, depending on the distribution of risk-aversion in the population. Our model of M illustrates the fundamental difficulties associated with the co-existence of socialist and capitalist economies when the people are free to move from one to the other, i.e. ‘to vote by their feet’. The systems exert a negative externality on each other. P attracts the talented people and leaves C with a high proportion of untalented individuals. C, in turn, increases the shortage of entrepreneurs by exerting an upward pressure on the wages in P. The model also displays the conflict of interests between workers and entrepreneurs. If anyone prefers C to P, it will be the risk-averse and less talented individuals who chose to be workers. If anyone prefers P to C, it will be those individuals who want to become entrepreneurs, i.e. the less risk-averse and more talented. This theoretical framework can help us understand various stylised facts of transition economies such as increased inequality after reforms, this inequality being negatively correlated with the amount of privatisation, the identification of winners and losers, and political backlash. Despite the possibility of a vote in favour of reforms, some countries are still governed according to the old rules, often even by the old rulers. This could be simply due to the fact that a majority of the population is extremely risk-averse and, therefore, better-off under a collectivist system than with a market economy, at least in the short-run. Another observation which is consistent with our theory refers to the fact that the political debate in many countries has become polarised on the pro-reform/anti-reform issue. Moderate options are not popular in many countries. Our model proposes an explanation for this since partial reform is the majority’s preferred choice only under very special conditions. Instead, partial reform is more likely to be found in countries where reforms are not democratically decided. China and Vietnam offer examples of countries, where a still significant collectivist sector survives despite the presence of some alternative highly competitive institutions. Of course, our model remains extremely rudimentary and only puts the emphasis on certain aspects of the comparison between economic systems and the transition between them. In particular, our simplifying view of the labour market ignores unemployment. It would also be desirable to relax our extreme assumption of non-contractibility of a plant’s input.27 Among possible extensions, one could also think of the introduction of aggregate risk, since it is difficult to argue that macro-economic risk should not be taken into account during transition. Based on the Knightian theory of entrepreneurship, we have presented a static comparison of economic systems. Although it is often claimed that capitalism has defeated socialism through its superior ability to produce innovations, we are not aware of many formal dynamic models of comparative economic systems in a general equilibrium framework.28 It would be relatively easy, though, to develop a dynamic version of our model. One possible way to capture the Schumpeterian role of entrepreneurs as innovators is at stage 2 of our model. If we assume that managers who decide to become informed can use this information to increase the productivity of their plant, the technology available to an informed successful manager becomes instead of Eq. (2). This gives rise to a dynamic version of the model where the production function of a plant in period t depends on the number n of periods it was run by an informed manager, i.e. With this modification, our model is transformed into a simple endogenous growth model that preserves the main features of our comparison of economic systems. Without the need to specify more details of this dynamic model, it is apparent that the growth rate of the economy in period t will depend on the number of informed successful managers. Together with the fact that in P entrepreneurs always become informed while in C directors may chose to remain uniformed, it follows that P’s performance, relative to C’s, is better in the long run. This would support the view that private ownership is favourable for growth, because it provides better incentives for innovations, while directors of collectivist plants may prefer not to innovate in order to obtain insurance. But even in this dynamic version of the model, extreme risk-aversion still has adverse effects on the outcomes of P and, to a minor extent, of M and C. Specifically, with an infinitely risk-averse society, output and growth in P both tend to zero forever, while in C the growth rate tends to zero but not the output. This indicates that the qualitative nature of all our results would be preserved in a dynamic version of the model that incorporates the Schumpeterian view of entrepreneurship and innovation.