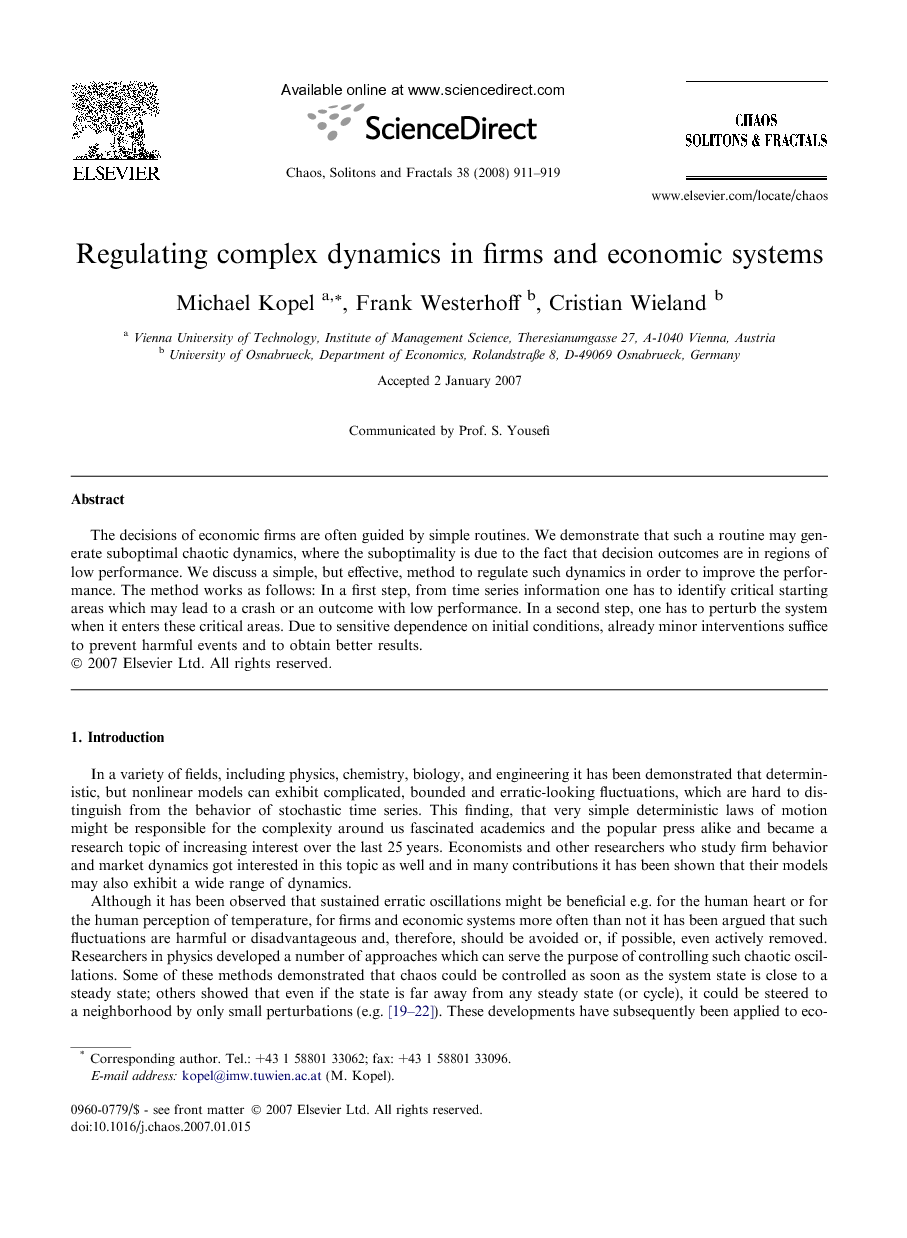 The decisions of economic firms are often guided by simple routines. We demonstrate that such a routine may generate suboptimal chaotic dynamics, where the suboptimality is due to the fact that decision outcomes are in regions of low performance. We discuss a simple, but effective, method to regulate such dynamics in order to improve the performance. The method works as follows: In a first step, from time series information one has to identify critical starting areas which may lead to a crash or an outcome with low performance. In a second step, one has to perturb the system when it enters these critical areas. Due to sensitive dependence on initial conditions, already minor interventions suffice to prevent harmful events and to obtain better results.

In a variety of fields, including physics, chemistry, biology, and engineering it has been demonstrated that deterministic, but nonlinear models can exhibit complicated, bounded and erratic-looking fluctuations, which are hard to distinguish from the behavior of stochastic time series. This finding, that very simple deterministic laws of motion might be responsible for the complexity around us fascinated academics and the popular press alike and became a research topic of increasing interest over the last 25 years. Economists and other researchers who study firm behavior and market dynamics got interested in this topic as well and in many contributions it has been shown that their models may also exhibit a wide range of dynamics. Although it has been observed that sustained erratic oscillations might be beneficial e.g. for the human heart or for the human perception of temperature, for firms and economic systems more often than not it has been argued that such fluctuations are harmful or disadvantageous and, therefore, should be avoided or, if possible, even actively removed. Researchers in physics developed a number of approaches which can serve the purpose of controlling such chaotic oscillations. Some of these methods demonstrated that chaos could be controlled as soon as the system state is close to a steady state; others showed that even if the state is far away from any steady state (or cycle), it could be steered to a neighborhood by only small perturbations (e.g. [19], [20], [21] and [22]). These developments have subsequently been applied to economic models and it has been demonstrated that these techniques work quite effectively (see for example, [25], [18], [1], [12], [13], [2] and [7]). There might be several reasons, however, why an application of such sophisticated techniques either might not improve the system’s performance or might not be even applicable, in particular for applications in economics. Let us consider the first point that taming chaotic oscillations might not be preferable to a situation without intervention. It has been shown, for example, that in economic models chaotic time paths can actually be the solutions to dynamic optimization problems and therefore be superior to steady state behavior with respect to some long-run performance measures (see e.g. [3] and [11]). The same observation has been made for models with (only) boundedly rational decision makers, who are interested in solving optimization problems with a rather short time horizon (this might be due to informational constraints or information-processing capabilities); see e.g. [10], [14] and [15]. Certainly, in such situations getting rid of fluctuations might not be a preferable choice. In this paper, we are more interested in the second point, namely that these techniques might not even be applicable or suitable for the management of a firm or the policy maker in an economic system. It is a fact that the laws governing the dynamics of economic or market systems are not known. Furthermore, and maybe in contrast to the natural sciences, experiments are hard to conduct and the historical time series obtained from real-world observations are too short to reliably reconstruct these laws from the data. Finally, large interventions might be prohibitively costly or even impossible for managers and policy makers. Hence, even if erratic fluctuations are not desirable, these constraints oftentimes renders sophisticated controlling-techniques ineffective. What is needed in such a situation is a rather robust and simple method, which effectively improves the performance of the firm or the economic system despite those limitations. In this paper, we introduce such an approach and illustrate its workings by applying it to an economic model introduced by Kopel [13]. Our idea is based on the following observation. If we consider the state variables of a dynamical system and a performance measure (e.g. profit, sales revenue, unemployment, the growth rate, etc.) which depends on these state variables, then certainly there will be regions in the phase space where the performance is low while in others it will be high. It might also be the case that some regions should be completely avoided because it has bad or even disastrous consequences if the trajectory passes through these regions. For example, if the output of a firm is very low then profits may be low or even negative due to fixed costs. If the output is very high, then profits may also be low due to low prices. So very low or very high production levels should be prevented by the management of a firm. We show that, without knowing the law of motion, the decision makers of a firm can discover such critical regions from time series and then make very small and infrequent interventions such that the trajectory does not pass through them. It is illustrated that this may improve the long-run performance of a firm. To have a particular example at hand, we focus on the behavior of firms. However, it should be clear that the method is more general and may be applied to a much wider range of dynamic economic systems.

Nonlinear dynamical systems may display erratic fluctuations, including regular dramatic changes. In economics, such events may stand for firms going bankrupt, severe business cycles, and stock market crashes. In this paper, we discuss a method to regulate potentially harmful chaotic dynamics. The main point of the method is to learn certain intervention points in advance of the crashes. Application of the method needs no knowledge of the underlying system dynamics but only time series information. Another advantage is that our method only requires rare and small interventions. We have demonstrated the working of the method by relying on a simple model of firm behavior. Besides preventing output to fall below a pre-specified value, it has turned out that the interventions may also increase average long-term sales revenues and average long-term profits. Our simulations also give strong evidence that the method is robust with respect to noise.