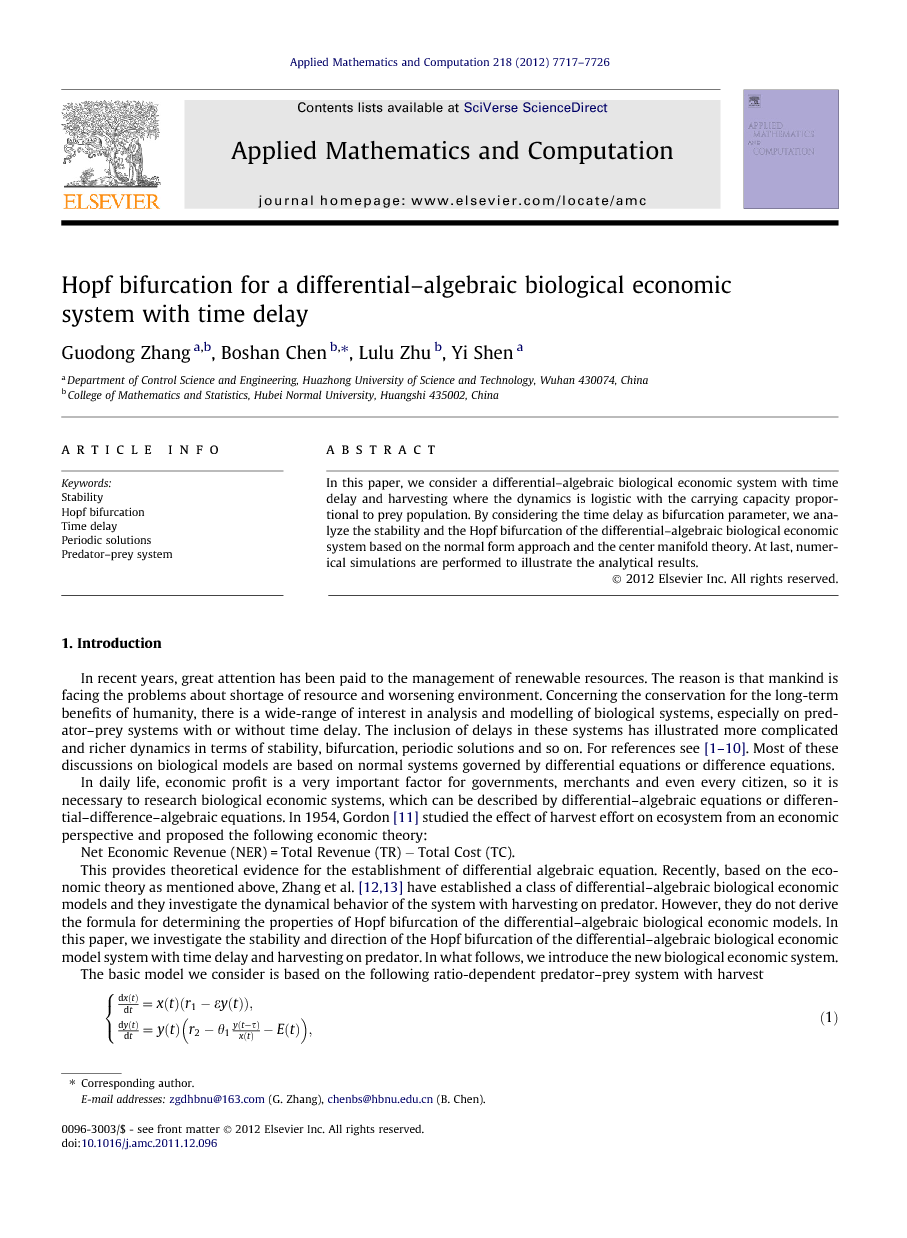 In this paper, we consider a differential–algebraic biological economic system with time delay and harvesting where the dynamics is logistic with the carrying capacity proportional to prey population. By considering the time delay as bifurcation parameter, we analyze the stability and the Hopf bifurcation of the differential–algebraic biological economic system based on the normal form approach and the center manifold theory. At last, numerical simulations are performed to illustrate the analytical results.

In recent years, great attention has been paid to the management of renewable resources. The reason is that mankind is facing the problems about shortage of resource and worsening environment. Concerning the conservation for the long-term benefits of humanity, there is a wide-range of interest in analysis and modelling of biological systems, especially on predator–prey systems with or without time delay. The inclusion of delays in these systems has illustrated more complicated and richer dynamics in terms of stability, bifurcation, periodic solutions and so on. For references see [1], [2], [3], [4], [5], [6], [7], [8], [9] and [10]. Most of these discussions on biological models are based on normal systems governed by differential equations or difference equations. In daily life, economic profit is a very important factor for governments, merchants and even every citizen, so it is necessary to research biological economic systems, which can be described by differential–algebraic equations or differential–difference–algebraic equations. In 1954, Gordon [11] studied the effect of harvest effort on ecosystem from an economic perspective and proposed the following economic theory: Net Economic Revenue (NER) = Total Revenue (TR) − Total Cost (TC). This provides theoretical evidence for the establishment of differential algebraic equation. Recently, based on the economic theory as mentioned above, Zhang et al. [12] and [13] have established a class of differential–algebraic biological economic models and they investigate the dynamical behavior of the system with harvesting on predator. However, they do not derive the formula for determining the properties of Hopf bifurcation of the differential–algebraic biological economic models. In this paper, we investigate the stability and direction of the Hopf bifurcation of the differential–algebraic biological economic model system with time delay and harvesting on predator. In what follows, we introduce the new biological economic system. The basic model we consider is based on the following ratio-dependent predator–prey system with harvest where r1,r2r1,r2 represent growth rate of the prey and predator, respectively, εε and θ1θ1 are positive constants, and ττ denotes the delay time for the prey density, x(t)x(t) and y(t)y(t) can be interpreted as the densities of prey and predator populations at time t, respectively, E(t)E(t) represents harvesting effort, yE(t)yE(t) indicate that the harvests for prey and predator population are proportional to their densities at time t. When there is no harvesting was considered by Çelik [7] in detail. In this model, predator density is logistic with time delay and the carrying capacity proportional to prey density. Notice that, in model (1) the carrying capacity is not constant but proportional to prey density that changes the dynamical structure in different aspects. According to Gordon [10] economic theory equation as mentioned above, we let NER = m, TR=pE(t)y(t)TR=pE(t)y(t) and TC=cE(t)TC=cE(t), where p>0p>0 is harvesting reward per unit harvesting effort for unit weight predator, c>0c>0 is harvesting cost per unit harvesting effort for predator, m>0m>0 is the economic profit, then, we can obtain a biological economic system expressed by differential–algebraic equation as follows: The organization of this paper is as follows: regarding ττ as bifurcation parameter, we study the stability of the equilibrium point of the system (2) and Hopf bifurcation of the positive equilibrium depending on ττ where we show that the positive equilibrium loses its stability and the system (2) exhibits Hopf bifurcation in the second section. Then, based on the new normal form of the differential–algebraic system introduced by Chen et al. [15] and the normal form approach theory and center manifold theory introduced by Hassard et al. [18], we derive the formula for determining the properties of Hopf bifurcation of the system in the third section. Numerical simulations aimed at justifying the theoretical analysis will be reported in Section 4. Finally, this paper ends with a discussion.