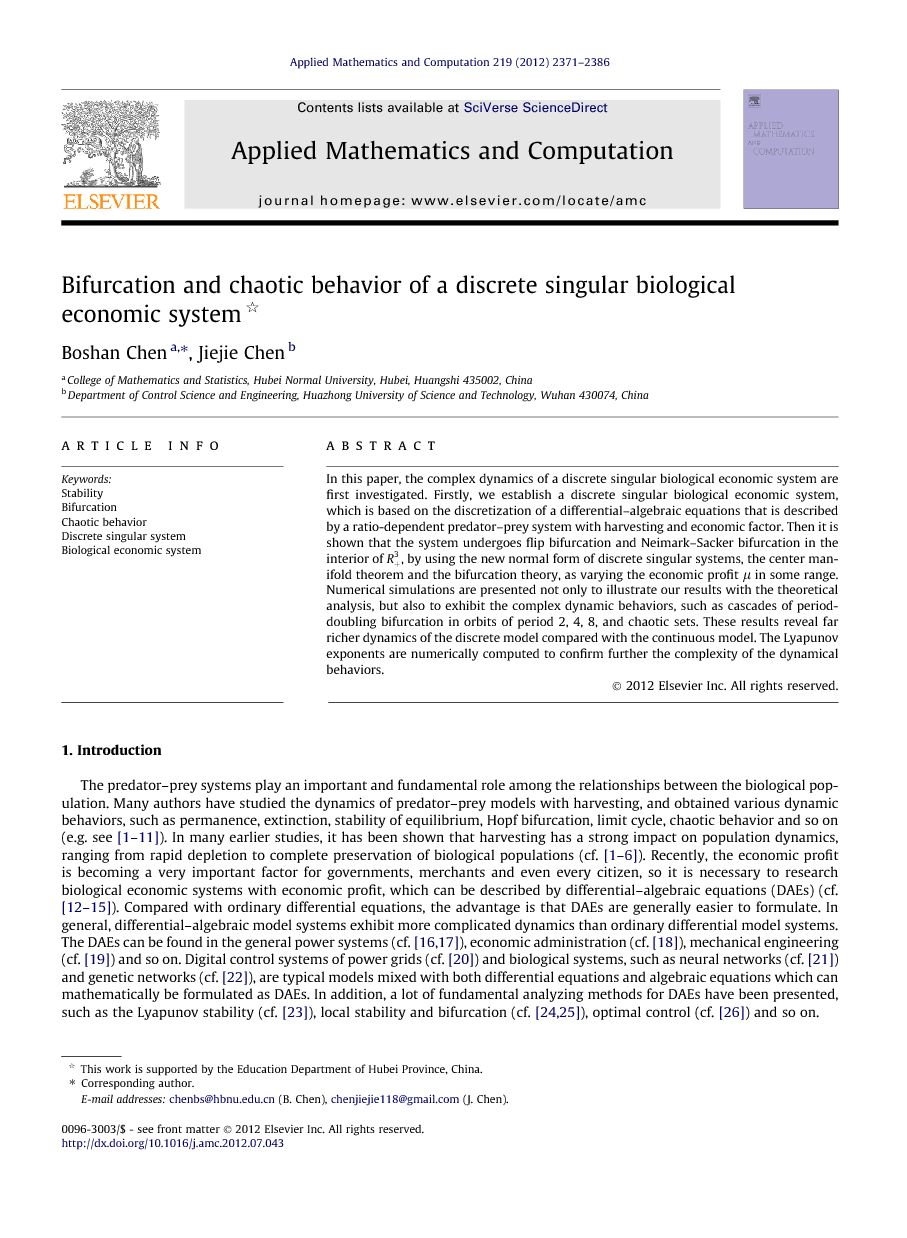 In this paper, the complex dynamics of a discrete singular biological economic system are first investigated. Firstly, we establish a discrete singular biological economic system, which is based on the discretization of a differential–algebraic equations that is described by a ratio-dependent predator–prey system with harvesting and economic factor. Then it is shown that the system undergoes flip bifurcation and Neimark–Sacker bifurcation in the interior of View the MathML sourceR+3, by using the new normal form of discrete singular systems, the center manifold theorem and the bifurcation theory, as varying the economic profit μμ in some range. Numerical simulations are presented not only to illustrate our results with the theoretical analysis, but also to exhibit the complex dynamic behaviors, such as cascades of period-doubling bifurcation in orbits of period 2, 4, 8, and chaotic sets. These results reveal far richer dynamics of the discrete model compared with the continuous model. The Lyapunov exponents are numerically computed to confirm further the complexity of the dynamical behaviors.

The predator–prey systems play an important and fundamental role among the relationships between the biological population. Many authors have studied the dynamics of predator–prey models with harvesting, and obtained various dynamic behaviors, such as permanence, extinction, stability of equilibrium, Hopf bifurcation, limit cycle, chaotic behavior and so on (e.g. see [1], [2], [3], [4], [5], [6], [7], [8], [9], [10] and [11]). In many earlier studies, it has been shown that harvesting has a strong impact on population dynamics, ranging from rapid depletion to complete preservation of biological populations (cf. [1], [2], [3], [4], [5] and [6]). Recently, the economic profit is becoming a very important factor for governments, merchants and even every citizen, so it is necessary to research biological economic systems with economic profit, which can be described by differential–algebraic equations (DAEs) (cf. [12], [13], [14] and [15]). Compared with ordinary differential equations, the advantage is that DAEs are generally easier to formulate. In general, differential–algebraic model systems exhibit more complicated dynamics than ordinary differential model systems. The DAEs can be found in the general power systems (cf. [16] and [17]), economic administration (cf. [18]), mechanical engineering (cf. [19]) and so on. Digital control systems of power grids (cf. [20]) and biological systems, such as neural networks (cf. [21]) and genetic networks (cf. [22]), are typical models mixed with both differential equations and algebraic equations which can mathematically be formulated as DAEs. In addition, a lot of fundamental analyzing methods for DAEs have been presented, such as the Lyapunov stability (cf. [23]), local stability and bifurcation (cf. [24] and [25]), optimal control (cf. [26]) and so on. On the other hands, many scholars have paid attention to the discrete population models, since the discrete time models governed by discrete systems are more appropriate than the continuous ones when the populations have nonoverlapping generations (cf. [27], [28], [29] and [30]). Moreover, since the discrete time models can also provide efficient computational models of continuous models for numerical simulations, it is reasonable to study discrete time models governed by discrete systems. From above, we know that the discretization of a differential–algebraic system can be a discrete singular systems. Therefore, it is also important to research various dynamic behaviors of discrete singular systems (cf. [31], [32] and [33]). However, to our knowledge, so far there have been no attempts in the study of the bifurcation and chaos of the discrete singular systems. The aim of this paper is to investigate the bifurcation and chaos of a discrete singular predator–prey systems by using bifurcation theory (cf. [36] and [37]) and center manifold theory (cf. [36], [37] and [38]). The rest of this paper is organized as follows: A discrete singular predator–prey system is established in Section 2. We discuss the existence and stability of fixed points for this system in the closed positive cone View the MathML sourceR+3 in Section 3. We show that this system undergoes the flip bifurcation and the Neimark–Sacker bifurcation in the interior of View the MathML sourceR+3 in Section 4. We present numerical simulations, which not only illustrate our results with the theoretical analysis, but also exhibit the complex dynamical behaviors such as cascades of period-doubling bifurcation in orbits with period 2, 4, 8, and chaotic sets, the Lyapunov exponents are computed numerically to confirm the dynamical behaviors in Section 5. A brief discussion is given in Section 6.