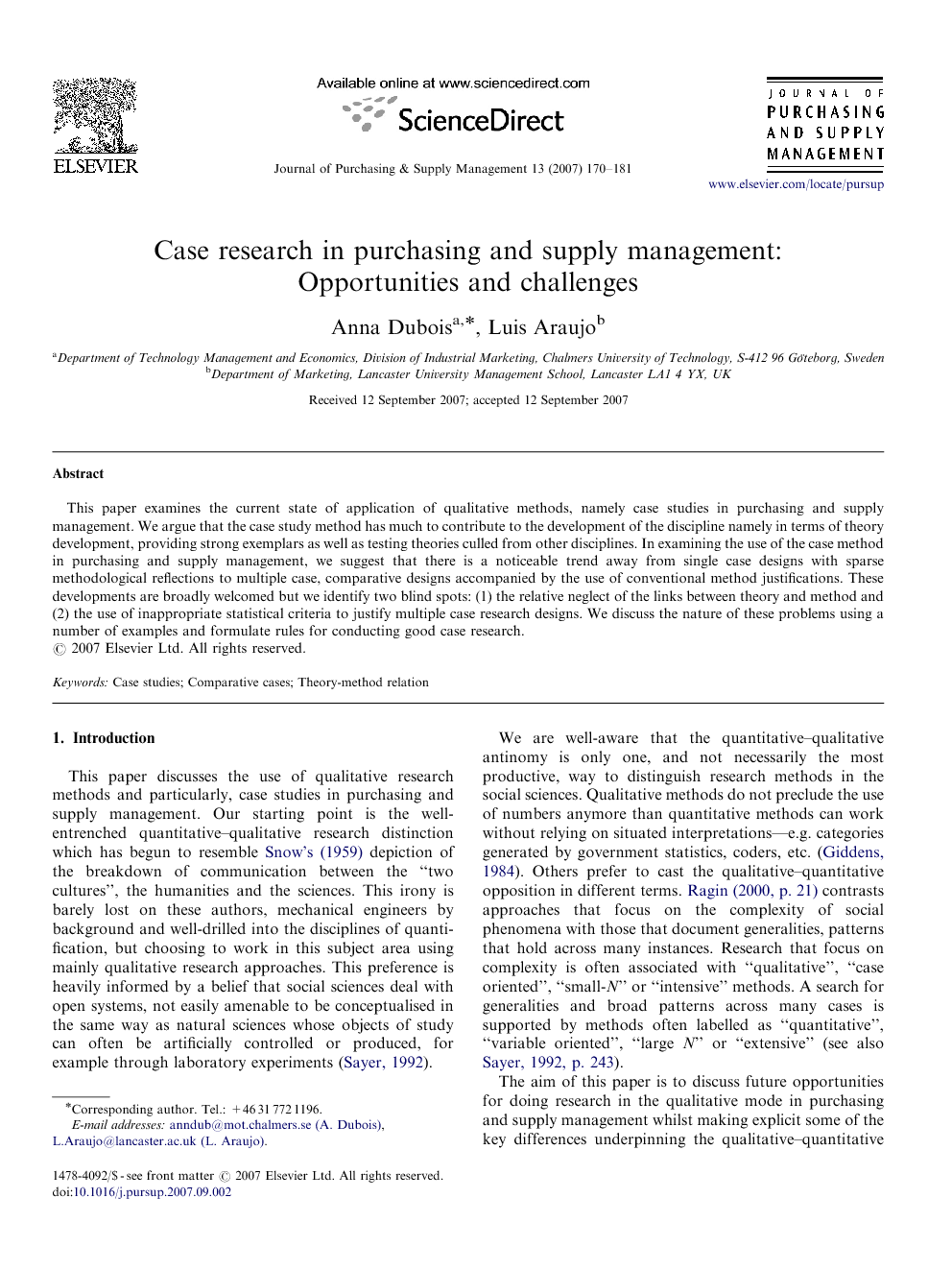 This paper examines the current state of application of qualitative methods, namely case studies in purchasing and supply management. We argue that the case study method has much to contribute to the development of the discipline namely in terms of theory development, providing strong exemplars as well as testing theories culled from other disciplines. In examining the use of the case method in purchasing and supply management, we suggest that there is a noticeable trend away from single case designs with sparse methodological reflections to multiple case, comparative designs accompanied by the use of conventional method justifications. These developments are broadly welcomed but we identify two blind spots: (1) the relative neglect of the links between theory and method and (2) the use of inappropriate statistical criteria to justify multiple case research designs. We discuss the nature of these problems using a number of examples and formulate rules for conducting good case research.

This paper discusses the use of qualitative research methods and particularly, case studies in purchasing and supply management. Our starting point is the well-entrenched quantitative–qualitative research distinction which has begun to resemble Snow's (1959) depiction of the breakdown of communication between the “two cultures”, the humanities and the sciences. This irony is barely lost on these authors, mechanical engineers by background and well-drilled into the disciplines of quantification, but choosing to work in this subject area using mainly qualitative research approaches. This preference is heavily informed by a belief that social sciences deal with open systems, not easily amenable to be conceptualised in the same way as natural sciences whose objects of study can often be artificially controlled or produced, for example through laboratory experiments (Sayer, 1992). We are well-aware that the quantitative–qualitative antinomy is only one, and not necessarily the most productive, way to distinguish research methods in the social sciences. Qualitative methods do not preclude the use of numbers anymore than quantitative methods can work without relying on situated interpretations—e.g. categories generated by government statistics, coders, etc. (Giddens, 1984). Others prefer to cast the qualitative–quantitative opposition in different terms. Ragin (2000, p. 21) contrasts approaches that focus on the complexity of social phenomena with those that document generalities, patterns that hold across many instances. Research that focus on complexity is often associated with “qualitative”, “case oriented”, “small-N” or “intensive” methods. A search for generalities and broad patterns across many cases is supported by methods often labelled as “quantitative”, “variable oriented”, “large N” or “extensive” (see also Sayer, 1992, p. 243). The aim of this paper is to discuss future opportunities for doing research in the qualitative mode in purchasing and supply management whilst making explicit some of the key differences underpinning the qualitative–quantitative divide. In addition, we do not wish to conclude with a plea for a hybrid or mixed methods alternative despite the increasing attention this topic is attracting (see Bryman, 2006). Instead, we want to focus on exploring associations between theory and method and avoiding inconsistent research aims (e.g. using qualitative methods but pursuing explanatory aims better suited to quantitative approaches). We follow Abbott's (2001) suggestion concerning the need for a close alignment between theories, explanations, methods, and research programmes in ways that make them resonate with and support each other. In short, we strongly believe that methodological choices cannot be divorced from theoretical positions nor can theories be regarded as method-neutral. Ackroyd and Hughes (1992, p. 9) noted the increasing tendency for methods to be treated as independent of theory, as toolkits deployable to any set of research tasks. A brief look at the history of research methods reveals that the development of methods were often associated with the development of theoretical approaches—e.g. the work of the arch-quantifier Paul Lazarsfeld at Columbia was influenced by particular conceptions of society and social science made in the image of the natural sciences. Abbott (2001, p. 189) argues that any methodology parses the social world in particular ways and thus contains elements of an implicit theory. Social surveys, for example, assume that collectivities can be studied by focusing on questioning randomly selected individuals and the analyst can subsequently move between levels of analysis without problems (Ackroyd and Hughes, 1992). As Abbott (1997, p. 1162) explains, surveys rely on decomposition and decontextualisation of social phenomena, which allows the production of data sets where contextual effects are reduced to interaction between variables and contextual causation deliberately minimised. By contrast, case researchers see cases as complex configurations of events and structures in situated spatial and temporal contexts, which preserve the integral character of social phenomena and which the analyst believes exhibits the operation of some identified theoretical principle (Mitchell, 1983; Ragin, 1997). The two methodological approaches identified above contain very different implicit theories about the social world and imply a very different set of research tasks. Survey-based approaches assume social phenomena are decomposable in smaller units and measurable. Methodological tasks focus on appropriate ways to parse the social world, specify variable properties and measurement strategies as a precursor to the use of quantitative data analysis techniques. Case-based approaches have different concerns. There are no ready-made ways to parse the social world. The task of the analyst is to progressively construct the context and boundaries of the phenomena under investigation, as theory interacts with methodological decisions and empirical observations. The research object, its boundaries and context are often emergent outcomes of the research process. Our focus in this paper will be on the use of the case study method in purchasing and supply management, in light of recent debates in the social sciences (see, e.g. George and Bennett, 2005) and management studies (see, e.g. Dubois and Araujo, 2004; Ahrens and Chapman, 2006) regarding qualitative methods. In particular, we want to examine how the case study method has been put to use and what justifications have been advanced for its use within the literature. The structure of this paper is as follows: in Section 2, we will discuss the relationship between theory and method in case research. In Section 3, we will reflect on some of the problems and pitfalls associated with the use of the case study method in a number of examples culled from the purchasing and supply management literature. In Section 4 we will discuss five rules of good practice in using the case method and in the final section we derive some implications of our arguments for the practice of case research.

This paper has examined the current state of the use of qualitative methods, in particular case studies, in the purchasing and supply management field. More specifically, we have examined the relationship between theory and method and the contrasting logics underpinning qualitative and quantitative research. As a result of our survey of the field, we proposed a number of case method rules that encapsulate our beliefs regarding good practice in the conduct of case study research. Our concluding argument is not to advocate a mixed methods approach or suggest a better balance between quantitative and qualitative methodologies. Rather than focus on the divide between qualitative and quantitative methods, we argue that it is more productive to consider the nexus between theory and method and ask more pertinent questions about how a field can advance through the pursuit of theoretical and methodological agendas as well as improving the connections between theory and method. We suggested earlier that disciplines can benefit from the development of strong exemplars and suggested that case studies can often serve that purpose, acting as a reference points for theory development as well as classic instances of particular phenomena. We argued that case studies should not be seen simply as inductive tools, an advance column marching ahead of the larger armies of quantitative researchers. Cases can also serve as important complements to quantitative research, testing theories in concrete instances and helping to refine their scope of applicability. Our advocacy of cases studies method revolves around the strong theory–data connection that underpins this method. The selection of cases and the very process of declaring “what a case is” are driven by theoretical aims and criteria. Theory is intimately involved in the process of “casing” (Ragin, 1992b and Ragin, 1997), bringing closure to the relationship between theoretical concepts and empirical evidence. This is not to say that the strong theory–methods connection is the sole preserve of case research but it is especially strong and transparent in good case research. A neglect of the theory–method link smuggles in its own set of problems and challenges. Researchers selecting methods without due attention to their implicit assumptions and coherence with theoretical aims risk incoherent conclusions or falling into the trap of brute empiricism. In conclusion, we need further variety in theoretical agendas and the appropriate methods to support the development of those agendas in purchasing and supply management research. Our plea is that researchers, both quantitative and qualitative, contemplate theoretical and methodological developments in tandem, rather than seeing theoretical development as a self-contained endeavour or methods as neutral tools at the service of theory development and testing.