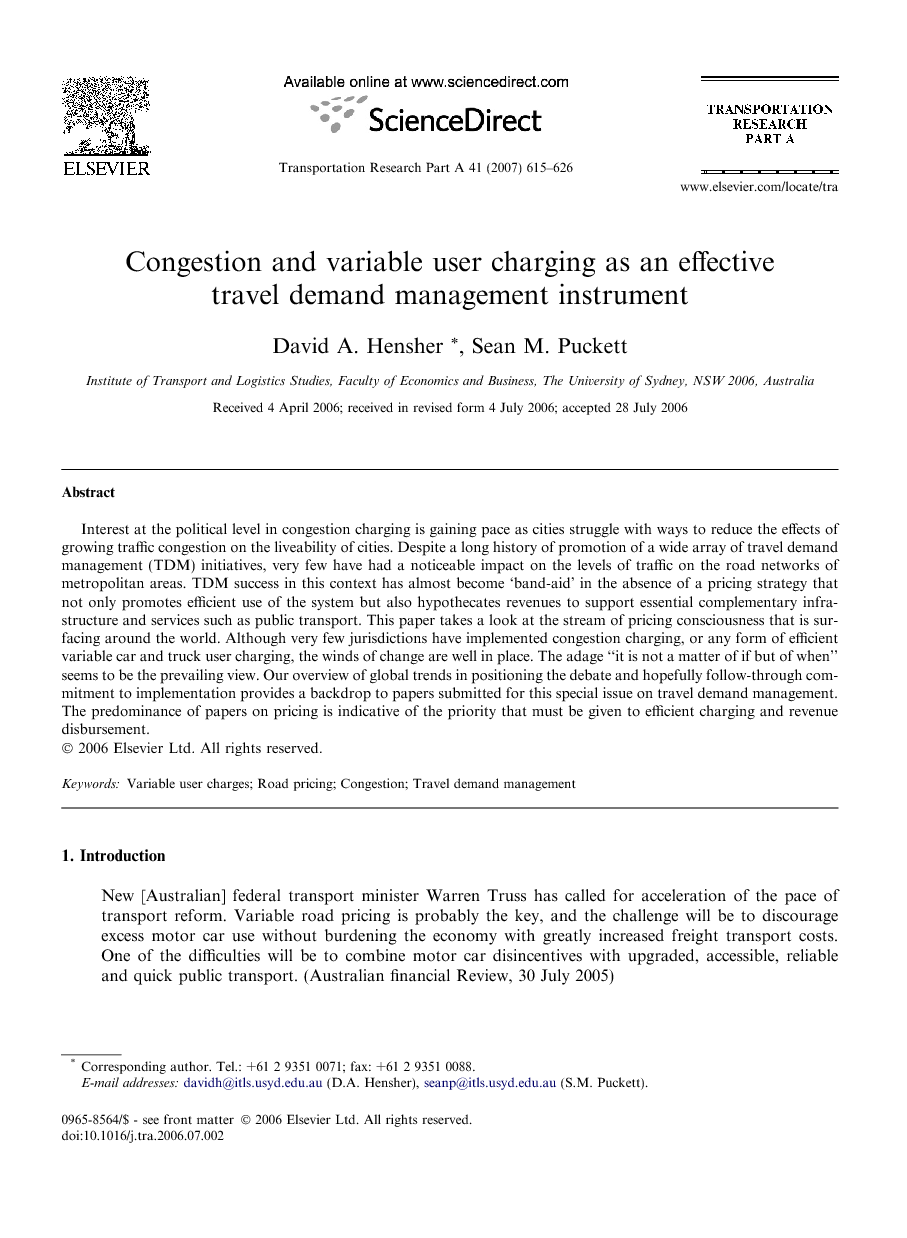 Interest at the political level in congestion charging is gaining pace as cities struggle with ways to reduce the effects of growing traffic congestion on the liveability of cities. Despite a long history of promotion of a wide array of travel demand management (TDM) initiatives, very few have had a noticeable impact on the levels of traffic on the road networks of metropolitan areas. TDM success in this context has almost become ‘band-aid’ in the absence of a pricing strategy that not only promotes efficient use of the system but also hypothecates revenues to support essential complementary infrastructure and services such as public transport. This paper takes a look at the stream of pricing consciousness that is surfacing around the world. Although very few jurisdictions have implemented congestion charging, or any form of efficient variable car and truck user charging, the winds of change are well in place. The adage “it is not a matter of if but of when” seems to be the prevailing view. Our overview of global trends in positioning the debate and hopefully follow-through commitment to implementation provides a backdrop to papers submitted for this special issue on travel demand management. The predominance of papers on pricing is indicative of the priority that must be given to efficient charging and revenue disbursement.

New [Australian] federal transport minister Warren Truss has called for acceleration of the pace of transport reform. Variable road pricing is probably the key, and the challenge will be to discourage excess motor car use without burdening the economy with greatly increased freight transport costs. One of the difficulties will be to combine motor car disincentives with upgraded, accessible, reliable and quick public transport. (Australian financial Review, 30 July 2005) Congestion charging is growing in popularity as an effective instrument in responding to the concerns about high levels of traffic congestion.1 Although the economic arguments have been known for decades and the technological capability is now widely available (in the last 15 years), the last bastion of constraint, namely political will, is starting to move in support of implementation. The London experience (Fig. 1) is being used as a catalyst for a broader recognition of what can be done without a political backlash. Congestion has been worsening for many reasons including the increased demand for road space serving major activity centres due to growth in population, economic activity, and incomes; provision of capacity has lagged behind demand growth; each road-user considers only costs and benefits to that road-user of driving in congested conditions, and ignores congestion costs imposed on others; access to crowded roads is not rationed by prices; indirect road-use charges via fuel taxes are remotely linked to use of congested roads, and other vehicle taxes are independent of time and location of vehicle-use. With the problem of congested roads likely to get considerably worse over the coming years, this places traffic congestion high on government agendas; however it does not mean that pricing will also be high on the agenda (Hensher and Puckett, 2005). However the charging concept may be more politically palatable, in the transition phase, if it is seen to be ‘neutral’ to key stakeholders such as hauliers and car drivers in terms of cost. This would require government removing or reducing vehicle licence duty and/or having freight companies able to pass on the new costs to customers. Freight companies have much to gain from relatively uncongested roads in terms of opportunity costs (including the number of vehicles required to achieve a specific task set). Less congested roads would also have an indirect benefit to driver recruitment. The growing interest in congestion charging appears to be primarily Euro-centric2 and probably Australasian,3 despite the recognition that Singapore was there well before anyone else. Countries that can benefit now by such a charging scheme such as China are still focusing on capacity (or what might be seen as ‘catch up’). For example, road capacity in Beijing is forecast to rise by 30% between 2006 and 2010; although this is still believed to be insufficient to accommodate rising car usage. By the end of the decade, average speeds in the Beijing city centre will be in the region of 20 kph. At present, the city has become synonymous with severe traffic jams, particularly around its second and fourth ring roads.4 In the past three years, an additional 1.36 million motor vehicles have been acquired by residents, which equates to an increase of 1,000 vehicles per month. By the end of 2005, ownership had reached 2.59 million vehicles, which is estimated to grow to 3.2 million by 2008 and to 3.5 million by 2010. In his paper we provide an overview of some global trends in positioning the debate and hopefully follow-through commitment to implementation as a backdrop to papers submitted for this special issue on travel demand management. The predominance of papers on pricing is indicative of the priority that is being given (at least in research) to efficient charging and revenue disbursement.