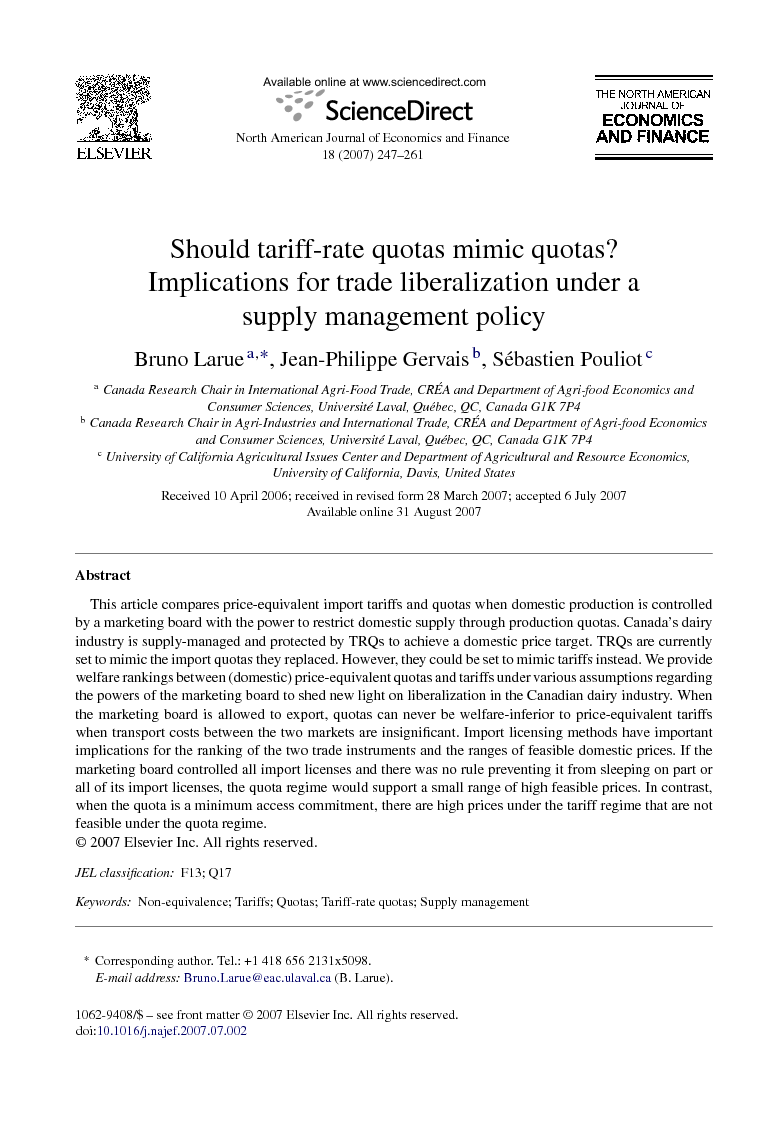 This article compares price-equivalent import tariffs and quotas when domestic production is controlled by a marketing board with the power to restrict domestic supply through production quotas. Canada's dairy industry is supply-managed and protected by TRQs to achieve a domestic price target. TRQs are currently set to mimic the import quotas they replaced. However, they could be set to mimic tariffs instead. We provide welfare rankings between (domestic) price-equivalent quotas and tariffs under various assumptions regarding the powers of the marketing board to shed new light on liberalization in the Canadian dairy industry. When the marketing board is allowed to export, quotas can never be welfare-inferior to price-equivalent tariffs when transport costs between the two markets are insignificant. Import licensing methods have important implications for the ranking of the two trade instruments and the ranges of feasible domestic prices. If the marketing board controlled all import licenses and there was no rule preventing it from sleeping on part or all of its import licenses, the quota regime would support a small range of high feasible prices. In contrast, when the quota is a minimum access commitment, there are high prices under the tariff regime that are not feasible under the quota regime.

Focusing on tariff reductions in the early days of the GATT was most useful as industrial tariffs averaged roughly 40%. Now these tariffs average about 4% (OECD, 2003). Similarly, many quantitative barriers to trade in industrial products were eliminated. The objective set out in the late 1940s to lower tariffs on industrial goods is nearly achieved. While the agri-food sector was not totally excluded from the rounds of multilateral trade negotiations that preceded the Uruguay Round, it is fair to say that not much was accomplished prior to 1994. One of the greatest achievements of the Uruguay Round (UR) was arguably the conversion of all non-tariff barriers (NTBs) in agriculture into bound tariffs using an average price gap method over the 1986–88 base period. Unfortunately, the reference period permitted extremely high bound tariffs to be proposed. These proposed tariffs threatened historic market access levels that prevailed under the previous NTBs and were deemed unacceptable by exporters. To protect market access and further encourage liberalization, WTO members agreed to introduce tariff-rate quotas (TRQs) in many agri-food sectors to guarantee access to all importing countries’ markets. UR TRQs are two-tier tariffs set such that a first (in-quota) tariff is applied to imports as long as aggregate imports do not exceed a certain quantity or quota, while a second (over-quota) tariff is applied when aggregate imports exceed the quota. For many sensitive sectors, the quota of the TRQ is set close to past import volumes; the in-quota tariff is set at a very low (close to zero) level, while the over-quota is set at a high (prohibitive) level. These TRQs mimic the import quotas they replaced. Because import licensing procedures used to administer TRQs were not disciplined in the UR, importing countries are able to rely on questionable import license allocation methods to protect sectors expected to be adversely affected by trade liberalization (Skully, 2000). TRQs are typically used for agricultural products that have proved resilient to previous liberalization efforts. This is the case with Canada's supply-managed industries and particularly so for the dairy industry. Supply-managed products were excluded from the bilateral Canada-U.S. trade liberalization process initiated in 1989 and TRQs on these products (or products that make use of them) had over-quota tariff rates varying between 240 and 300%. Supply-management programs restrict domestic and import supplies through production quotas and TRQs to attain domestic price targets. Canada is not alone in using supply controls to support domestic prices. For example, similar policies are used in dairy production in the European Union and Japan. The United States had supply controls for tobacco until July of 2005. Supply-management programs in Canada have been an irritant for some of Canada's trading partners, notably the United States and New Zealand. The Doha Round has created much anxiety among Canadian dairy and poultry producers, because there is a great deal of uncertainty regarding the extent and the manner with which TRQs will be liberalized. The July 2004 framework in the Doha Round calls for liberalizing both tariffs and import limits although modalities are still being discussed.1 In this paper, we compare price-equivalent tariffs and quotas when domestic production is restricted by a marketing board that behaves like a monopolist as in Vercammen and Schmitz (1992), and Schmitz, Furtan, and Bayliss (2002).2 Our analysis builds on the small-country models of Kaempfer, McClure, and Willett (1989), and Feldman (1993) that relied on the domestic price to anchor tariff-quota welfare comparisons when domestic production is monopolized. Feldman (1993) also entertained the possibility that a sufficiently protected monopolist could be tempted to export. Other researchers, like Bhagwati (1965), Sweeney, Tower, and Willett (1977), Larue and Lapan (2002), have proposed different variables, like the volume of imports and the share of domestic production in consumption, to anchor tariff-quota welfare comparisons. The domestic price plays a crucial role in the implementation of supply-management programs and this is why it is the variable of choice to anchor our comparisons. More specifically, supply is purposely restricted to achieve a domestic price target revised each year to account for changes in the cost of production of agricultural producers. The viability of such a policy hinges on the ability to restrict imports. The paper is organized as follows. The next section describes how the supply management policy is implemented in the Canadian dairy industry. Section 3 investigates the case where the marketing board must contend with imports from private traders. Section 4 investigates the welfare ranking of the trade instruments when protection and the terms of trade make exporting profitable for the marketing board. The final section summarizes the main results of the paper and their policy implications.

An important agricultural issue in the current Doha Round of multilateral negotiations is the liberalization of sensitive sectors protected by TRQs. In these sectors, domestic prices tend to be much higher than world prices and many politically pressured governments would like to exclude these sectors from significant liberalization initiatives. This is the case for the Canadian dairy industry, which relies on TRQs with prohibitive over-quota tariffs to complement production quotas in restricting supply of milk and dairy products. Canada's dairy supply-management program is explicitly built around a domestic price target which is set to allow dairy producers to cover their cost of production and earn a “fair” return on their labor and capital investment. Canada's ability to adjust its trade barriers is restricted by its obligations as a member of the WTO. Under supply management, a marketing board is given the authority to restrict domestic supply to achieve a domestic price target. We follow previous studies (e.g., Alston & Spriggs, 1998; Vercammen & Schmitz, 1992) in assuming that the board behaves like a constrained monopolist. Currently, Canadian TRQs on milk and dairy products are set to mimic import quotas, but Canada could sets its TRQs to mimic tariffs or simply replace them by tariffs. Our trade liberalization analysis features tariff-quota comparisons for various domestic prices. The welfare ranking between the two instruments boils down to a comparison of sourcing costs, which are conditioned by the positioning of the marginal cost of domestic production and the allocation of import licenses. The first case analyzed represents the actual situation with private traders owning import licenses under the quota. The welfare comparisons are very sensitive to technological assumptions and the level of the domestic price considered. Domestic production is considered efficient (inefficient) when the share of domestic production in consumption under free trade is larger (less) than one half. For highly inefficient (efficient) domestic production, the range of feasible prices is large (small) and the quota (tariff) dominates at virtually all feasible prices. For intermediate levels of efficiency, tariffs and quotas are quite similar, with tariffs (quotas) dominating at low and high price levels and quotas dominating for intermediate price levels. As shown by Kaempfer et al. (1989), domestic prices in the neighborhood of the free trade price cannot be supported by a quota because the profit from domestic production would be too low. Hence, the tariff could be regarded as a more competitive instrument, but in the context of the supply-management policy, the longer range of feasible prices under the tariff and the domination of tariffs at low prices are irrelevant because the policy would collapse before such prices are reached. Romain and Sumner (2001) argue that the small Canadian dairy farms suffer from a productivity gap vis-à-vis their U.S. counterparts. We infer that as long as supply management is in place, Canada is best to rely on quota increases to liberalize trade. However, phasing out supply management could induce rapid increases in farm size and in productivity which, if substantial enough, could warrant a switch in policy prescription. We also compare quota and tariff liberalization by allowing the marketing board to export. This case is justified on the ground that a monopolist has a natural tendency to price-discriminate. As a matter of fact, Canada had put in place a pricing system to facilitate exporting, but the legality of this system was successfully challenged by the United States and New Zealand in a trade dispute that ended in 2003. When exporting is allowed, quotas can never be welfare-inferior to price-equivalent tariffs when transport costs between the two markets are insignificant. If transportation costs are sufficiently high, tariffs can dominate price-equivalent quotas at high domestic prices. Finally, we asked what would be the best way to liberalize if import licenses were under the control of the marketing board. The results depend to a large extent on how the quota is administered. We consider three cases. Under the first one, the quota imposes an upper limit on imports and the marketing board is allowed not to fill the quota. When domestic production is efficient, the board “sleeps” on all quota licenses and the domestic price is always the unconstrained monopolist price. The range of feasible prices when domestic production is inefficient is larger, but remains small. The possibility of not filling the quota makes it a very uncompetitive instrument. The second case forces the marketing board to just fill the quota. Tariffs dominate except at high prices when domestic production is inefficient. The third case treats the quota as a minimum access commitment, allowing imports to exceed the quota. When domestic production is inefficient, the marketing board exercises its option to import more and behaves like a “two-plant” monopolist when the minimum access commitment falls short of the profit-maximizing level of imports. Paradoxically, the quota is a more competitive instrument than the tariff because high domestic prices that can be achieved with tariffs cannot be achieved with quotas!