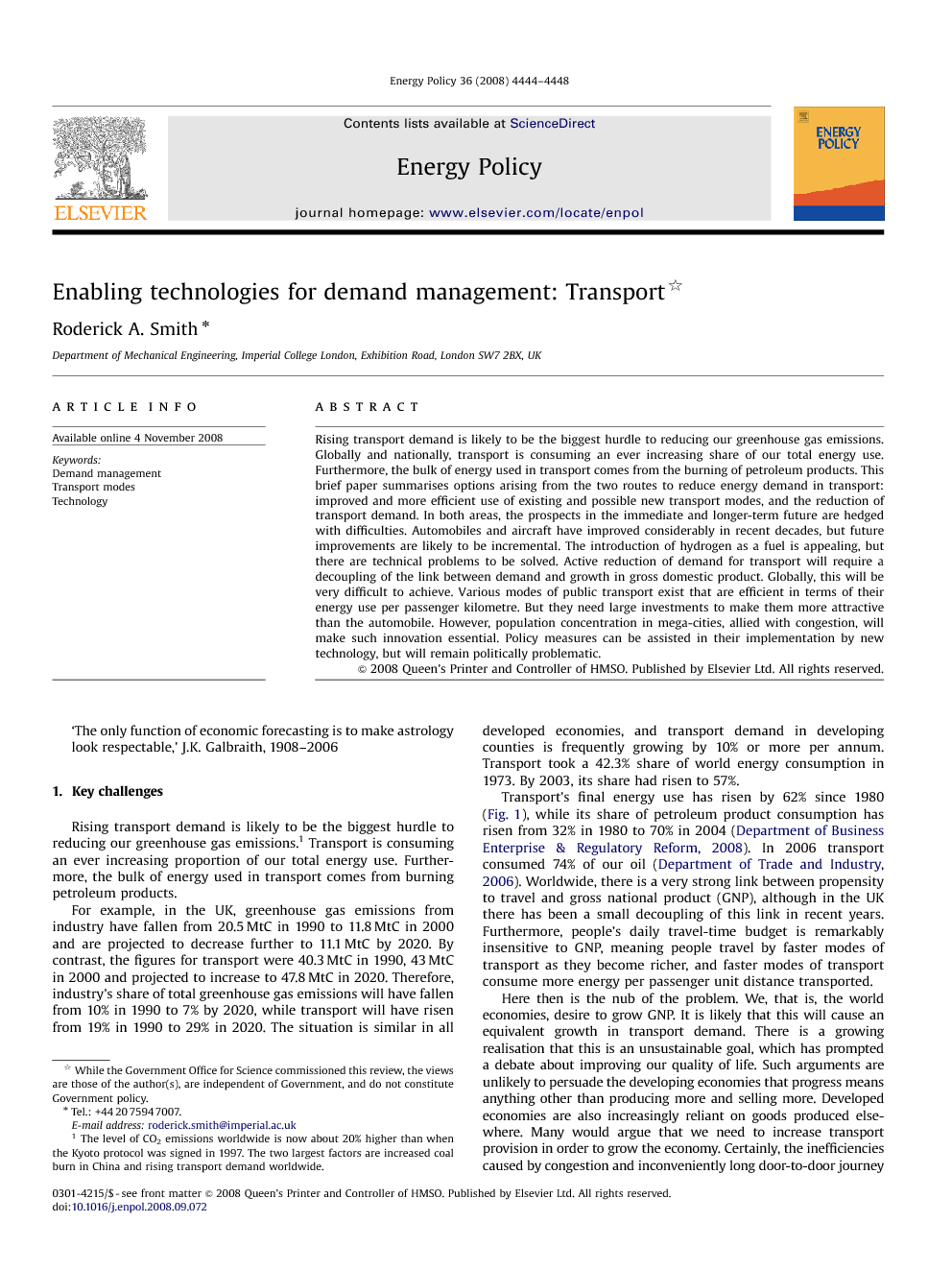 Rising transport demand is likely to be the biggest hurdle to reducing our greenhouse gas emissions. Globally and nationally, transport is consuming an ever increasing share of our total energy use. Furthermore, the bulk of energy used in transport comes from the burning of petroleum products. This brief paper summarises options arising from the two routes to reduce energy demand in transport: improved and more efficient use of existing and possible new transport modes, and the reduction of transport demand. In both areas, the prospects in the immediate and longer-term future are hedged with difficulties. Automobiles and aircraft have improved considerably in recent decades, but future improvements are likely to be incremental. The introduction of hydrogen as a fuel is appealing, but there are technical problems to be solved. Active reduction of demand for transport will require a decoupling of the link between demand and growth in gross domestic product. Globally, this will be very difficult to achieve. Various modes of public transport exist that are efficient in terms of their energy use per passenger kilometre. But they need large investments to make them more attractive than the automobile. However, population concentration in mega-cities, allied with congestion, will make such innovation essential. Policy measures can be assisted in their implementation by new technology, but will remain politically problematic.

Rising transport demand is likely to be the biggest hurdle to reducing our greenhouse gas emissions.1 Transport is consuming an ever increasing proportion of our total energy use. Furthermore, the bulk of energy used in transport comes from burning petroleum products. For example, in the UK, greenhouse gas emissions from industry have fallen from 20.5 MtC in 1990 to 11.8 MtC in 2000 and are projected to decrease further to 11.1 MtC by 2020. By contrast, the figures for transport were 40.3 MtC in 1990, 43 MtC in 2000 and projected to increase to 47.8 MtC in 2020. Therefore, industry's share of total greenhouse gas emissions will have fallen from 10% in 1990 to 7% by 2020, while transport will have risen from 19% in 1990 to 29% in 2020. The situation is similar in all developed economies, and transport demand in developing counties is frequently growing by 10% or more per annum. Transport took a 42.3% share of world energy consumption in 1973. By 2003, its share had risen to 57%. Transport's final energy use has risen by 62% since 1980 (Fig. 1), while its share of petroleum product consumption has risen from 32% in 1980 to 70% in 2004 (Department of Business Enterprise & Regulatory Reform, 2008). In 2006 transport consumed 74% of our oil (Department of Trade and Industry, 2006). Worldwide, there is a very strong link between propensity to travel and gross national product (GNP), although in the UK there has been a small decoupling of this link in recent years. Furthermore, people's daily travel-time budget is remarkably insensitive to GNP, meaning people travel by faster modes of transport as they become richer, and faster modes of transport consume more energy per passenger unit distance transported. Here then is the nub of the problem. We, that is, the world economies, desire to grow GNP. It is likely that this will cause an equivalent growth in transport demand. There is a growing realisation that this is an unsustainable goal, which has prompted a debate about improving our quality of life. Such arguments are unlikely to persuade the developing economies that progress means anything other than producing more and selling more. Developed economies are also increasingly reliant on goods produced elsewhere. Many would argue that we need to increase transport provision in order to grow the economy. Certainly, the inefficiencies caused by congestion and inconveniently long door-to-door journey times cannot be assisting economic growth. Can we reduce transport demand or, failing this, can we use technology to reduce or contain the growth of emissions arising from transport? The past 50 years have seen relatively small changes in our domestic transport scene. The rise of the automobile has seen a significant switch from public transport modes. Use of the train has remained constant and, because of rising overall demand, its mode share has fallen. Motorways have made long-distance journeys much quicker, so overall journey times match or beat rail journeys. Although motorways are only 1% of road length, they carry 19% of the total traffic.2 Transport into and within large cities, particularly London, depends strongly on rail. The most significant rise has been the use of aircraft for both domestic and international travel. The jet engine has served to ‘democratise’ air travel; fares have significantly reduced in real terms. New technologies have not been commercially successful—e.g. Concorde, the hovercraft—and have had little significance. The development of high-speed trains for journeys up to about 4 h has been significant in many other countries. The role of technology has largely been to reduce costs and therefore to stimulate demand. Congestion is becoming a major obstacle to economic growth, with current losses estimated to be in the order of £20 billion a year. Because cars are stationary for approximately 96% of their life, they are singularly inefficient as transport machines. Parking is a major problem, which suggests that schemes for vehicle sharing should be pursued with vigour. These issues are shared by most developed countries. The sharp rise in automobile traffic in developing economies gives cause for concern if global emissions are to be contained. Transport's central role in the economy and its pervasive influence on daily life make rapid changes in this sector difficult to achieve. Its relatively weak sensitivity to energy price movements and the long time constants associated with infrastructure change make it difficult for governments to implement measures to improve sustainability. Some possible measures include: • improving vehicle and systems energy efficiency, • increasing the use of renewable and other low-carbon energy sources and expanding world access to cleaner and more efficient transport technologies, coupled with a more rapid development and deployment of advanced technologies, • developing politically acceptable, but aggressive, policies to shift the direction of transport to a more sustainable path.

Looking further forward to the 2050 horizon, one is tempted to say ‘your guess is as good as mine’. It is also worth bearing in mind the quotation which introduced this paper. The past 50 years have not produced radically different modes of transport, and no significant new possibilities are available to tantalise us. It is probable that the hydrogen economy will have been sufficiently developed to make a significant contribution to overall energy demand. We are told that fusion will be developed practically, but its role will be electricity production, which will only feed into transport through the hydrogen production route, battery storage for cars and electrification of trains. It is possible that developments of carbon capture and storage will reduce CO2 emissions, but this will only be useful for vehicles through electricity use in various forms. The most worrying sector is that of aircraft where no significant breakthroughs are evidencing themselves and demand is rising quickly.6 Although the link between transport demand and gross domestic product may weaken somewhat in developed economies, in the developing economies where demand is growing fastest this is unlikely. Perhaps a major possibility is to make cars more like trains. A major part of the energy saving of trains, and to a large part, their superior safety, stems from the convoy principle. Development in electronics and telematics mean that the electronic coupling of cars is a distinct possibility. This could, in one go, enhance both speed and capacity on major highways, improve safety and reduce fuel use through the maintenance of constant speeds. Much greater efforts than are currently being made in this area may well reap large rewards. The Energy Review (Department of Trade and Industry, 2006) suggests that Although emissions form this (the transport) sector have increased since 1990, growth in emissions is slowing down, and is not expected to grow as strongly in the future. Emissions from transport are projected to reach a peak around 2015 and thereafter fall. This is on the basis of projections that growth in demand for transport moderates, fuel efficiency in transport continues to improve and lower-carbon fuels, especially biofuels, increase in their market share. This appears to be a very optimistic view. While in the UK, it may conceivably prove to be true, it is not apparent that the new technologies needed or the changes in our past habits will be forthcoming. Globally, our efforts will be swamped with increasing transport demand. Perhaps the biggest challenge will be the need to influence, inform and change social attitudes.