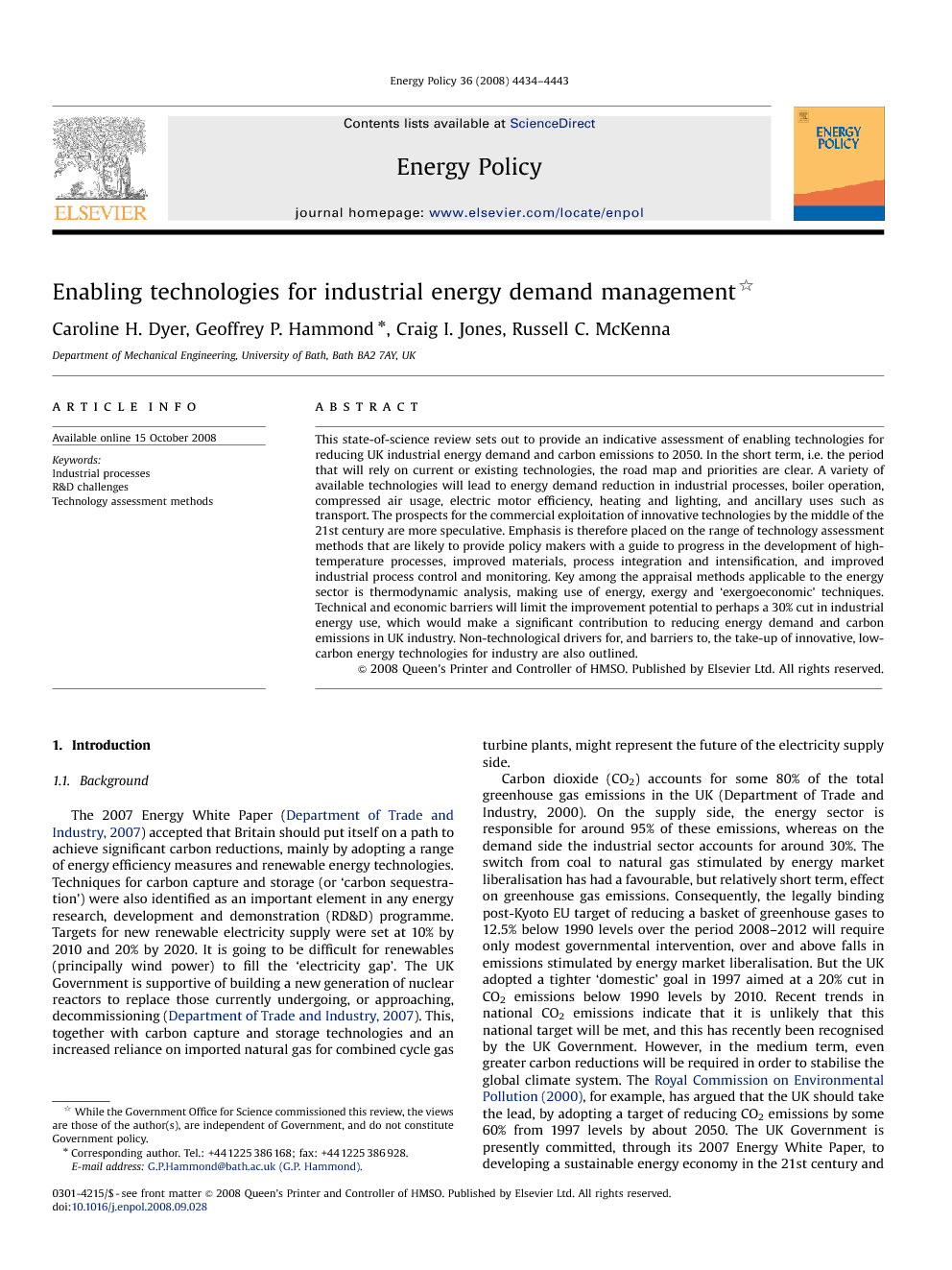 This state-of-science review sets out to provide an indicative assessment of enabling technologies for reducing UK industrial energy demand and carbon emissions to 2050. In the short term, i.e. the period that will rely on current or existing technologies, the road map and priorities are clear. A variety of available technologies will lead to energy demand reduction in industrial processes, boiler operation, compressed air usage, electric motor efficiency, heating and lighting, and ancillary uses such as transport. The prospects for the commercial exploitation of innovative technologies by the middle of the 21st century are more speculative. Emphasis is therefore placed on the range of technology assessment methods that are likely to provide policy makers with a guide to progress in the development of high-temperature processes, improved materials, process integration and intensification, and improved industrial process control and monitoring. Key among the appraisal methods applicable to the energy sector is thermodynamic analysis, making use of energy, exergy and ‘exergoeconomic’ techniques. Technical and economic barriers will limit the improvement potential to perhaps a 30% cut in industrial energy use, which would make a significant contribution to reducing energy demand and carbon emissions in UK industry. Non-technological drivers for, and barriers to, the take-up of innovative, low-carbon energy technologies for industry are also outlined.

The only way the 2050 Royal Commission on Environmental Pollution carbon reduction target—60% from 1997 levels by about 2050—could actually be achieved is by significantly reducing primary energy consumption to 45–75% of the present figure. This requires the widespread adoption of energy-saving measures across the economy, and that has been acknowledged in the 2007 Energy White Paper (Department of Trade and Industry, 2007). This state-of-science review has set out to provide an indicative assessment of enabling technologies for reducing UK industrial energy demand and carbon emissions out to 2050. In the short term, in the period that will rely on the adoption of current or existing technologies, the road map and priorities are relatively clear. Here, there is a variety of available technologies that will lead to a reduction in the demand for energy in industrial processes, boiler operation, compressed-air usage, electric-motor efficiency, the effectiveness of heating and lighting systems and other ancillary uses (such as transport). But the prospects for the commercial exploitation of innovative technologies by the middle of the 21st century are highly speculative. Emphasis is therefore placed on the range of technology assessment methods that are likely to provide policy makers with a guide to progress in the development of high-temperature processes, improved materials, process intensification and improved industrial process control and monitoring. It is in these areas that thermodynamic analysis can make a major contribution to identifying where the improvement potential lies. For example, exergy analysis can provide an indication of the maximum improvement potential available from different enabling technologies. However, it is important to recognise that this ‘maximum’—perhaps an 80% improvement in end-use efficiency in some cases—cannot be achieved in practice. Technical and economic barriers will limit the improvement potential to something closer to 30%. Even that would make a significant contribution to energy demand and carbon reduction in UK industry. Recent trends in energy prices, specifically those of natural gas, and the implementation of national and European legislation have resulted in stronger drivers for industrial energy demand management technology. Innovation in ZLC technologies can secure both economic and environmental objectives. However, there still exist many barriers to the uptake of this technology, the most significant of which appears to be ‘ignorance, inertia and lack of interest’ (Carbon Trust, 2005). There is often poor awareness of baseline energy consumption, the specific ZLC technologies that are available and of the associated economics. Industry needs to be made aware of the portfolio of technology options that are likely to come on stream in the period to 2050. The Carbon Trust (2005) has argued for private and public support for such innovations (like those outlined in 3.2 and 4.2) in order to ‘move them down the cost curve to make them competitive’. Greater awareness of the importance of appraisal methods for industrial energy technologies (particularly the thermodynamic methods outlined in Section 2.2) needs to be encouraged in both the public and private sectors. The Research Councils, the Carbon Trust and the trade associations may have a crucial role to play here. Various policy instruments will inevitably be required to encourage the introduction of energy efficiency measures in the face of market barriers. The two main candidates for intervention are economic instruments (carbon and/or energy taxes, and traded permits) and utility regulation in the wider interests of environmental protection. The Royal Commission on Environmental Pollution (2000) and others favour replacing the present Climate Change Levy with a general carbon tax based on CO2 emitted per unit energy supplied. This should be applied upstream, where fossil fuels are first purchased, and cover all sectors. The Royal Commission argued (2000) that carbon tax revenues should then be employed to reduce fuel poverty, invest in energy efficiency measures, increase the viability of other low-carbon energy alternatives and to protect UK industrial competitiveness. The 2007 Energy White Paper advocated building and product efficiency standards, CO2 emissions trading, tax incentives, and advice and information, alongside the EU Emissions Trading Scheme.