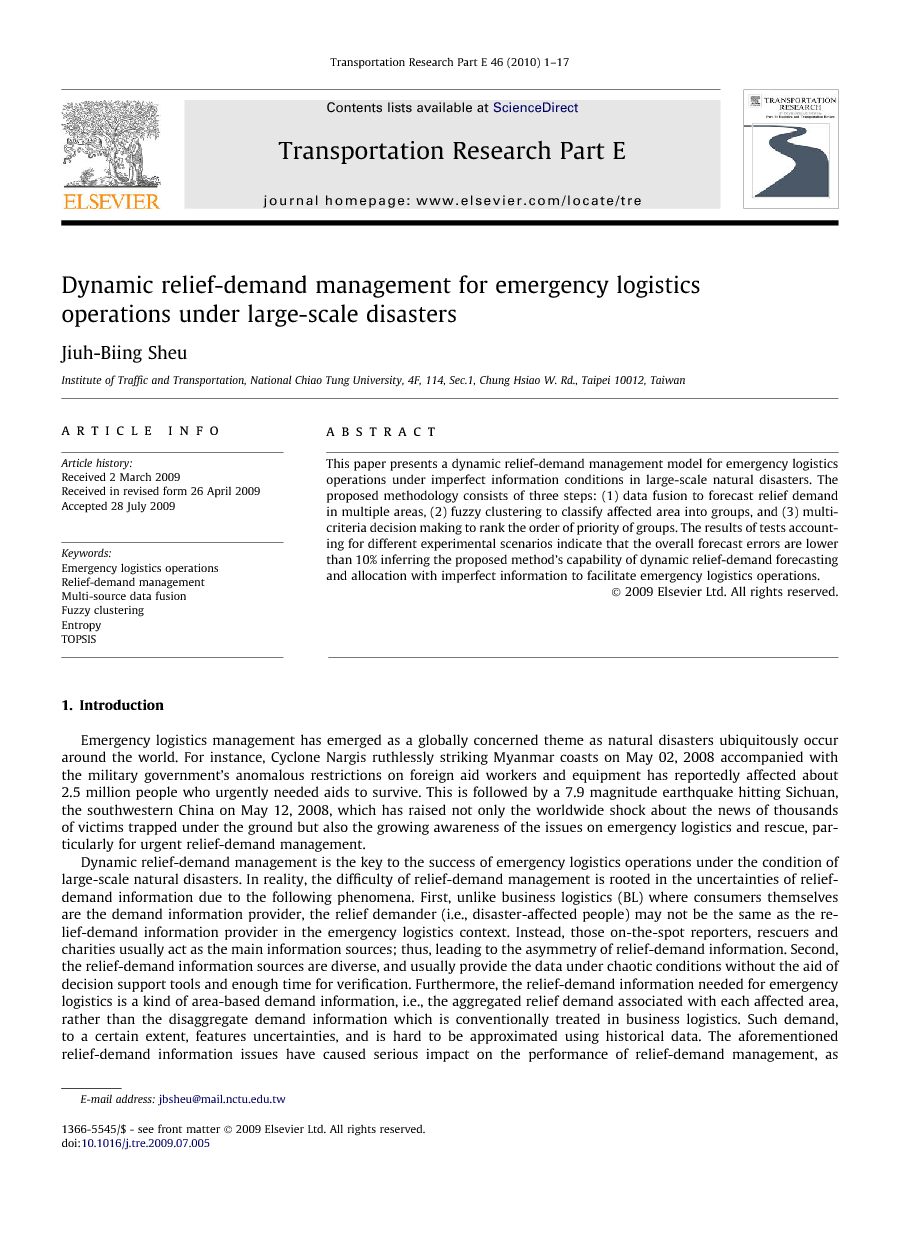 This paper presents a dynamic relief-demand management model for emergency logistics operations under imperfect information conditions in large-scale natural disasters. The proposed methodology consists of three steps: (1) data fusion to forecast relief demand in multiple areas, (2) fuzzy clustering to classify affected area into groups, and (3) multi-criteria decision making to rank the order of priority of groups. The results of tests accounting for different experimental scenarios indicate that the overall forecast errors are lower than 10% inferring the proposed method’s capability of dynamic relief-demand forecasting and allocation with imperfect information to facilitate emergency logistics operations.

This paper has presented a relief-demand management model for dynamically responding to the relief demands of affected people under emergency conditions of a large-scale disaster. The proposed model involves three major mechanisms: (1) dynamic relief-demand forecasting, (2) affected-area grouping, and (3) determination of relief-demand urgency. The methodologies used in this study include multi-source data fusion, fuzzy clustering and TOPSIS. Based on the accumulated number of fatalities approximated through multi-source data fusion techniques, the time-varying relief demand associated with each given affected area is forecasted, followed by the use of a fuzzy clustering-based approach to group these affected areas, and then the identification of group-based relief-demand urgency by TOPSIS. This study has conducted a numerical study with a real large-scale earthquake disaster to illustrate the applicability of the proposed method. Furthermore, eight scenarios represented by the different conditions of fatality-related information acquisition are designed to test the model’s capability of dealing with the uncertainties of collected data as usually encountered in disasters. The test results have revealed that the overall performance of the model is satisfactory by comparing the forecasted results with historical database. The contribution of the paper to the emergency logistics literature (Chiu and Zheng, 2007, Sheu, 2007, Tzeng et al., 2007 and Yi and Kumar, 2007) is that the proposed model permits not only approximating relief demands in real time under information uncertainty and disorder conditions but also dynamically allocating relief demands based on the identified relief-demand urgency degrees associated with affected areas. Such dynamic relief-demand management mechanisms are rarely found in the previous literature. Nevertheless, there is still a great potential for improving the performance of relief-demand management. First, it is noteworthy that the proposed model is used for relief-demand management, which serves as a decision support tool for emergency logistics operations, where the government is the real decision maker of the proposed model. Nevertheless, it is possible to share the forecasted relief-demand information with the local charity and non-governmental organizations for relief supply chain coordination, which may warrant more research effort. Furthermore, more advanced technologies can be incorporated into the framework to improve the system performance in not only relief-demand forecasting but also affected-area grouping and priority identification. The methodological integration with dynamic relief supply and resource allocation mechanisms is also worth investigating. Such model extension is particularly important to carry out the ultimate goals of emergency logistics management. Finally, we expect that the proposed dynamic relief-demand management approach can make benefits available not only for improving the performance of relief-demand management, but also for clarifying the urgent need of more research effort in emergency logistics management and related areas toward the ultimate goal of “maximizing the value of lives” saved under disasters.