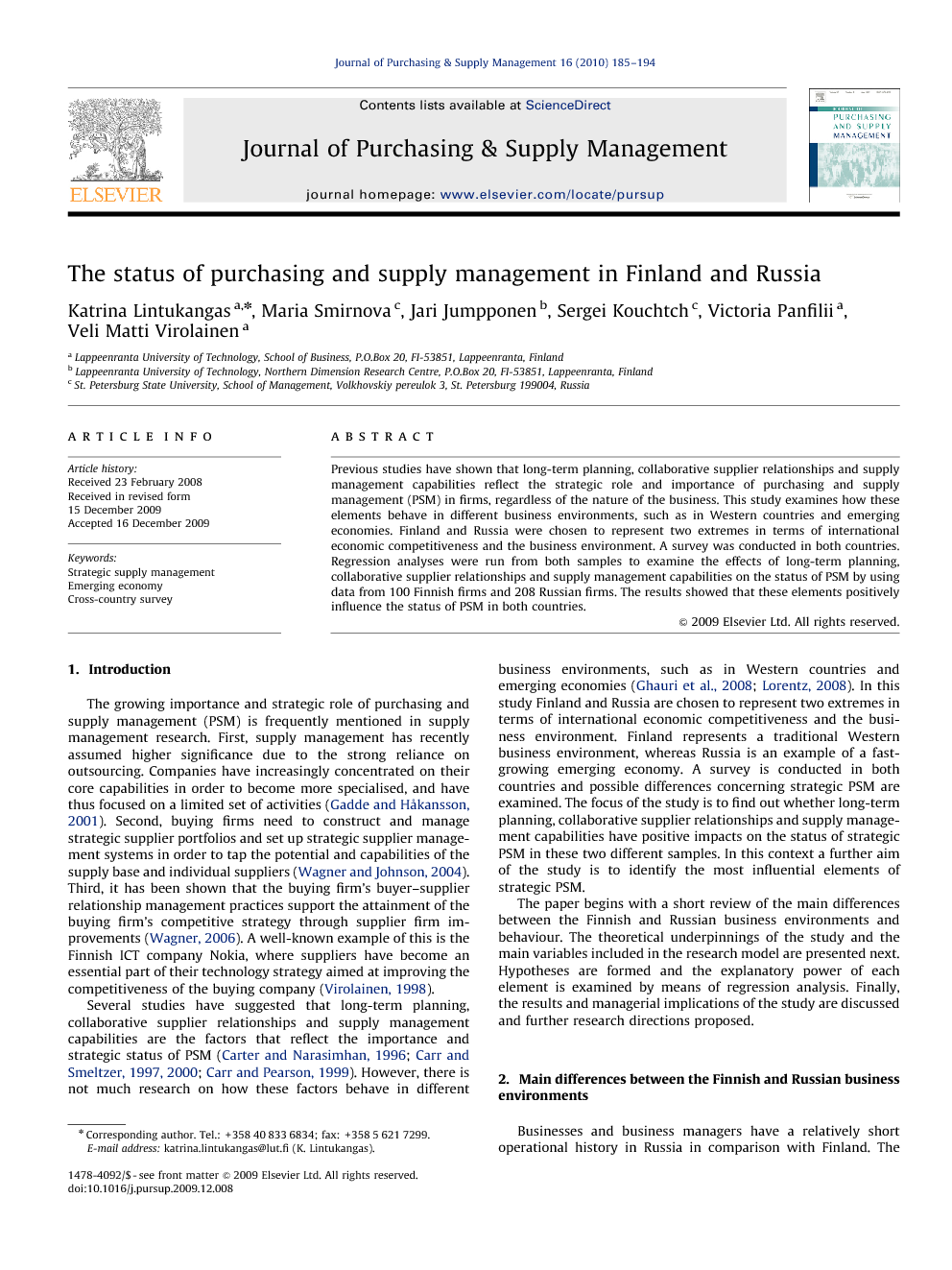 Previous studies have shown that long-term planning, collaborative supplier relationships and supply management capabilities reflect the strategic role and importance of purchasing and supply management (PSM) in firms, regardless of the nature of the business. This study examines how these elements behave in different business environments, such as in Western countries and emerging economies. Finland and Russia were chosen to represent two extremes in terms of international economic competitiveness and the business environment. A survey was conducted in both countries. Regression analyses were run from both samples to examine the effects of long-term planning, collaborative supplier relationships and supply management capabilities on the status of PSM by using data from 100 Finnish firms and 208 Russian firms. The results showed that these elements positively influence the status of PSM in both countries.

The growing importance and strategic role of purchasing and supply management (PSM) is frequently mentioned in supply management research. First, supply management has recently assumed higher significance due to the strong reliance on outsourcing. Companies have increasingly concentrated on their core capabilities in order to become more specialised, and have thus focused on a limited set of activities (Gadde and Håkansson, 2001). Second, buying firms need to construct and manage strategic supplier portfolios and set up strategic supplier management systems in order to tap the potential and capabilities of the supply base and individual suppliers (Wagner and Johnson, 2004). Third, it has been shown that the buying firm's buyer–supplier relationship management practices support the attainment of the buying firm's competitive strategy through supplier firm improvements (Wagner, 2006). A well-known example of this is the Finnish ICT company Nokia, where suppliers have become an essential part of their technology strategy aimed at improving the competitiveness of the buying company (Virolainen, 1998). Several studies have suggested that long-term planning, collaborative supplier relationships and supply management capabilities are the factors that reflect the importance and strategic status of PSM (Carter and Narasimhan, 1996; Carr and Smeltzer, 1997 and Carr and Smeltzer, 2000; Carr and Pearson, 1999). However, there is not much research on how these factors behave in different business environments, such as in Western countries and emerging economies (Ghauri et al., 2008; Lorentz, 2008). In this study Finland and Russia are chosen to represent two extremes in terms of international economic competitiveness and the business environment. Finland represents a traditional Western business environment, whereas Russia is an example of a fast-growing emerging economy. A survey is conducted in both countries and possible differences concerning strategic PSM are examined. The focus of the study is to find out whether long-term planning, collaborative supplier relationships and supply management capabilities have positive impacts on the status of strategic PSM in these two different samples. In this context a further aim of the study is to identify the most influential elements of strategic PSM. The paper begins with a short review of the main differences between the Finnish and Russian business environments and behaviour. The theoretical underpinnings of the study and the main variables included in the research model are presented next. Hypotheses are formed and the explanatory power of each element is examined by means of regression analysis. Finally, the results and managerial implications of the study are discussed and further research directions proposed.