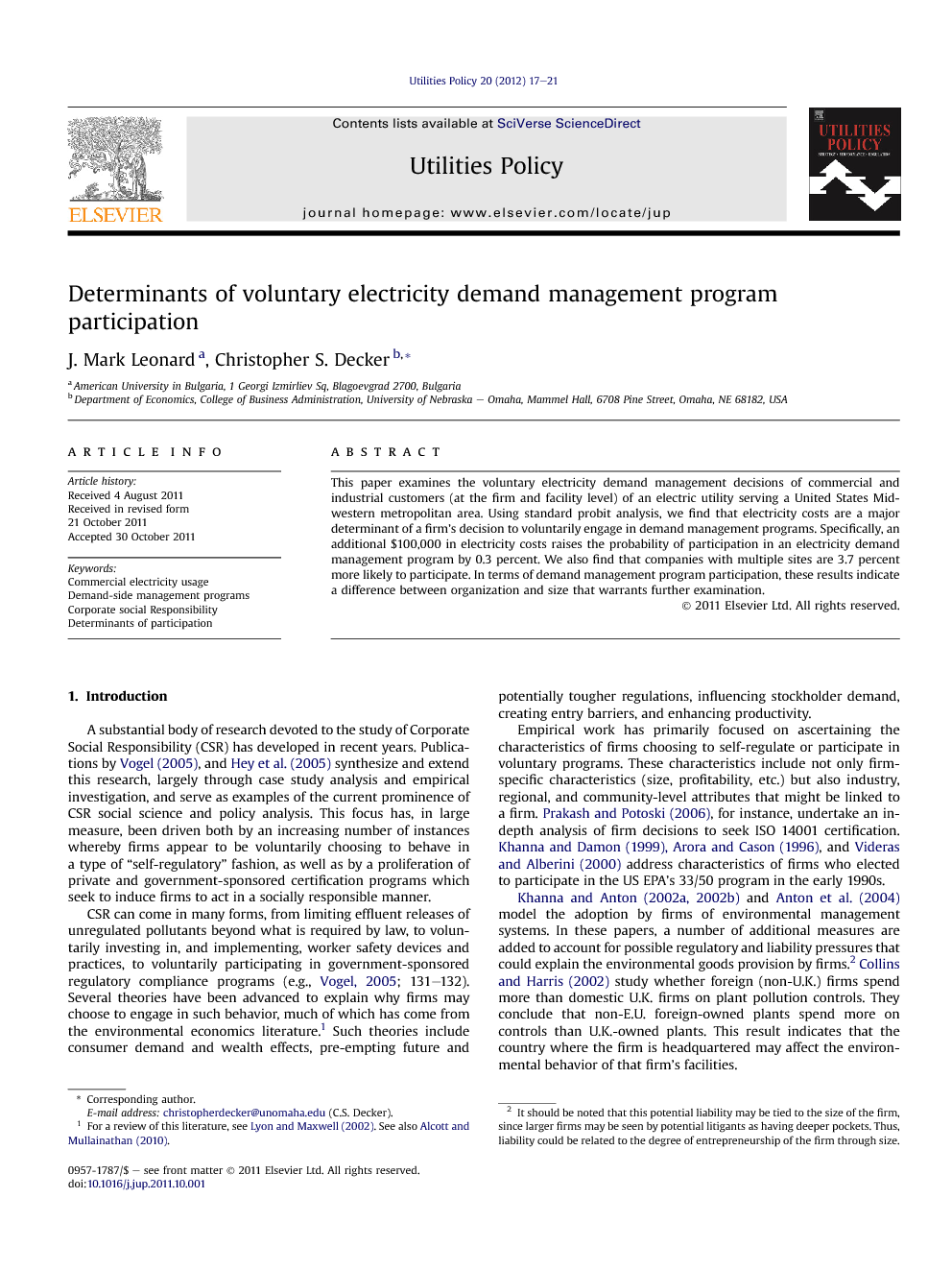 A substantial body of research devoted to the study of Corporate Social Responsibility (CSR) has developed in recent years. Publications by Vogel (2005), and Hey et al. (2005) synthesize and extend this research, largely through case study analysis and empirical investigation, and serve as examples of the current prominence of CSR social science and policy analysis. This focus has, in large measure, been driven both by an increasing number of instances whereby firms appear to be voluntarily choosing to behave in a type of “self-regulatory” fashion, as well as by a proliferation of private and government-sponsored certification programs which seek to induce firms to act in a socially responsible manner. CSR can come in many forms, from limiting effluent releases of unregulated pollutants beyond what is required by law, to voluntarily investing in, and implementing, worker safety devices and practices, to voluntarily participating in government-sponsored regulatory compliance programs (e.g., Vogel, 2005; 131–132). Several theories have been advanced to explain why firms may choose to engage in such behavior, much of which has come from the environmental economics literature.1 Such theories include consumer demand and wealth effects, pre-empting future and potentially tougher regulations, influencing stockholder demand, creating entry barriers, and enhancing productivity. Empirical work has primarily focused on ascertaining the characteristics of firms choosing to self-regulate or participate in voluntary programs. These characteristics include not only firm-specific characteristics (size, profitability, etc.) but also industry, regional, and community-level attributes that might be linked to a firm. Prakash and Potoski (2006), for instance, undertake an in-depth analysis of firm decisions to seek ISO 14001 certification. Khanna and Damon, 1999 and Arora and Cason, 1996, and Videras and Alberini (2000) address characteristics of firms who elected to participate in the US EPA’s 33/50 program in the early 1990s. Khanna and Anton, 2002a and Khanna and Anton, 2002b and Anton et al. (2004) model the adoption by firms of environmental management systems. In these papers, a number of additional measures are added to account for possible regulatory and liability pressures that could explain the environmental goods provision by firms.2Collins and Harris (2002) study whether foreign (non-U.K.) firms spend more than domestic U.K. firms on plant pollution controls. They conclude that non-E.U. foreign-owned plants spend more on controls than U.K.-owned plants. This result indicates that the country where the firm is headquartered may affect the environmental behavior of that firm’s facilities. Peters and Turner (2004) study the participation of small- and medium-sized enterprises (SMEs) in voluntary environmental initiatives and find that SMEs need better demonstration of potential benefits from participation in order to participate in these programs. In some respects, this need would indicate the opposite result – entrepreneurs are less likely to behave in an environmentally positive manner than more established firms. The relationship between firm size and voluntary environmental behavior remains unsettled. While the economics literature is replete with research focusing on pollution control, very little work has focused on voluntary programs geared toward energy conservation. Moreover, no study accounts for facility-specific differences or for differences in interaction between firms and their facilities as potential determinants of voluntary behavior with respect to electricity demand or energy conservation. We examine commercial and industrial customers’ (at the firm and facility level) willingness to voluntarily participate in various demand management programs offered by an electric utility serving a Midwestern metropolitan area in the United States. Electricity demand management will continue to be an important consideration of electric utilities for two reasons: the pressure to reduce carbon emissions and increasing demand on aging power generation facilities. Demand-side management programs (DSM programs) have been a component of this utility’s efforts to assist firms in reducing their electricity use. DSM programs are typically voluntary programs that use a variety of incentives to encourage energy conservation by both residential and commercial utility customers. Notable examples of DSM programs include the U.S. EPA’s Green Lights and Energy Star programs, which provide utilities with incentives to encourage customers to reduce electricity use through improved lighting or to adopt other energy efficient technologies. In many instances, DSM programs are also delivered directly through electric utilities. For example, Florida Power and Light offers a “Solar Rebate Program” to both residential and commercial customers who install photovoltaic (PV) and solar water heating systems in an effort to reduce electricity demand from the utility. We examine data on electricity usage, firm and community characteristics, and DSM program attributes to determine the components of business participation in these programs. Research on these programs for the energy industry has been as varied as the economics research on pollution control. However, this research has focused on the results of individual programs rather than on the effects of particular characteristics (e.g., Sullivan, 2009a and Sullivan, 2009a). Our research differs from industry-level research because it examines the marginal effects of particular firm characteristics on program participation. Examining the marginal effects of specific firm characteristics improves understanding of participation across programs, as opposed to explaining participation of a particular program, and improves electric utilities’ effectiveness at targeting DSM programs to specific characteristics of firms and the overall design of DSM programs. This type of research has been advocated in the utilities research by Farnsworth (2007), but has yet to be seen in academic research. The paper is organized as follows. In Section 2, we develop a conceptual framework to support our empirical specifications. In Section 3, we discuss the data used in this study. In Section 4, we discuss the results and in Section 5, we conclude.

In this paper, we examined the electricity demand management decisions made by the commercial and industrial customers of an electric utility serving a metropolitan area in the Midwestern United States. We find a number of company characteristics affect the probability a customer will participate in an electricity DSM program. Specifically, we find that, statistically speaking, electricity costs matter to firms when deciding on whether or not to adopt a DSM program. However, the quantitative impact is relatively small. An additional $100,000 in electricity costs raises the probability of participation in an electricity DSM program by a modest 0.3 percent, indicating other variables may be of importance. For instance, we find that, while foreign-owned firms are no more likely to participate in DSM programs than domestically-owned companies, firms that operate in countries outside of the U.S. are more likely to participate in DSM programs. Future research directions are plentiful. For instance, there is a genuine need to explore the popularity of these DSM programs among real estate and financial firms when compared with higher electricity users such as manufacturing firms. Perhaps the relative cost of electricity among real estate and financial firms is quite high when compared to manufacturing, but more data is necessary to determine this. Also, the fact that foreign ownership doesn’t matter but a presence in a foreign country does matter to the DSM participation decision warrants future attention.