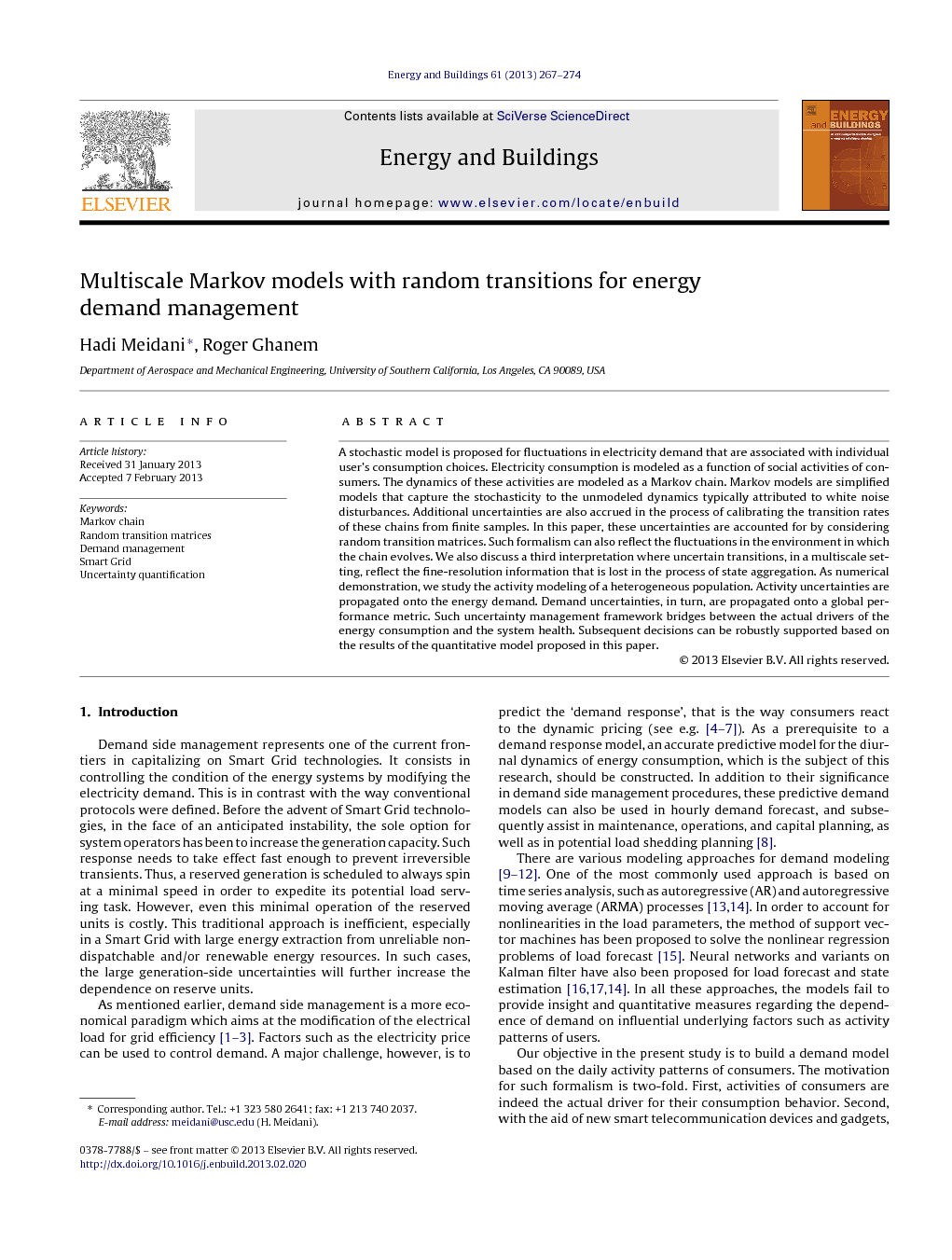 A stochastic model is proposed for fluctuations in electricity demand that are associated with individual user's consumption choices. Electricity consumption is modeled as a function of social activities of consumers. The dynamics of these activities are modeled as a Markov chain. Markov models are simplified models that capture the stochasticity to the unmodeled dynamics typically attributed to white noise disturbances. Additional uncertainties are also accrued in the process of calibrating the transition rates of these chains from finite samples. In this paper, these uncertainties are accounted for by considering random transition matrices. Such formalism can also reflect the fluctuations in the environment in which the chain evolves. We also discuss a third interpretation where uncertain transitions, in a multiscale setting, reflect the fine-resolution information that is lost in the process of state aggregation. As numerical demonstration, we study the activity modeling of a heterogeneous population. Activity uncertainties are propagated onto the energy demand. Demand uncertainties, in turn, are propagated onto a global performance metric. Such uncertainty management framework bridges between the actual drivers of the energy consumption and the system health. Subsequent decisions can be robustly supported based on the results of the quantitative model proposed in this paper.

Demand side management represents one of the current frontiers in capitalizing on Smart Grid technologies. It consists in controlling the condition of the energy systems by modifying the electricity demand. This is in contrast with the way conventional protocols were defined. Before the advent of Smart Grid technologies, in the face of an anticipated instability, the sole option for system operators has been to increase the generation capacity. Such response needs to take effect fast enough to prevent irreversible transients. Thus, a reserved generation is scheduled to always spin at a minimal speed in order to expedite its potential load serving task. However, even this minimal operation of the reserved units is costly. This traditional approach is inefficient, especially in a Smart Grid with large energy extraction from unreliable non-dispatchable and/or renewable energy resources. In such cases, the large generation-side uncertainties will further increase the dependence on reserve units. As mentioned earlier, demand side management is a more economical paradigm which aims at the modification of the electrical load for grid efficiency [1], [2] and [3]. Factors such as the electricity price can be used to control demand. A major challenge, however, is to predict the ‘demand response’, that is the way consumers react to the dynamic pricing (see e.g. [4], [5], [6] and [7]). As a prerequisite to a demand response model, an accurate predictive model for the diurnal dynamics of energy consumption, which is the subject of this research, should be constructed. In addition to their significance in demand side management procedures, these predictive demand models can also be used in hourly demand forecast, and subsequently assist in maintenance, operations, and capital planning, as well as in potential load shedding planning [8]. There are various modeling approaches for demand modeling [9], [10], [11] and [12]. One of the most commonly used approach is based on time series analysis, such as autoregressive (AR) and autoregressive moving average (ARMA) processes [13] and [14]. In order to account for nonlinearities in the load parameters, the method of support vector machines has been proposed to solve the nonlinear regression problems of load forecast [15]. Neural networks and variants on Kalman filter have also been proposed for load forecast and state estimation [16], [17] and [14]. In all these approaches, the models fail to provide insight and quantitative measures regarding the dependence of demand on influential underlying factors such as activity patterns of users. Our objective in the present study is to build a demand model based on the daily activity patterns of consumers. The motivation for such formalism is two-fold. First, activities of consumers are indeed the actual driver for their consumption behavior. Second, with the aid of new smart telecommunication devices and gadgets, the activity patterns of individuals have become increasingly more observable, providing an unprecedented opportunity for validation and update of the demand model in a Smart City. Activity-based energy demand models have been studied in [18], [19], [20] and [21], where the dynamics of the daily activities was modeled by a Markov chain. What distinguishes our model from previous Markovian demand models is the random treatment of the transition matrices. This additional uncertainty in the parameters of the Markov chain is assumed to account for the calibration error due to scarcity of data and/or the loss of information due to upscaling in state space. The inclusion of this uncertainty will provide decision makers with quantified confidence in the predicted quantities of interest (QoI) and therefore assist in the robust management of energy systems. We use a Maximum Entropy probability measure, proposed in [22], to characterize the uncertainty in these matrices. In the present paper, we first describe the Markov chain modeling approach for the social activities of the consumers. This model is extended to include uncertainty in the transition matrices. The theoretical development for such extension leading to a probability measure for transition matrices is described. Associated with this uncertainty will be an uncertainty in predicted demand with implications on predicted system performance. In this paper, we focus on the small-signal stability of the system as the system's performance metric. Technical description of this performance metric is included in Section 3. Finally, we illustrate the application of this model using an actual Time-Use dataset obtained in 2011. In this section, we also illustrate how the uncertain treatment of Markov transition matrices can be used to reflect the information lost in the upscaling of activity states. This section is concluded by the numerical results on the stability analysis of a representative grid given activity-based stochastic demand.

We presented an uncertainty management framework for the study of the stochastic energy demand in a manner that is commensurate with Smart Grid capabilities. Our approach permits a consistent propagation of uncertainties from demand to system-wide stability and associated risk management. It consists of a robust predictive model for electricity demand which exploit the information of daily activities of individuals. A probabilistic formalism was used for the Markov chain describing the dynamics of the activities. This formalism can be used to quantify the uncertainty in the quantities of interest. It was shown that these uncertainties can reflect the error due to insufficient calibration data, or loss of information through upscaling in state space of the chain.