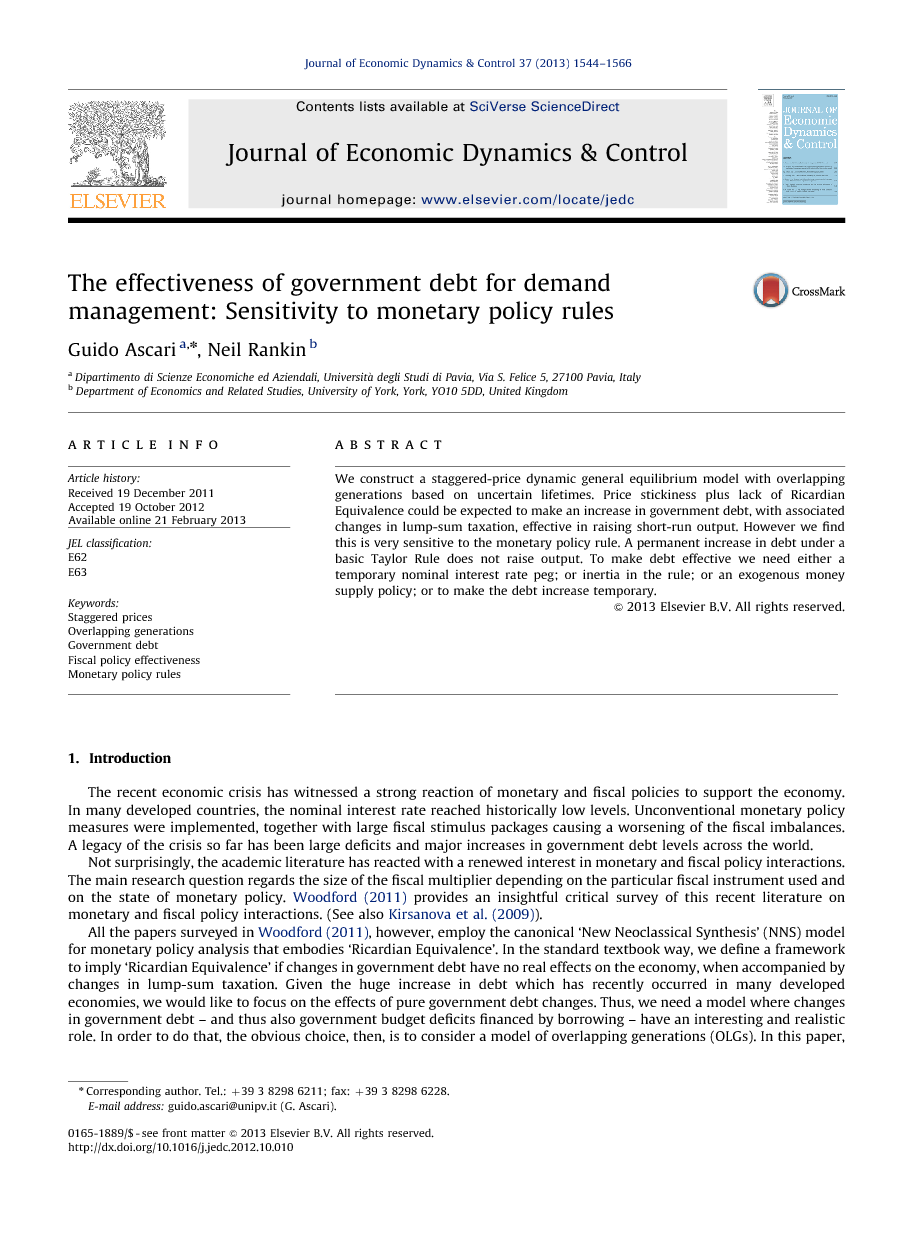 We construct a staggered-price dynamic general equilibrium model with overlapping generations based on uncertain lifetimes. Price stickiness plus lack of Ricardian Equivalence could be expected to make an increase in government debt, with associated changes in lump-sum taxation, effective in raising short-run output. However we find this is very sensitive to the monetary policy rule. A permanent increase in debt under a basic Taylor Rule does not raise output. To make debt effective we need either a temporary nominal interest rate peg; or inertia in the rule; or an exogenous money supply policy; or to make the debt increase temporary

Our general conclusion is that the effectiveness of government debt for demand management is highly sensitive to the monetary policy rule. The standard way to model monetary policy in recent years has been to assume a Taylor Rule. The most basic type of Taylor Rule, however, completely neutralises the ability of a permanent increase in debt to raise short-run output. Government debt can be used effectively within a Taylor Rule regime, but care needs to be exercised over how this is done: either a temporary peg of the nominal interest rate is needed, or some inertia in the Taylor Rule; alternatively, the increase in debt should be chosen to be temporary rather than permanent. If, on the other hand, the monetary policy rule is to set an exogenous path for the money supply, then a permanent increase in debt will increase short-run output without additional qualifications. These findings are particularly relevant in a period of history such as the recent one. During the ‘credit crunch’ recession of 2008–9, many governments ran large budget deficits and dramatically increased government debt levels in a deliberate attempt to provide ‘fiscal stimulus’ to counteract the recession. Such a concerted attempt to use fiscal policy for demand management had not been seen since the 1970s. Our analysis implies that such policies would have been futile if central banks had not cooperated in keeping nominal interest rates low (at almost zero, in fact) while the fiscal stimulus was in progress. In this paper we have focused on the ‘positive’ rather than the ‘normative’ effects of government debt. Being a DGE model, our model also has implications for the effects of debt on welfare, since the impact on the underlying lifetime utility levels of agents can be investigated. However in an overlapping-generations model it is less straightforward to look at welfare than in a so-called ‘representative agent’ model, because different generations are affected differently by policy. A social welfare function is needed in order to assess optimal policy, and this raises subtle issues which take us beyond our present scope. We therefore leave for future work a careful study of the welfare implications of the use of government debt for demand management.