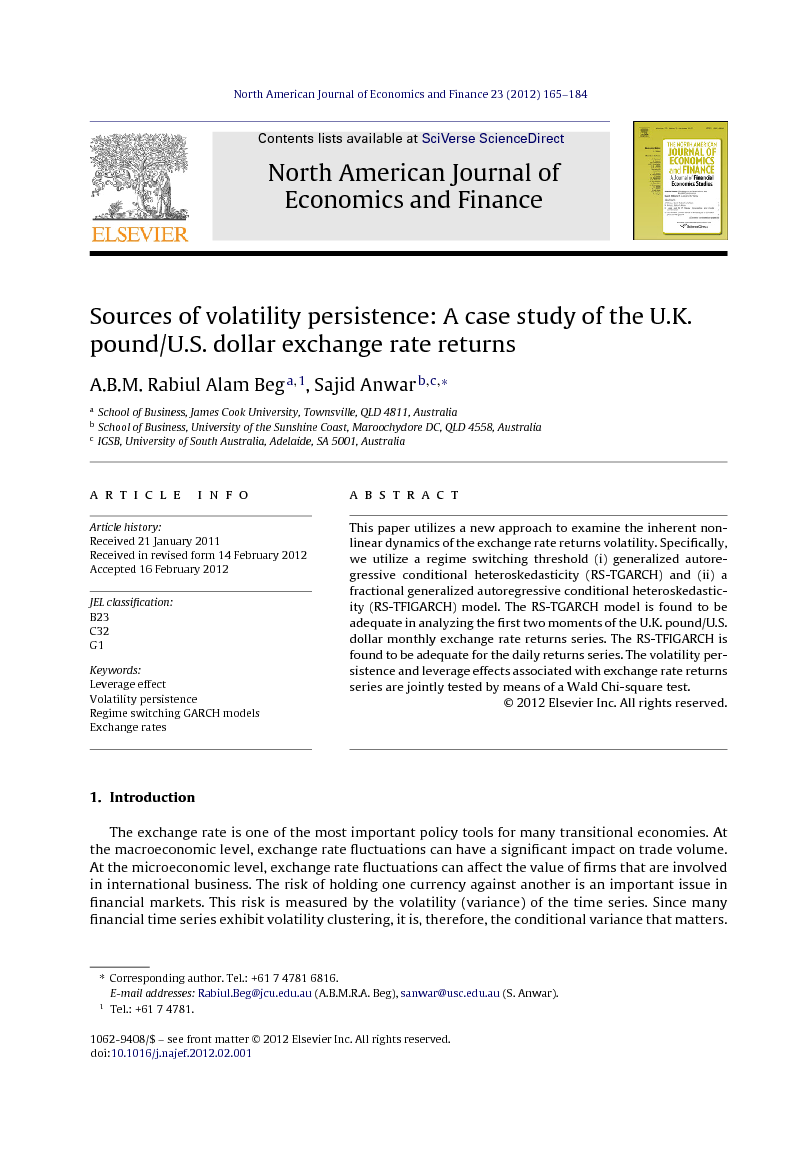 This paper utilizes a new approach to examine the inherent nonlinear dynamics of the exchange rate returns volatility. Specifically, we utilize a regime switching threshold (i) generalized autoregressive conditional heteroskedasticity (RS-TGARCH) and (ii) a fractional generalized autoregressive conditional heteroskedasticity (RS-TFIGARCH) model. The RS-TGARCH model is found to be adequate in analyzing the first two moments of the U.K. pound/U.S. dollar monthly exchange rate returns series. The RS-TFIGARCH is found to be adequate for the daily returns series. The volatility persistence and leverage effects associated with exchange rate returns series are jointly tested by means of a Wald Chi-square test.

The exchange rate is one of the most important policy tools for many transitional economies. At the macroeconomic level, exchange rate fluctuations can have a significant impact on trade volume. At the microeconomic level, exchange rate fluctuations can affect the value of firms that are involved in international business. The risk of holding one currency against another is an important issue in financial markets. This risk is measured by the volatility (variance) of the time series. Since many financial time series exhibit volatility clustering, it is, therefore, the conditional variance that matters. Efficient econometric inference about the conditional mean of a variable, for example the return on an asset, requires correct specification of its conditional variance. Early models of volatility measurement include the work of Engle (1982). Engle developed a class of models known as autoregressive conditional heteroskedasity (ARCH). Bollerslev (1986) extended the ARCH to include past variance in the conditional variance function. This extension is widely known as the GARCH model. These models have gained popularity because they are capable of capturing volatility clustering and can accommodate fat-tailedness of return distribution at the same rate of persistence. ARCH/GARCH models are computationally straightforward. While these models are popular, they are incapable of capturing asymmetric new information. The asymmetric or the so called leverage effect was first highlighted by Black (1976) and subsequently by Christie (1982). The asymmetric effect of return on stocks has been considered by French, Schewert, and Stambaugh (1987), Schwert (1990), Nelson (1991), Engle and Ng (1993) and Glosten, Jagannathan, and Runkel (hereafter GJR, 1993) to name a few. The GJR model allows one to evaluate the effect of the announcement of both good and bad news on volatility. The exponential GARCH (i.e., EGARCH) model of Nelson (1991) also allows for the asymmetric effect of news announcements. This model does not require any non-negativity restrictions on the variance parameters as opposed to GARCH. The GJR model has the advantage that it allows for a more natural interpretation of the size and persistence of shocks on volatility (see, Enders, 2010). In addition, this model also allows one to consider leverage effects. However, it is very hard to use this model for forecasting conditional variance. Verhoeven, Pilgram, McAleer, and Mees (2002) have developed a forecasting method which is based on nonlinear Markov modelling and canonical variate analysis. This method can be used to forecast conditional volatility. Verhoeven et al. have shown that their non-linear model, due to its flexibility, can forecast volatility much better than a GARCH(1,1) model. A semi-parametric GARCH model developed by Yang (2000) produced superior volatility forecasts than GJR and GARCH(1,1) models for the Deutsche Mark/U.S. dollar and Deutsche Mark/British pound daily returns. Caporin and McAleer (2006) generalized the GJR model to include a time dependent asymmetric effect of stock market indices. Another volatility model commonly used to handle leverage effects is the threshold GARCH (or TGARCH). Tsay (2005), using daily data on IBM stock volatility, found that, as compared to GJR model, the asymmetric behavior in the time series was much stronger in TGARCH model. In summary, the existing literature supports that view that regime switching models are capable of capturing the asymmetric effects of stock returns. Motivated by this observation, we develop a model that can trace the sources of asymmetry and persistence of shocks on volatility.2 The main objective of this paper is to estimate the degree of persistence of shocks on volatility due to a shift in the unconditional variance of the process which is not captured by GARCH or TGARCH models.3 We model volatility by means of a regime switching TGARCH (RS-TGARCH) model. A test is proposed to jointly test the effect of the persistence of the shock and leverage effects. The performance of the proposed model is evaluated by means of the British pound/U.S. dollar spot exchange rate series. The currency exchange rates can be viewed as security prices in the foreign exchange market and hence one can examine the asymmetric volatility of exchange rate returns arising from the announcement of bad/good news. Examples of such news include the stock market crash of 1987, the U.S. recession of 1992, the Asian financial crisis of 1997–98 and various government policy changes that affect exchange rate dynamics.4 This paper shows that volatility persistence in the exchange rate returns series is mainly due to pure shocks and not due to regime switching. The rest of this paper is organized as follows. Section 2 contains a description of the data and methodology. Tests for regime-switching, leverage effect and persistence of innovation on volatility are proposed in Section 3. Section 4 contains the empirical results while Section 5 concludes the paper.

Volatility persistence is an important issue in financial risk analysis. In this paper, we argue that traditional GARCH models are incapable of identifying the sources of volatility persistence. We propose and estimate a new volatility regime switching model. The proposed model is empirically evaluated by means of monthly and daily exchange rate returns on the U.K. pound/U.S. dollar exchange rate series. Our main contribution is that we jointly model and test for persistency and asymmetry of volatility. Our empirical analysis shows that the volatility transition mechanism for the daily and monthly data cannot be adequately described by a single model. Our analysis suggests that volatility in the U.K. pound/U.S. dollar exchange rate return series seems to be persistent due to (i) pure shocks and (ii) threshold regime switching. The RS-TGARCH model is found to be suitable for the monthly returns, while the RS-TFIGARCH model is adequate for the daily returns series. The models utilized in this paper can also be applied to other financial time series to uncover the sources of volatility persistence.