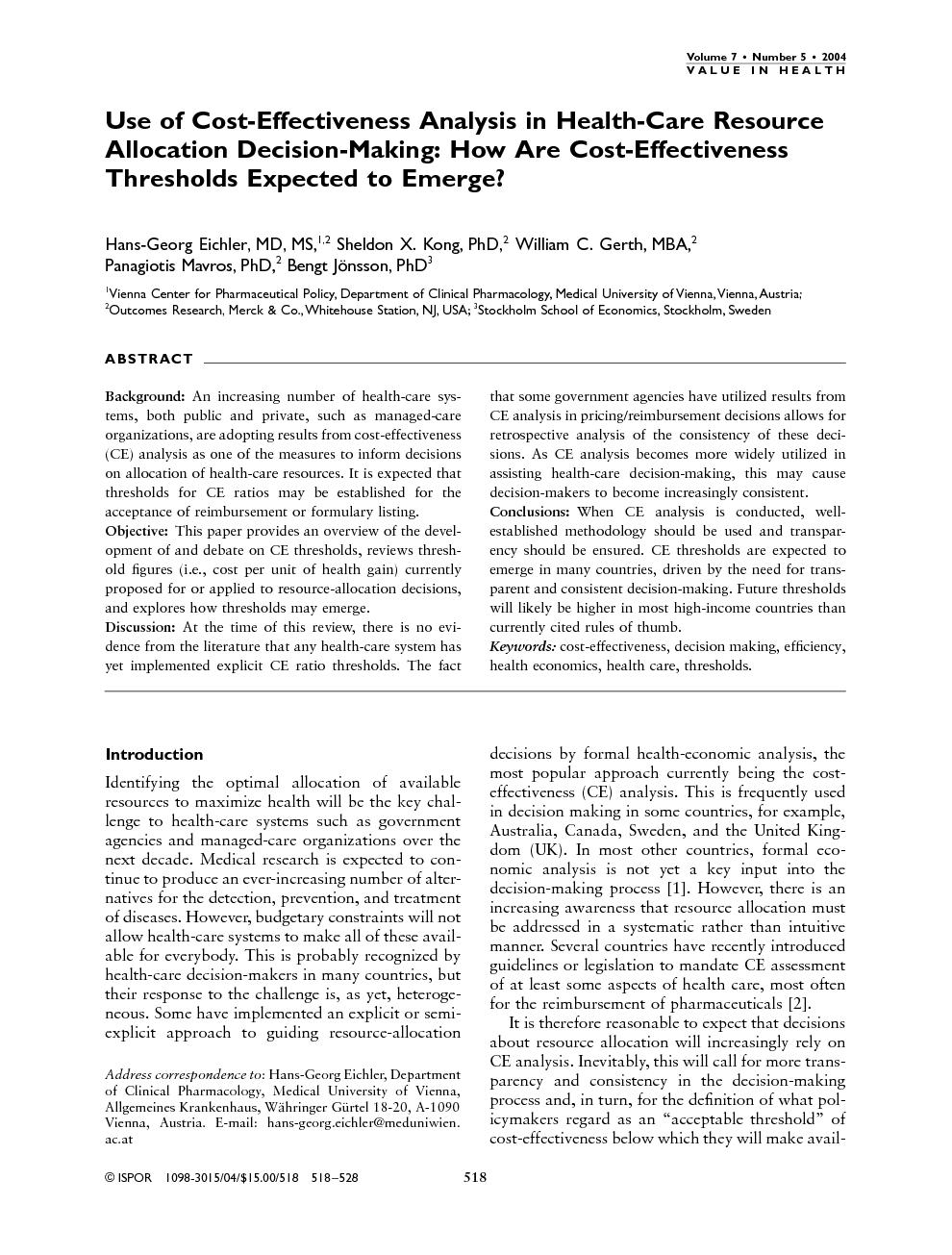 Background An increasing number of health-care systems, both public and private, such as managed-care organizations, are adopting results from cost-effectiveness (CE) analysis as one of the measures to inform decisions on allocation of health-care resources. It is expected that thresholds for CE ratios may be established for the acceptance of reimbursement or formulary listing. Objective This paper provides an overview of the development of and debate on CE thresholds, reviews threshold figures (i.e., cost per unit of health gain) currently proposed for or applied to resource-allocation decisions, and explores how thresholds may emerge. Discussion At the time of this review, there is no evidence from the literature that any health-care system has yet implemented explicit CE ratio thresholds. The fact that some government agencies have utilized results from CE analysis in pricing/reimbursement decisions allows for retrospective analysis of the consistency of these decisions. As CE analysis becomes more widely utilized in assisting health-care decision-making, this may cause decision-makers to become increasingly consistent. Conclusions When CE analysis is conducted, well-established methodology should be used and transparency should be ensured. CE thresholds are expected to emerge in many countries, driven by the need for transparent and consistent decision-making. Future thresholds will likely be higher in most high-income countries than currently cited rules of thumb.

Identifying the optimal allocation of available resources to maximize health will be the key challenge to health-care systems such as government agencies and managed-care organizations over the next decade. Medical research is expected to continue to produce an ever-increasing number of alternatives for the detection, prevention, and treatment of diseases. However, budgetary constraints will not allow health-care systems to make all of these available for everybody. This is probably recognized by health-care decision-makers in many countries, but their response to the challenge is, as yet, heterogeneous. Some have implemented an explicit or semiexplicit approach to guiding resource-allocation decisions by formal health-economic analysis, the most popular approach currently being the costeffectiveness (CE) analysis. This is frequently used in decision making in some countries, for example, Australia, Canada, Sweden, and the United Kingdom (UK). In most other countries, formal economic analysis is not yet a key input into the decision-making process [1]. However, there is an increasing awareness that resource allocation must be addressed in a systematic rather than intuitive manner. Several countries have recently introduced guidelines or legislation to mandate CE assessment of at least some aspects of health care, most often for the reimbursement of pharmaceuticals [2]. It is therefore reasonable to expect that decisions about resource allocation will increasingly rely on CE analysis. Inevitably, this will call for more transparency and consistency in the decision-making process and, in turn, for the definition of what policymakers regard as an “acceptable threshold” of cost-effectiveness below which they will make available a technology and above which they will ration access. It is recognized that a number of issues of cost-effectiveness assessment remain the subject of debate. However, this paper is not concerned with the technical limitations of CE analysis as such. We review the current concept of and debate on thresholds and discuss recent reports indicative of emerging CE thresholds. In the last section, we explore how thresholds are expected to evolve in future.

Explicit rationing is unpopular or actively discouraged [62], but implicit (and sometimes erratic) rationing balances budgets and maintains the system [63]. Over the past decade, an increasing number of health-care policymakers and managers have embraced health economics, and in particular CE analysis, as a tool for making allocation of resources more rational. The performance of such analyses and the appraisal of their results have direct cost, and the implicit costs of delaying accessto potentially beneficial health-care technologies [64]. Hence, conducting or requesting them makes sense only if their results are used in an appropriate way for allocation of scarce resources. While CE analysis may have been intended to be a tool for cost-containment in the first place, this is not its proper use. Such studies may help detect underutilization as well as overutilization of healthcare resources. What health-systems managers also may have overlooked, is the fact that CE analysis opens up to scrutiny their decision-making process, and the consistency of this process. The systematic analyses of the consistency of Australian and UK decision-making bodies [13,20] are but the first examples of things to come. In the face of public scrutiny, and a number of groups with strong economic interests in the allocation of healthcare resources, policymakers will be forced to become increasingly consistent. We cautiously predict that it is only a matter of time before this will move to a situation with explicit threshold values for costeffectiveness. Considerations of cost-effectiveness will likely become only one of several criteria for resource allocation. Hence, the development of soft thresholds with upper and lower boundaries is more likely, and more sensible, than rigid implementation of a single CE criterion. Over the past decades, the quality of clinical evidence has become the primary criterion for accepting and funding of health-care technology. Likewise, well-established methodology and valid and reliable data should be used and transparency should be ensured, when CE analysis is conducted. Moreover, economic efficiency in allocation of resources for health requires that the marginal health gain per $ spent be equal across investments. Hence, all interventions should logically be held up to the same standards of assessment and threshold levels. It has been pointed out that setting separate ceiling targets, e.g., for pharmaceutical expenditure, may not achieve the most efficient use of the overall health-care budget [2], and is difficult to defend. Increased explicitness about health-care rationing is expected to lead to controversy, as rationing decisions are likely to be challenged at the individual- patient level and by interest groups or organizations [15,65]. The welcome consequence of this, for health-care providers and health-systems managers alike, is that health-care funding is also expected to increase as a result of public debate, when the political costs of open rationing become apparent. As a consequence, CE thresholds in most high-income countries may eventually be higher than currently cited rules of thumb. The general public’s preparedness, at least in some countries, to increase resources to health care, even through higher taxation, is supported by preliminary evidence [17,66]. Such debate may also help redress allocation inefficiencies between lifesaving interventions in the health sector and other sectors [12]. We have discussed the substantial differences in costeffectiveness of lifesaving interventions across sectors. Budget allocation decisions for the funded programs may or may not have been based on formal CE analysis, but may also have been driven by political priorities, environmental, or other concerns. Nonetheless, as Tengs et al. [12] pointed out, “this kind of variation is unnerving,” because economic efficiency in promoting survival would also require that the marginal benefit per $ spent be equal across sectors. It appears reasonable to expect that emerging thresholds will not be identical in different countries. The ability to pay for a given intervention varies with income level, even when costs and effectiveness are similar. This problem may also become apparent within the European Union (EU) as membership is extended to countries in Eastern Europe with much lower income levels. Different CE thresholds in the EU may give rise to tension and, perhaps, to the establishment of a healthequalization fund to defuse inter-country equity issues. We hope that our discussion of factors influencing CE thresholds will help to point out more rational routes to arrive at a threshold than by perpetuating old rules of thumb. When discussing thresholds, it is time to say goodbye to the appeal of round numbers.