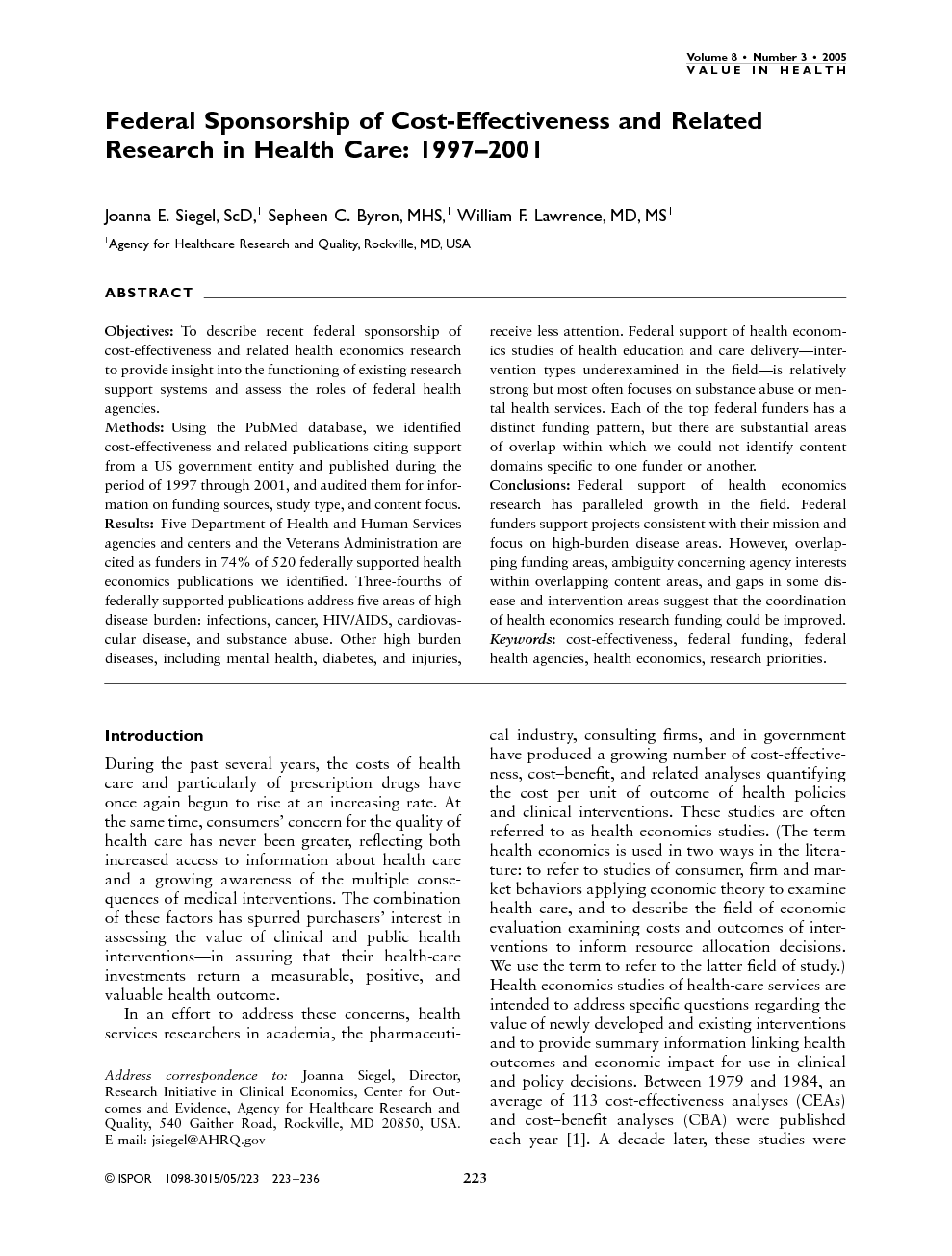 Objectives To describe recent federal sponsorship of cost-effectiveness and related health economics research to provide insight into the functioning of existing research support systems and assess the roles of federal health agencies. Methods Using the PubMed database, we identified cost-effectiveness and related publications citing support from a US government entity and published during the period of 1997 through 2001, and audited them for information on funding sources, study type, and content focus. Results Five Department of Health and Human Services agencies and centers and the Veterans Administration are cited as funders in 74% of 520 federally supported health economics publications we identified. Three-fourths of federally supported publications address five areas of high disease burden: infections, cancer, HIV/AIDS, cardiovascular disease, and substance abuse. Other high burden diseases, including mental health, diabetes, and injuries, receive less attention. Federal support of health economics studies of health education and care delivery—intervention types underexamined in the field—is relatively strong but most often focuses on substance abuse or mental health services. Each of the top federal funders has a distinct  funding  pattern,  but  there  are  substantial  areas  of overlap within which we could not identify content domains specific to one funder or another. Conclusions Federal support of health economics research has paralleled growth in the field. Federal funders support projects consistent with their mission and focus on high-burden disease areas. However, overlapping funding areas, ambiguity concerning agency interests within overlapping content areas, and gaps in some disease and intervention areas suggest that the coordination of health economics research funding could be improved.

During the past several years, the costs of health care and particularly of prescription drugs have once again begun to rise at an increasing rate. At the same time, consumers’ concern for the quality of health care has never been greater, reflecting both increased access to information about health care and a growing awareness of the multiple consequences of medical interventions. The combination of these factors has spurred purchasers’ interest in assessing the value of clinical and public health interventions—in assuring that their health-care investments return a measurable, positive, and valuable health outcome. In an effort to address these concerns, health services researchers in academia, the pharmaceutical industry, consulting firms, and in government have produced a growing number of cost-effectiveness, cost–benefit, and related analyses quantifying the cost per unit of outcome of health policies and clinical interventions. These studies are often referred to as health economics studies. (The term health economics is used in two ways in the literature: to refer to studies of consumer, firm and market behaviors applying economic theory to examine health care, and to describe the field of economic evaluation examining costs and outcomes of interventions to inform resource allocation decisions. We use the term to refer to the latter field of study.) Health economics studies of health-care services are intended to address specific questions regarding the value of newly developed and existing interventions and to provide summary information linking health outcomes and economic impact for use in clinical and policy decisions. Between 1979 and 1984, an average of 113 cost-effectiveness analyses (CEAs) and cost–benefit analyses (CBA) were published each year [1]. A decade later, these studies werebeing published about three times that rate [2], with growth occurring across medical modalities and in the United States, as well as internationally. Although its role in using and promoting health economic considerations in health-care decision making has been fraught with controversy [3], the federal government has been a significant funder of health economics studies for nearly two decades. Although health economics is often listed among agency research interests, most federal efforts in this area have been opportunistic. Funders, by and large, have offered only general guidance as to their interests and priorities for applied health economics research or methods. With few exceptions, health economics studies have been supported within research portfolios addressing broad substantive areas. This has led to some confusion among health-care researchers about agency interests and about where to seek funding for a given study. It is also unclear whether federal funders are addressing important topics and supporting a coherent and cohesive base of health economics information. This report reviews the recent federal sponsorship of health economics research focusing on health-care services to provide insight into the functioning of the research support systems that are currently in place. We examine whether the output of federally sponsored studies is keeping pace with the increased level of interest in health economics, the substantive focus of this research, and the specific roles of the federal agencies.

Recent growth in the field of health economics is reflected in an increasing number of health economics publications supported by the federal government. Dozens of agencies and institutes throughout the federal government contribute to health economics research. The most frequently cited supporters of this research, however, are several agencies and institutes within the DHHS and the VA. A central concern in reviewing federally funded health economics research is the appropriateness of the level of emphasis that funders place on various disease areas. We found that recent federally funded health economics research has focused on infections, cancer, HIV/AIDS, cardiovascular disease, and substance abuse. These are all important topics based on at least one measure of disease burden or health research priority. Cancer, heart disease, and substance abuse are three of the leading causes of death, years of potential life lost, and economic burden on the US population. Infectious diseases and HIV/AIDS are important but lowerranking priorities based on measures of disease burden. The notable attention devoted to these two areas may be justified based on considerations such as the relative recentness of HIV/AIDS and measures to combat it, or in the case of infectious diseases, factors such as an implicit requirement to provide evidence of cost-effectiveness for population- based preventive services or the strong traditional role of government in combating communicable diseases. What is more questionable is the relative lack of attention given to health economics analyses in other important disease areas. In 5 years, federal entities were cited as funders of only 13 studies each in the areas of diabetes and injuries. In mental health, an area ranking high in terms of disease and economic burden, the number of publications is considerably higher—28—but still much lower than the numbers of studies focusing on other high-burden disease areas. Similarly, arthritis, COPD, asthma, and dementia all rank high in terms of disease burden but are the subject of few health economics studies. It is possible that there are fewer studies in these areas for valid reasons—e.g., because of an underlying shortage of data on the effectiveness of interventions or because cost-effectiveness is not relevant to decisions in these areas—but the unevenness in research productivity is cause, at least, for proactive federal scrutiny of research in these areas. Finally, we could not identify a funder that emphasized studies that cut across traditional disease areas. In assessing the health economics research examining different types of interventions, previous studies have found a strong emphasis on studies of pharmaceuticals and surgical interventions and significantly less on health education and care delivery [2,9]. The latter areas may be “softer” and more difficult to evaluate in both clinical and health economics studies, but they are highly relevant to needed change in the current health and health-care environment. Further, given the intense public focus on costs and quality of health care, it seems logical that the assessment of health-care delivery strategies should be a priority for health services research, including economic analysis. Federally supported health economics studies do, in fact, appear to emphasize different areas than found in previous reviews. Publications addressing pharmaceuticals are the most numerous interventions in the articles we examined, but they represent a noticeably lower proportion than Elixhauser et al. [2] found in their study of CEA/CBA studies or than Chapman et al. [9] found in their review of CUAs, a finding consistent with the increasing role of pharmaceutical company sponsorship of CEAs [2]. The federally supported portfolio also included a much lower proportion of articles considering surgical interventions. At the same time, articles considering health education and behavioral interventions represent a greater proportion of the federal portfolio than in these two studies. Studies of health-care delivery are not identified in Elixhauser et al. [2], but they represent a greater proportion of the federal portfolio than found in the CUA database.