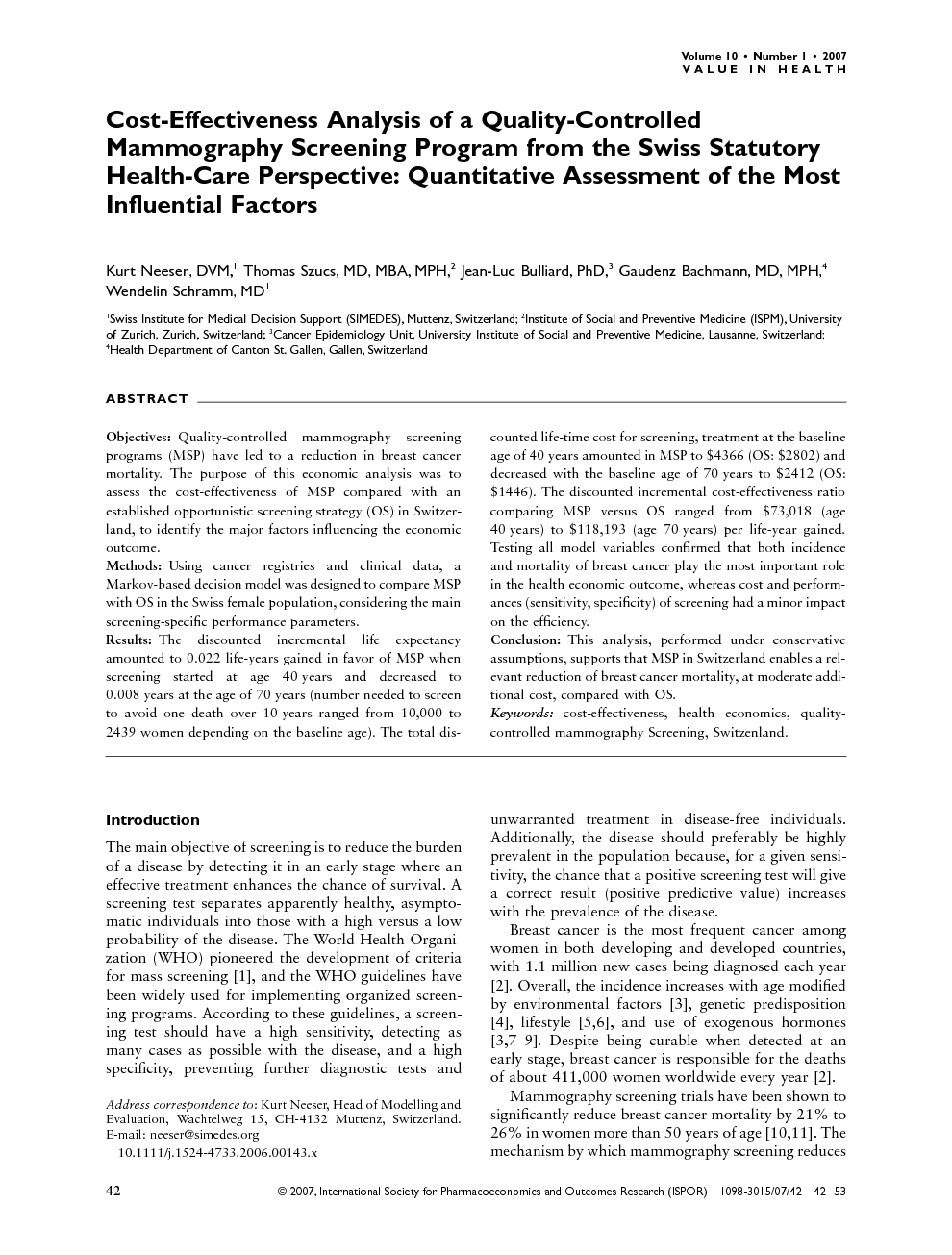 Objective Quality-controlled mammography screening programs (MSP) have led to a reduction in breast cancer mortality. The purpose of this economic analysis was to assess the cost-effectiveness of MSP compared with an established opportunistic screening strategy (OS) in Switzerland, to identify the major factors influencing the economic outcome. Methods Using cancer registries and clinical data, a Markov-based decision model was designed to compare MSP with OS in the Swiss female population, considering the main screening-specific performance parameters. Results The discounted incremental life expectancy amounted to 0.022 life-years gained in favor of MSP when screening started at age 40 years and decreased to 0.008 years at the age of 70 years (number needed to screen to avoid one death over 10 years ranged from 10,000 to 2439 women depending on the baseline age). The total discounted life-time cost for screening, treatment at the baseline age of 40 years amounted in MSP to $4366 (OS: $2802) and decreased with the baseline age of 70 years to $2412 (OS: $1446). The discounted incremental cost-effectiveness ratio comparing MSP versus OS ranged from $73,018 (age 40 years) to $118,193 (age 70 years) per life-year gained. Testing all model variables confirmed that both incidence and mortality of breast cancer play the most important role in the health economic outcome, whereas cost and performances (sensitivity, specificity) of screening had a minor impact on the efficiency. Conclusion This analysis, performed under conservative assumptions, supports that MSP in Switzerland enables a relevant reduction of breast cancer mortality, at moderate additional cost, compared with OS.

The main objective of screening is to reduce the burden of a disease by detecting it in an early stage where an effective treatment enhances the chance of survival. A screening test separates apparently healthy, asymptomatic individuals into those with a high versus a low probability of the disease. The World Health Organization (WHO) pioneered the development of criteria for mass screening [1], and the WHO guidelines have been widely used for implementing organized screening programs. According to these guidelines, a screening test should have a high sensitivity, detecting as many cases as possible with the disease, and a high specificity, preventing further diagnostic tests and unwarranted treatment in disease-free individuals. Additionally, the disease should preferably be highly prevalent in the population because, for a given sensitivity, the chance that a positive screening test will give a correct result (positive predictive value) increases with the prevalence of the disease. Breast cancer is the most frequent cancer among women in both developing and developed countries, with 1.1 million new cases being diagnosed each year [2]. Overall, the incidence increases with age modified by environmental factors [3], genetic predisposition [4], lifestyle [5,6], and use of exogenous hormones [3,7–9]. Despite being curable when detected at an early stage, breast cancer is responsible for the deaths of about 411,000 women worldwide every year [2]. Mammography screening trials have been shown to significantly reduce breast cancer mortality by 21% to 26% in women more than 50 years of age [10,11]. The mechanism by which mammography screening reducesbreast cancer mortality is directly related to the increased chance of detecting a malignant growth at an earlier, curable stage [12]. Based on clinical practice with an established opportunistic screening strategy (OS), the achievable reduction of mortality by a mammography screening program (MSP) in a setting with OS may range from 5% to 20% [13,14]. The impact of MSP on breast cancer mortality is strongest for women more than 50 years old. The evidence is weaker for younger women because 1) the incidence of breast cancer is substantially lower among women in their 40s, although their cancer is more often diagnosed as aggressive; 2) the mammography test is less performing in younger women with denser breast tissue; and 3) the delay in breast cancer mortality is difficult to allocate to the beginning of screening at the age of 40 years rather than at the age of 50 years [15–17]. Because of the increase in comorbidities, a decreasing benefit of MSP is assumed at age more than 70 years, even though the sensitivity and specificity of MSP improve with increasing age [18,19]. Motivated by positive results obtained in randomized screening trials and meta-analyses evaluating MSP, breast cancer screening programs have been introduced in several countries since the mid-1980s [20,21]. In Switzerland, approximately 5000 breast cancers are diagnosed each year and about 1350 deaths from breast cancer are reported [22]. Breast cancer mortality in Switzerland has been decreasing since the early 1990s, whereas the incidence of breast cancer is increasing. Reasons underpinning these temporal changes are multiple, such as better systematic treatment and widespread screening, but also alteration in risk exposures and lifestyle [23–25]. The feasibility and acceptability within the Swiss health-care setting of quality assessed MSP have been demonstrated in a pilot study [21,26]. Since 1999, a Swiss government edict has been in place to finance quality-controlled breast cancer screening programs as part of the service catalog of statutory health insurances. A Swiss MSP quality standard recommendation comprises a two-view mammography, with a blinded double reading performed by two specially trained radiologists, with a third arbitration reading if necessary, and the screening administration (organization, invitation, quality assessment, evaluation) [21,27]. Three regional quality-controlled MSP have been established since 1999 [28]. The efficacy of mammography screening trials was questioned in a meta-analysis that revealed imbalances in the characteristics of the screening and control groups, as well as a discrepancy in the number of randomized women, and concluded that randomized screening trials yielded no protective effect [29,30]. Most arguments against mass screening and criticisms based on randomized screening trials have been rebutted and disproved by scientific reinvestigations confirming that mammography is effective at least in women older than 50 years [11,31–33]. Despite this, some debate persists in Switzerland about the pros and cons of mammography screening, and the medical and economic benefits of MSP versus OS remain uncertain [34]. This cost-effectiveness study was performed to assess the specific Swiss situation, but because of the limited and controversial information regarding indirect costs, only direct costs were implemented.

Based on the present decision analysis with its underlying assumptions, mammography screening has been shown to be effective in terms of reducing mortality and to be worthwhile from an economic perspective. These findings are supported by analyses in other countries. Because these results are derived from a modeling study, future attention should be paid to the results of ongoing structured MSP in Switzerland and the model should be adapted as new evidence arises. The authors thank Dr S. M. Ess (Head Cancer Registry St. Gallen-Appenzell) and Dr J.-P. de Landtsheer (Director of the Breast Cancer Screening Programme in the canton of Vaud) for their comments and assistance in data reviewing. Source of financial support: The Swiss Institute for Medical Decision Support is an independent nonprofit association financed by membership fees and donations. No external funding was provided for this analysis. The authors had full and independent control over the contents of the article.