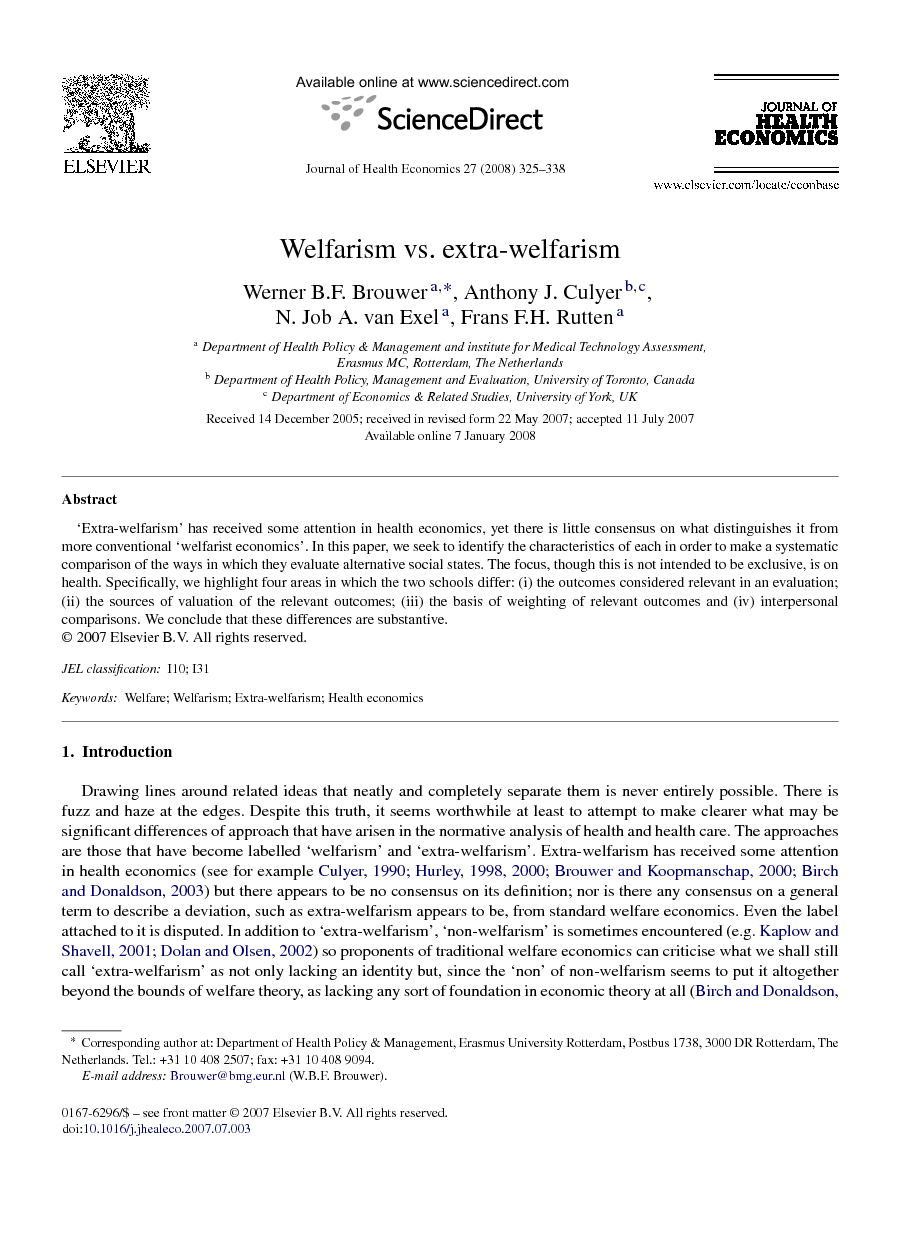 Extra-welfarism’ has received some attention in health economics, yet there is little consensus on what distinguishes it from more conventional ‘welfarist economics’. In this paper, we seek to identify the characteristics of each in order to make a systematic comparison of the ways in which they evaluate alternative social states. The focus, though this is not intended to be exclusive, is on health. Specifically, we highlight four areas in which the two schools differ: (i) the outcomes considered relevant in an evaluation; (ii) the sources of valuation of the relevant outcomes; (iii) the basis of weighting of relevant outcomes and (iv) interpersonal comparisons. We conclude that these differences are substantive.

Drawing lines around related ideas that neatly and completely separate them is never entirely possible. There is fuzz and haze at the edges. Despite this truth, it seems worthwhile at least to attempt to make clearer what may be significant differences of approach that have arisen in the normative analysis of health and health care. The approaches are those that have become labelled ‘welfarism’ and ‘extra-welfarism’. Extra-welfarism has received some attention in health economics (see for example Culyer, 1990, Hurley, 1998, Hurley, 2000, Brouwer and Koopmanschap, 2000 and Birch and Donaldson, 2003) but there appears to be no consensus on its definition; nor is there any consensus on a general term to describe a deviation, such as extra-welfarism appears to be, from standard welfare economics. Even the label attached to it is disputed. In addition to ‘extra-welfarism’, ‘non-welfarism’ is sometimes encountered (e.g. Kaplow and Shavell, 2001 and Dolan and Olsen, 2002) so proponents of traditional welfare economics can criticise what we shall still call ‘extra-welfarism’ as not only lacking an identity but, since the ‘non’ of non-welfarism seems to put it altogether beyond the bounds of welfare theory, as lacking any sort of foundation in economic theory at all (Birch and Donaldson, 2003).1 One might indeed ask further: how is it possible to add anything ‘extra’ to welfarism? If welfare is an ultimate goal and it is comprised of individual utilities, and if anything important for individual welfare can be assigned a utility number, then to add anything ‘extra’ is at best to risk double-counting. So, for example, let it be asserted that ‘process’ is important for social welfare as well as ‘outcome’, then let standard welfarists ‘simply’ assign utilities to processes (of course we know that doing so may by no means be simple) and carry on as usual. Plainly extra-welfarism is an attempt to escape, at least in part, from standard welfarist theory. But from what and to what? To be of interest, extra-welfarism must offer something that welfarism does not permit, despite the all-encompassing appearance of welfarism. In order to understand what might be ‘extra’ about extra-welfarism, we shall first explore what welfarism entails; any ‘extra’ in extra-welfarism will then lie beyond the limits of welfarism and we shall at least be clearer about what we are adding to (or subtracting from) welfarism. Unfortunately, a consensus on the content even of welfarism does not emerge self-evidently from the literature; it seems clear that different conceptions of both extra-welfarism and welfarism prevail. Some confine welfarism to a limited set of properties (e.g. Culyer, 1991), while others follow Bergson in setting no limits on what may count in a social welfare function—processes, institutions, equity, quality of relationships, social norms and so on ad infinitum, as long as these items can be captured in terms of individual utility. Not surprisingly, the content of extra-welfarism is even less obvious from a perusal of the literature. Hurley (1998) for example claims that extra-welfarism replaces ‘utility’ with ‘health’ even though an explicit extra-welfarist like one of us (Culyer, 1990) cautions against discarding any outcomes, whether utility or health, and against discarding the relevance of a functional relationship between health and utility. Others may see extra-welfarism as a method of analysis in which explicit (and, in general, non-unitary) equity weights are attached to entities like individuals’ utility or health (e.g. Dolan, 1999a). It can be seen archetypically in cost-utility analysis where, instead of using effective demand and willingness to pay (as in cost-benefit analysis), something like ‘need’ is used (e.g. Culyer, 1995b, Culyer, 2007a and Culyer, 2007b). The latter concept is unrelated to the consumer's ability to pay, which thus insulates welfare judgments not only from the prevailing income distribution but also from the Pareto principle as used within the traditional welfare economic school (Brouwer and Koopmanschap, 2000). This lack of clarity plainly hinders understanding of the differences between the two schools of thought. In this paper, we try to provide a clear dogmatic statement of what welfarism entails and, hence, an indication of wherein the ‘extra’ in extra-welfarism lies. We focus on theory rather than on applied work and highlight two interrelated topics that we conjecture to lie at the root of the distinction between welfarism and extra-welfarism: