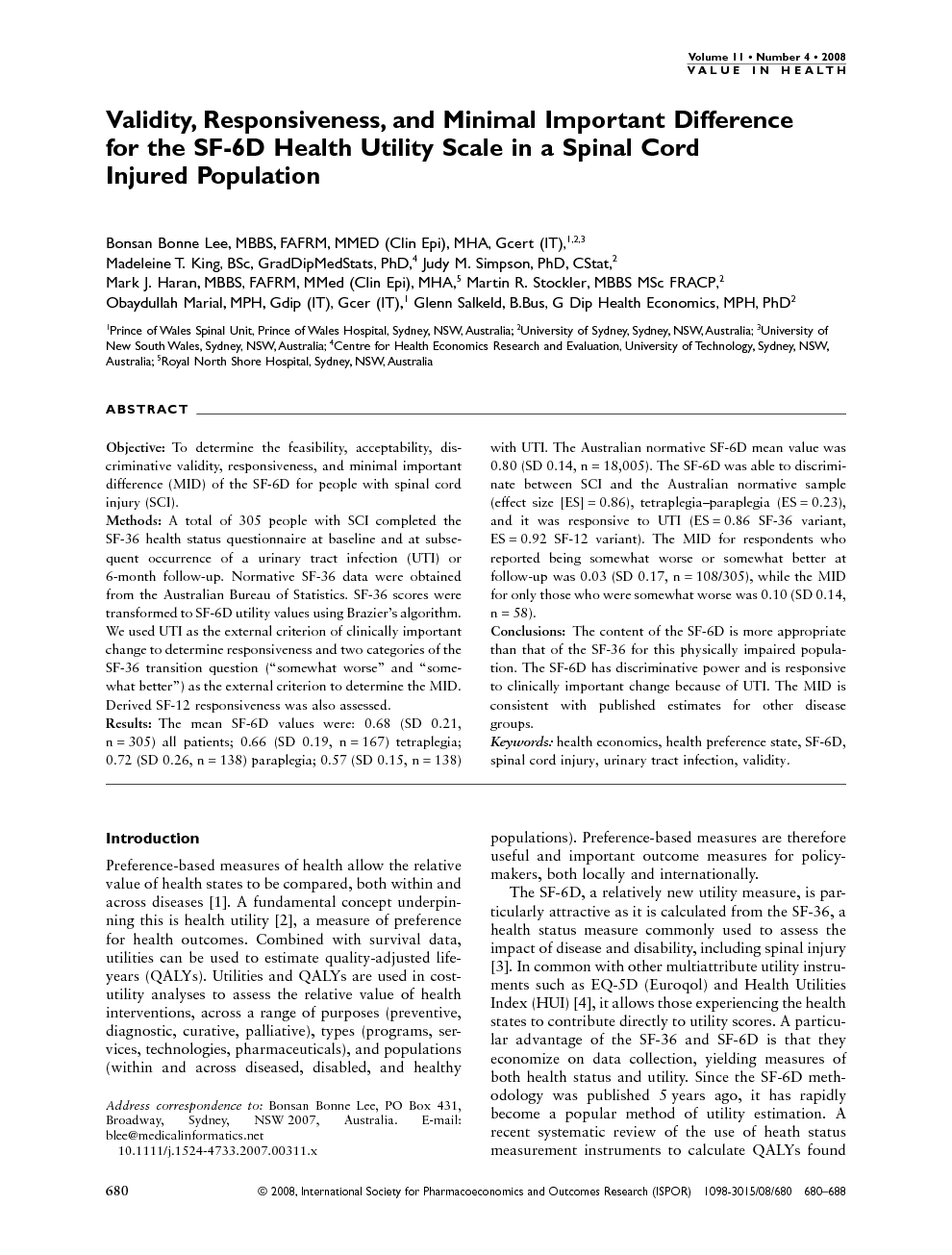 Objective To determine the feasibility, acceptability, discriminative validity, responsiveness, and minimal important difference (MID) of the SF-6D for people with spinal cord injury (SCI). Methods A total of 305 people with SCI completed the SF-36 health status questionnaire at baseline and at subsequent occurrence of a urinary tract infection (UTI) or 6-month follow-up. Normative SF-36 data were obtained from the Australian Bureau of Statistics. SF-36 scores were transformed to SF-6D utility values using Brazier's algorithm. We used UTI as the external criterion of clinically important change to determine responsiveness and two categories of the SF-36 transition question (“somewhat worse” and “somewhat better”) as the external criterion to determine the MID. Derived SF-12 responsiveness was also assessed. Results The mean SF-6D values were: 0.68 (SD 0.21, n = 305) all patients; 0.66 (SD 0.19, n = 167) tetraplegia; 0.72 (SD 0.26, n = 138) paraplegia; 0.57 (SD 0.15, n = 138) with UTI. The Australian normative SF-6D mean value was 0.80 (SD 0.14, n = 18,005). The SF-6D was able to discriminate between SCI and the Australian normative sample (effect size [ES] = 0.86), tetraplegia–paraplegia (ES = 0.23), and it was responsive to UTI (ES = 0.86 SF-36 variant, ES = 0.92 SF-12 variant). The MID for respondents who reported being somewhat worse or somewhat better at follow-up was 0.03 (SD 0.17, n = 108/305), while the MID for only those who were somewhat worse was 0.10 (SD 0.14, n = 58). Conclusions The content of the SF-6D is more appropriate than that of the SF-36 for this physically impaired population. The SF-6D has discriminative power and is responsive to clinically important change because of UTI. The MID is consistent with published estimates for other disease groups.

Preference-based measures of health allow the relative value of health states to be compared, both within and across diseases [1]. A fundamental concept underpinning this is health utility [2], a measure of preference for health outcomes. Combined with survival data, utilities can be used to estimate quality-adjusted lifeyears (QALYs). Utilities and QALYs are used in costutility analyses to assess the relative value of health interventions, across a range of purposes (preventive, diagnostic, curative, palliative), types (programs, services, technologies, pharmaceuticals), and populations (within and across diseased, disabled, and healthy populations). Preference-based measures are therefore useful and important outcome measures for policymakers, both locally and internationally. The SF-6D, a relatively new utility measure, is particularly attractive as it is calculated from the SF-36, a health status measure commonly used to assess the impact of disease and disability, including spinal injury [3]. In common with other multiattribute utility instruments such as EQ-5D (Euroqol) and Health Utilities Index (HUI) [4], it allows those experiencing the health states to contribute directly to utility scores. A particular advantage of the SF-36 and SF-6D is that they economize on data collection, yielding measures of both health status and utility. Since the SF-6D methodology was published 5 years ago, it has rapidly become a popular method of utility estimation. A recent systematic review of the use of heath status measurement instruments to calculate QALYs foundthat, despite its contemporary origin, the SF-6D accounted for 5% of the instruments used [5]. The SF-6D is a utility measure based on a sixdimensional health state classification. It is derived from a subset of 11 SF-36 questions covering the dimensions of Physical Functioning, Role Limitation, Social Functioning, Pain, Mental Health, and Vitality. It allows a possible 18,000 health states to be defined. A survey (involving SF-6D, ranking, and standard gamble) of 249 health states defined by the SF-6D was valued by a representative sample of the UK general public (n = 611). Econometric methods were then used to determine a model for predicting the standard gamble scores generated by the valuation survey [6]. Brazier et al. have shown that the SF-6D is a viable alternative preference measure [6]. It can be derived from either the SF-36 [6] or the shorter SF-12 [7]. It has been suggested that the SF-6D may be more sensitive than the EQ-5D, especially for mild–moderate health issues [6]. Limitations and outstanding issues with the SF-6D include whether it compromises the richness of the original SF-36 [6] and whether it is less sensitive when used in poorer health states [6,8,9]. It is therefore important that additional validation studies are performed in different populations and settings. The present article describes such a validation in an Australian population with spinal cord injury (SCI), most of whom were living in a general community setting. The minimal important difference (MID) allows clinicians to determine whether a change observed on a self-reported health rating scale is meaningful or trivial. It has been defined as the smallest difference in score that the patient perceives as beneficial [10]. For our purposes, in the absence of significant side effects or cost barriers, this would lead to a change in clinical decision-making. This article provides the first validation and MID values for the SF-6D in the SCI population. We assess the acceptability and appropriateness of the SF-6D for application in SCI, evaluate its discriminative ability, and determine its responsiveness to clinically important change. The external criterion used to define clinically important change is the occurrence of a urinary tract infection (UTI), a common comorbidity in this patient population group, with a reported incidence of 1.82 episodes per annum [11,12].

The SF-6D can reliably discriminate not only the gross differences between persons with SCI and a normative population group, but also the smaller and more clinically relevant differences between patients with paraplegia and tetraplegia. The SF-12 and SF-36 variants of the SF-6D are both responsive to the additional disease burden of UTI in this patient group. The MID is consistent with published estimates for other disease groups. The content of the SF-6D makes it more appropriate than the SF-36 for use in this physically impaired population.