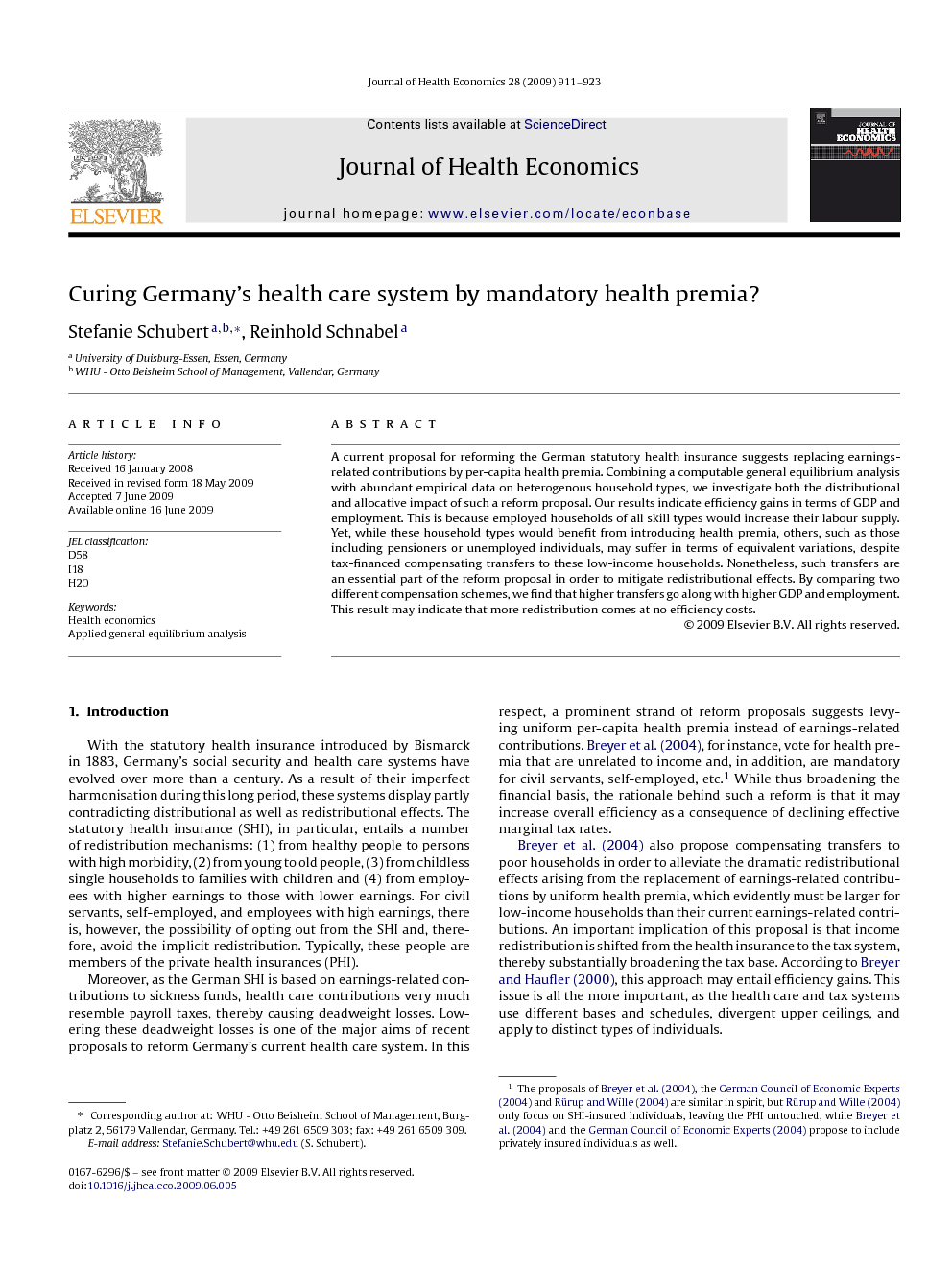 A current proposal for reforming the German statutory health insurance suggests replacing earnings-related contributions by per-capita health premia. Combining a computable general equilibrium analysis with abundant empirical data on heterogenous household types, we investigate both the distributional and allocative impact of such a reform proposal. Our results indicate efficiency gains in terms of GDP and employment. This is because employed households of all skill types would increase their labour supply. Yet, while these household types would benefit from introducing health premia, others, such as those including pensioners or unemployed individuals, may suffer in terms of equivalent variations, despite tax-financed compensating transfers to these low-income households. Nonetheless, such transfers are an essential part of the reform proposal in order to mitigate redistributional effects. By comparing two different compensation schemes, we find that higher transfers go along with higher GDP and employment. This result may indicate that more redistribution comes at no efficiency costs.

With the statutory health insurance introduced by Bismarck in 1883, Germany’s social security and health care systems have evolved over more than a century. As a result of their imperfect harmonisation during this long period, these systems display partly contradicting distributional as well as redistributional effects. The statutory health insurance (SHI), in particular, entails a number of redistribution mechanisms: (1) from healthy people to persons with high morbidity, (2) from young to old people, (3) from childless single households to families with children and (4) from employees with higher earnings to those with lower earnings. For civil servants, self-employed, and employees with high earnings, there is, however, the possibility of opting out from the SHI and, therefore, avoid the implicit redistribution. Typically, these people are members of the private health insurances (PHI). Moreover, as the German SHI is based on earnings-related contributions to sickness funds, health care contributions very much resemble payroll taxes, thereby causing deadweight losses. Lowering these deadweight losses is one of the major aims of recent proposals to reform Germany’s current health care system. In this respect, a prominent strand of reform proposals suggests levying uniform per-capita health premia instead of earnings-related contributions. Breyer et al. (2004), for instance, vote for health premia that are unrelated to income and, in addition, are mandatory for civil servants, self-employed, etc.1 While thus broadening the financial basis, the rationale behind such a reform is that it may increase overall efficiency as a consequence of declining effective marginal tax rates. Breyer et al. (2004) also propose compensating transfers to poor households in order to alleviate the dramatic redistributional effects arising from the replacement of earnings-related contributions by uniform health premia, which evidently must be larger for low-income households than their current earnings-related contributions. An important implication of this proposal is that income redistribution is shifted from the health insurance to the tax system, thereby substantially broadening the tax base. According to Breyer and Haufler (2000), this approach may entail efficiency gains. This issue is all the more important, as the health care and tax systems use different bases and schedules, divergent upper ceilings, and apply to distinct types of individuals. Using an applied computable general equilibrium (CGE) model that takes account of feedback effects resulting from price and wage responses, we assess both the distributional and allocative impacts arising from the introduction of health premia for only the SHI-insured individuals. We distinguish between two reform scenarios that differ in the compensation scheme for low-income households. In Scenario 1, a household is entitled to compensating transfers if the health premia exceed a threshold of 10% of its gross income. Scenario 2 implies household-specific compensations for those households whose burden, measured as the ratio of health premia to gross household income, would be higher than in the status quo. Several features distinguish our analysis, which treats Germany as a small open economy. Firstly, unlike other applied CGE models in the area of health and social policy, such as Arntz et al. (2008) and Rutten et al. (2006), we consider four, rather than only two types of labour supply: low-, medium- and high-skilled work and a type of labour supply that is not liable to mandatory health care and other social security contributions. Secondly, in addition to unemployed individuals, we take particular account of pensioners, as low-income households are frequently found among these groups. Thirdly, rather than using stylised facts, we incorporate the most recent health care, social security, and income tax schedules of 2008. There are numerous articles that investigate the effects of potential reforms of the German SHI with different foci. Most importantly, Knappe and Arnold (2002) analyse the health premia proposal with respect to efficiency and justice. These authors find that an increase in the income tax base allows for financing compensating transfers without increasing the households’ marginal tax rates. While this analysis is a partial equilibrium study and, hence, is unable to capture feedback effects, Fehr and Jess (2006) show, using a CGE framework, that a health premia reform leads to both higher employment and GDP. In contrast to Fehr and Jess (2006), who balance the government’s budget by raising consumption taxes, we adjust the income tax schedule. This is in line with Boeters et al. (2006), who model a reform of the social assistance within a CGE framework. The subsequent section sketches the major components of our basic general equilibrium model. Section 3 presents the counterfactual reform setup. The results of the CGE simulations are discussed in Section 4. The last section summarises the main results and concludes.

An important proposal in the ongoing debate on potential reforms of Germany’s statutory health insurance is to levy uniform per-capita health premia instead of earnings-related contributions. To limit the implied financial burden for low-income households, this suggestion is supplemented by compensating transfers that are financed out of the general tax system. In this paper, we have combined a computable general equilibrium model with empirical data on heterogenous household types in order to evaluate the distributional and allocative impacts of such reform proposals. We have distinguished two reform scenarios that only differ in the compensation scheme targeted at low-income households. In Scenario 1, we have stipulated a uniform maximum burden for all households, while in Scenario 2 the maximum burden due to the introduction of health premia is limited by those specific levels that households face in the prevailing health care system. By comparison, we find that the scenario including a household-specific compensation scheme performs slightly better than Scenario 1. A possible interpretation of this outcome is that more redistribution comes at no efficiency cost, as the higher transfers associated with Scenario 2 are accompanied by higher GDP and employment. This scenario, however, may be more costly to administer, an issue that has not been taken into account. While all employees would gain from both reforms, individuals with higher education levels benefit more than the low skilled. Even privately insured individuals, who are not directly affected by our reform scenarios, would enjoy welfare improvements. Yet, other households, such as those including pensioners or unemployed individuals, may suffer from such reforms, as is indicated by negative equivalent variations. All in all, however, the efficiency gains in terms of GDP and employment indicate that the society would benefit from the introduction of health premia. It bears noting, finally, that although the level of health care expenditures is an important political decision variable, it has been assumed here to be exogenous. Future research may therefore focus on analysing as to whether deductibles and coinsurance payments may help to substantially reduce health care expenditures.