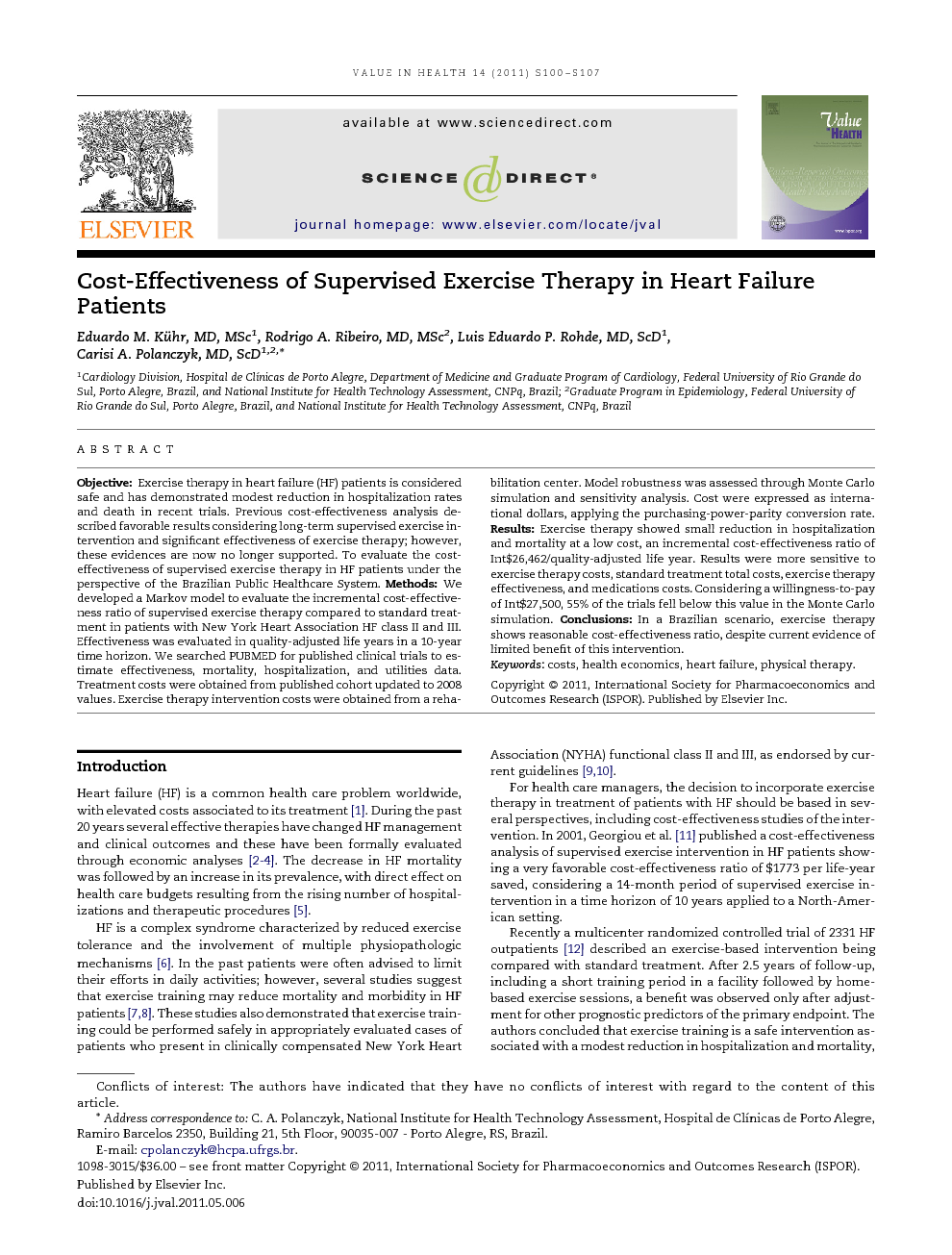 Heart failure (HF) is a common health care problem worldwide, with elevated costs associated to its treatment [1]. During the past 20 years several effective therapies have changed HF management and clinical outcomes and these have been formally evaluated through economic analyses [2], [3] and [4]. The decrease in HF mortality was followed by an increase in its prevalence, with direct effect on health care budgets resulting from the rising number of hospitalizations and therapeutic procedures [5]. HF is a complex syndrome characterized by reduced exercise tolerance and the involvement of multiple physiopathologic mechanisms [6]. In the past patients were often advised to limit their efforts in daily activities; however, several studies suggest that exercise training may reduce mortality and morbidity in HF patients [7] and [8]. These studies also demonstrated that exercise training could be performed safely in appropriately evaluated cases of patients who present in clinically compensated New York Heart Association (NYHA) functional class II and III, as endorsed by current guidelines [9] and [10]. For health care managers, the decision to incorporate exercise therapy in treatment of patients with HF should be based in several perspectives, including cost-effectiveness studies of the intervention. In 2001, Georgiou et al. [11] published a cost-effectiveness analysis of supervised exercise intervention in HF patients showing a very favorable cost-effectiveness ratio of $1773 per life-year saved, considering a 14-month period of supervised exercise intervention in a time horizon of 10 years applied to a North-American setting. Recently a multicenter randomized controlled trial of 2331 HF outpatients [12] described an exercise-based intervention being compared with standard treatment. After 2.5 years of follow-up, including a short training period in a facility followed by home-based exercise sessions, a benefit was observed only after adjustment for other prognostic predictors of the primary endpoint. The authors concluded that exercise training is a safe intervention associated with a modest reduction in hospitalization and mortality, far from the assumed estimations in previous cost-effectiveness analysis [12]. In this study we evaluated the economic impact of a supervised exercise intervention in a hypothetic stable outpatient HF cohort, considering current evidence of effectiveness and costs, offering health care professionals an updated assessment on the role of exercise in the management of HF.