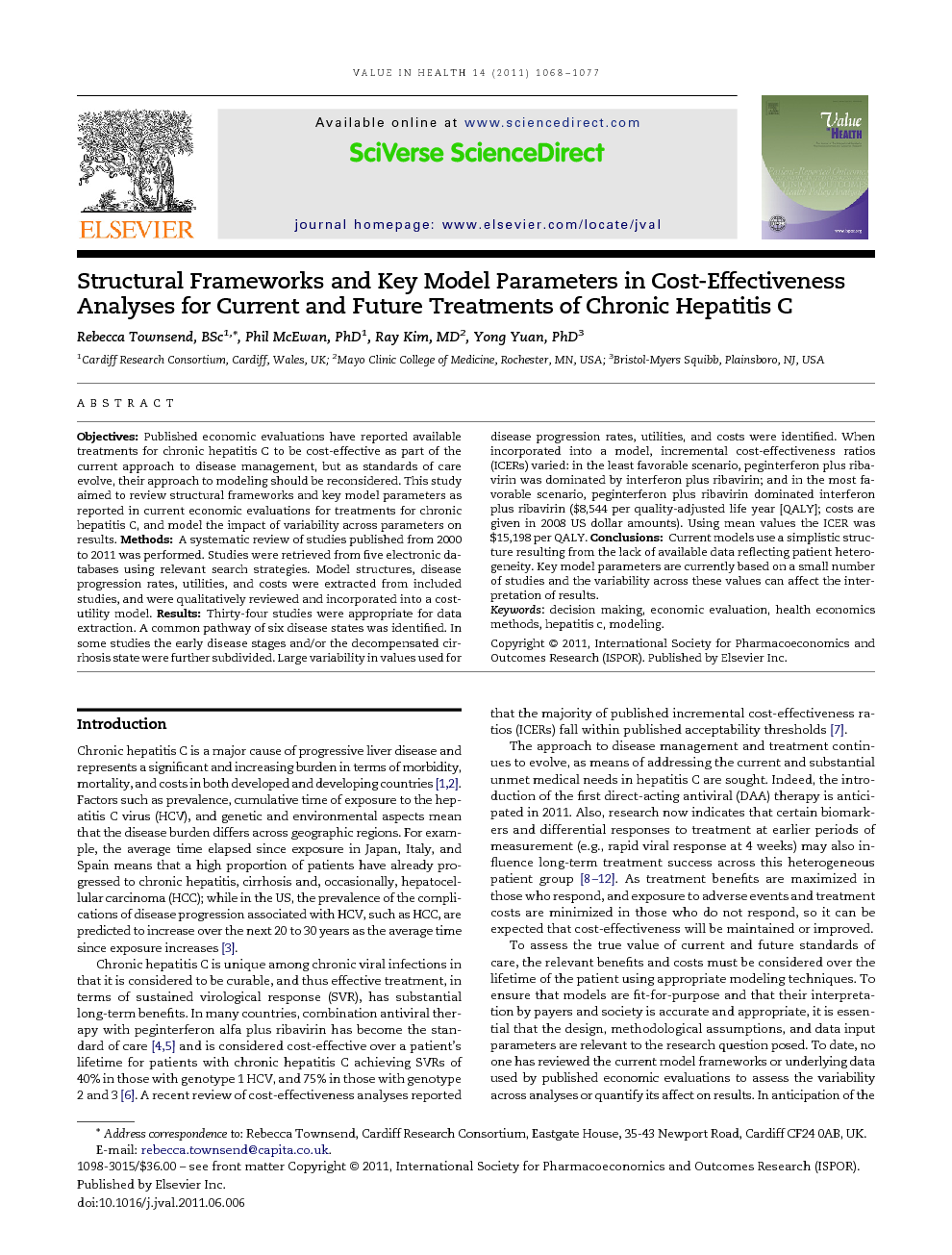 Objectives Published economic evaluations have reported available treatments for chronic hepatitis C to be cost-effective as part of the current approach to disease management, but as standards of care evolve, their approach to modeling should be reconsidered. This study aimed to review structural frameworks and key model parameters as reported in current economic evaluations for treatments for chronic hepatitis C, and model the impact of variability across parameters on results. Methods A systematic review of studies published from 2000 to 2011 was performed. Studies were retrieved from five electronic databases using relevant search strategies. Model structures, disease progression rates, utilities, and costs were extracted from included studies, and were qualitatively reviewed and incorporated into a cost-utility model. Results Thirty-four studies were appropriate for data extraction. A common pathway of six disease states was identified. In some studies the early disease stages and/or the decompensated cirrhosis state were further subdivided. Large variability in values used for disease progression rates, utilities, and costs were identified. When incorporated into a model, incremental cost-effectiveness ratios (ICERs) varied: in the least favorable scenario, peginterferon plus ribavirin was dominated by interferon plus ribavirin; and in the most favorable scenario, peginterferon plus ribavirin dominated interferon plus ribavirin ($8,544 per quality-adjusted life year [QALY]; costs are given in 2008 US dollar amounts). Using mean values the ICER was $15,198 per QALY. Conclusions Current models use a simplistic structure resulting from the lack of available data reflecting patient heterogeneity. Key model parameters are currently based on a small number of studies and the variability across these values can affect the interpretation of results.

Chronic hepatitis C is a major cause of progressive liver disease and represents a significant and increasing burden in terms of morbidity, mortality, and costs in both developed and developing countries [1] and [2]. Factors such as prevalence, cumulative time of exposure to the hepatitis C virus (HCV), and genetic and environmental aspects mean that the disease burden differs across geographic regions. For example, the average time elapsed since exposure in Japan, Italy, and Spain means that a high proportion of patients have already progressed to chronic hepatitis, cirrhosis and, occasionally, hepatocellular carcinoma (HCC); while in the US, the prevalence of the complications of disease progression associated with HCV, such as HCC, are predicted to increase over the next 20 to 30 years as the average time since exposure increases [3]. Chronic hepatitis C is unique among chronic viral infections in that it is considered to be curable, and thus effective treatment, in terms of sustained virological response (SVR), has substantial long-term benefits. In many countries, combination antiviral therapy with peginterferon alfa plus ribavirin has become the standard of care [4] and [5] and is considered cost-effective over a patient's lifetime for patients with chronic hepatitis C achieving SVRs of 40% in those with genotype 1 HCV, and 75% in those with genotype 2 and 3 [6]. A recent review of cost-effectiveness analyses reported that the majority of published incremental cost-effectiveness ratios (ICERs) fall within published acceptability thresholds [7]. The approach to disease management and treatment continues to evolve, as means of addressing the current and substantial unmet medical needs in hepatitis C are sought. Indeed, the introduction of the first direct-acting antiviral (DAA) therapy is anticipated in 2011. Also, research now indicates that certain biomarkers and differential responses to treatment at earlier periods of measurement (e.g., rapid viral response at 4 weeks) may also influence long-term treatment success across this heterogeneous patient group [8], [9], [10], [11] and [12]. As treatment benefits are maximized in those who respond, and exposure to adverse events and treatment costs are minimized in those who do not respond, so it can be expected that cost-effectiveness will be maintained or improved. To assess the true value of current and future standards of care, the relevant benefits and costs must be considered over the lifetime of the patient using appropriate modeling techniques. To ensure that models are fit-for-purpose and that their interpretation by payers and society is accurate and appropriate, it is essential that the design, methodological assumptions, and data input parameters are relevant to the research question posed. To date, no one has reviewed the current model frameworks or underlying data used by published economic evaluations to assess the variability across analyses or quantify its affect on results. In anticipation of the advent of new approaches to treatment and new agents, it is timely to review the currently available analyses and describe their underlying data sources to aid future modeling activities. The objective of this study is to review the model structural frameworks and key parameters reported in published economic evaluations of treatments for chronic hepatitis C, and to use one such model to explore the impact of variability in key parameters on resulting ICERs.