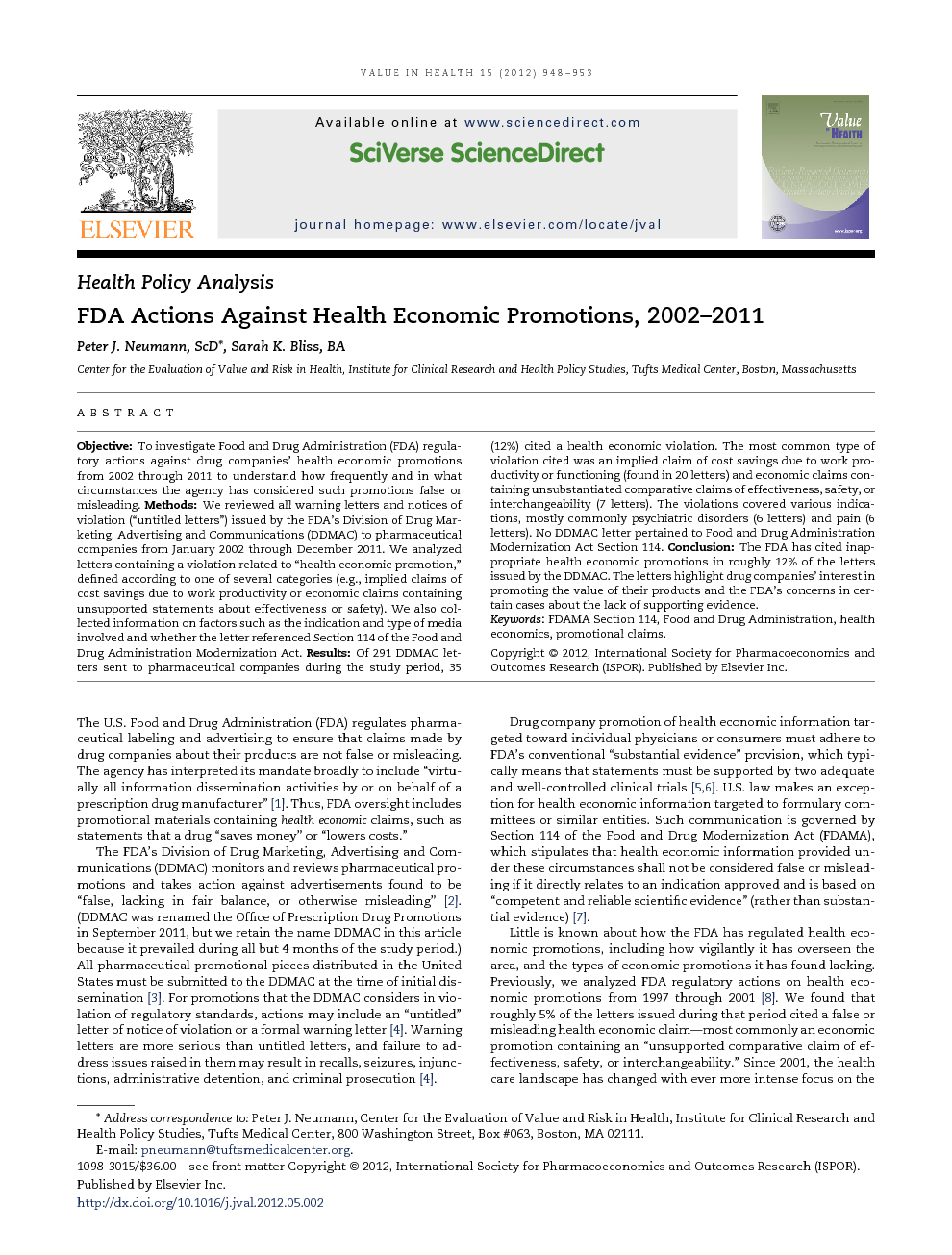 Objective To investigate Food and Drug Administration (FDA) regulatory actions against drug companies' health economic promotions from 2002 through 2011 to understand how frequently and in what circumstances the agency has considered such promotions false or misleading. Methods We reviewed all warning letters and notices of violation (“untitled letters”) issued by the FDA's Division of Drug Marketing, Advertising and Communications (DDMAC) to pharmaceutical companies from January 2002 through December 2011. We analyzed letters containing a violation related to “health economic promotion,” defined according to one of several categories (e.g., implied claims of cost savings due to work productivity or economic claims containing unsupported statements about effectiveness or safety). We also collected information on factors such as the indication and type of media involved and whether the letter referenced Section 114 of the Food and Drug Administration Modernization Act. Results Of 291 DDMAC letters sent to pharmaceutical companies during the study period, 35 (12%) cited a health economic violation. The most common type of violation cited was an implied claim of cost savings due to work productivity or functioning (found in 20 letters) and economic claims containing unsubstantiated comparative claims of effectiveness, safety, or interchangeability (7 letters). The violations covered various indications, mostly commonly psychiatric disorders (6 letters) and pain (6 letters). No DDMAC letter pertained to Food and Drug Administration Modernization Act Section 114. Conclusion The FDA has cited inappropriate health economic promotions in roughly 12% of the letters issued by the DDMAC. The letters highlight drug companies' interest in promoting the value of their products and the FDA's concerns in certain cases about the lack of supporting evidence.

The U.S. Food and Drug Administration (FDA) regulates pharmaceutical labeling and advertising to ensure that claims made by drug companies about their products are not false or misleading. The agency has interpreted its mandate broadly to include “virtually all information dissemination activities by or on behalf of a prescription drug manufacturer” [1]. Thus, FDA oversight includes promotional materials containing health economic claims, such as statements that a drug “saves money” or “lowers costs.” The FDA's Division of Drug Marketing, Advertising and Communications (DDMAC) monitors and reviews pharmaceutical promotions and takes action against advertisements found to be “false, lacking in fair balance, or otherwise misleading” [2]. (DDMAC was renamed the Office of Prescription Drug Promotions in September 2011, but we retain the name DDMAC in this article because it prevailed during all but 4 months of the study period.) All pharmaceutical promotional pieces distributed in the United States must be submitted to the DDMAC at the time of initial dissemination [3]. For promotions that the DDMAC considers in violation of regulatory standards, actions may include an “untitled” letter of notice of violation or a formal warning letter [4]. Warning letters are more serious than untitled letters, and failure to address issues raised in them may result in recalls, seizures, injunctions, administrative detention, and criminal prosecution [4]. Drug company promotion of health economic information targeted toward individual physicians or consumers must adhere to FDA's conventional “substantial evidence” provision, which typically means that statements must be supported by two adequate and well-controlled clinical trials [5] and [6]. U.S. law makes an exception for health economic information targeted to formulary committees or similar entities. Such communication is governed by Section 114 of the Food and Drug Modernization Act (FDAMA), which stipulates that health economic information provided under these circumstances shall not be considered false or misleading if it directly relates to an indication approved and is based on “competent and reliable scientific evidence” (rather than substantial evidence) [7]. Little is known about how the FDA has regulated health economic promotions, including how vigilantly it has overseen the area, and the types of economic promotions it has found lacking. Previously, we analyzed FDA regulatory actions on health economic promotions from 1997 through 2001 [8]. We found that roughly 5% of the letters issued during that period cited a false or misleading health economic claim—most commonly an economic promotion containing an “unsupported comparative claim of effectiveness, safety, or interchangeability.” Since 2001, the health care landscape has changed with ever more intense focus on the economic value of therapies. In this article, we expand on our previous analysis and update it through 2011. Our objectives were to understand the frequency and nature of FDA regulatory actions against inappropriate health economic promotions since 2001. We also investigated whether the FDA has ever issued a regulatory action pertaining to a violation of FDAMA Section 114.