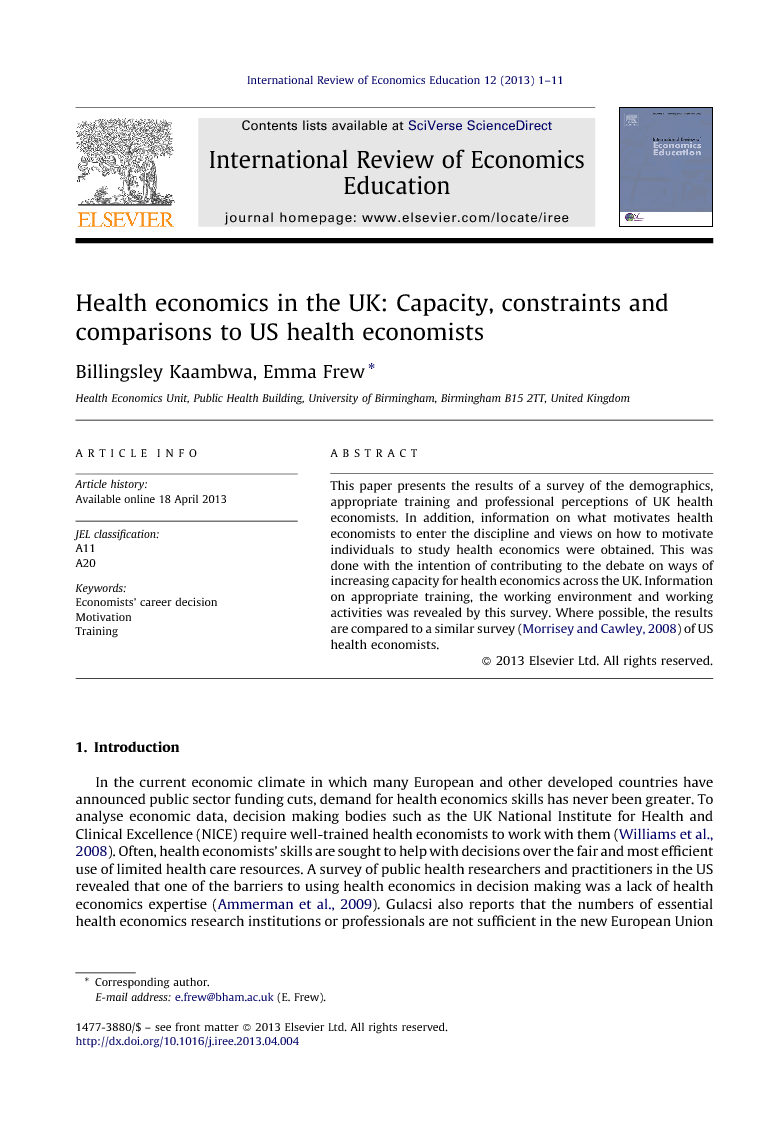 In the current economic climate in which many European and other developed countries have announced public sector funding cuts, demand for health economics skills has never been greater. To analyse economic data, decision making bodies such as the UK National Institute for Health and Clinical Excellence (NICE) require well-trained health economists to work with them (Williams et al., 2008). Often, health economists’ skills are sought to help with decisions over the fair and most efficient use of limited health care resources. A survey of public health researchers and practitioners in the US revealed that one of the barriers to using health economics in decision making was a lack of health economics expertise (Ammerman et al., 2009). Gulacsi also reports that the numbers of essential health economics research institutions or professionals are not sufficient in the new European Union member states (Gulacsi, 2007). Similarly, most would agree that within the UK, demand for health economists far outweighs supply. Health economics, relative to mainstream economics is a new discipline (Madden et al., 2009). There are many potential career pathways for a graduate in health economics and this is testament to the diversity of skills that a health economist can possess. Within academia, health economists often find themselves in the ‘middle ground’ positioned between the discipline of mainstream economics and Medical Schools/Public Health departments. Health economists can enter into the discipline from a variety of backgrounds, for example, from mainstream economics, public health or from operational research. Outside academia, health economists might be based within Government departments, work for consultancy firms or have chosen a career within the pharmaceutical industry. This can lead to a situation where there are many health economists from a variety of backgrounds, working across different sectors doing very different roles. Similar to the US setting reported by Morrisey and Cawley in their survey published in 2008 (hereafter simply referred to as ‘the US survey’), in the UK, little is known about the demographic characteristics and other features of health economists. This paper presents the results of an online UK-based survey of health economists undertaken between 16 May and 30 June 2008. Results on demographics, training and professional perceptions are presented. Attention is also given to what motivates health economists to enter the discipline and therefore how we can motivate undergraduate students to undertake a postgraduate degree and choose health economics as a potential career. Where possible, the results are compared to the US survey