عنوان انگلیسی
Disaggregated analysis of US energy consumption in the 1990s: evidence of the effects of the internet and rapid economic growth
دانلود فوری مقاله + سفارش ترجمه 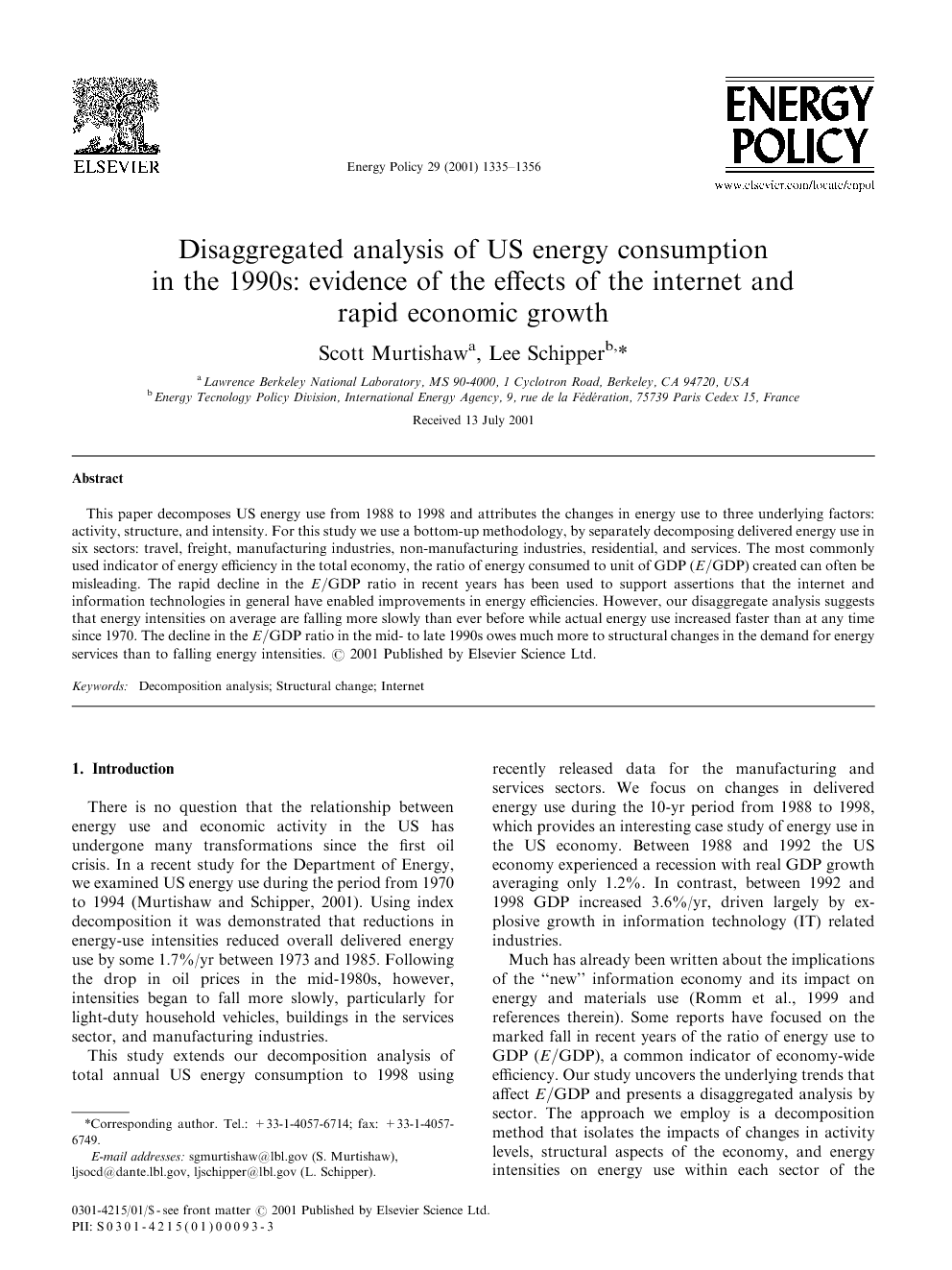 This paper decomposes US energy use from 1988 to 1998 and attributes the changes in energy use to three underlying factors: activity, structure, and intensity. For this study we use a bottom-up methodology, by separately decomposing delivered energy use in six sectors: travel, freight, manufacturing industries, non-manufacturing industries, residential, and services. The most commonly used indicator of energy efficiency in the total economy, the ratio of energy consumed to unit of GDP (E/GDP) created can often be misleading. The rapid decline in the E/GDP ratio in recent years has been used to support assertions that the internet and information technologies in general have enabled improvements in energy efficiencies. However, our disaggregate analysis suggests that energy intensities on average are falling more slowly than ever before while actual energy use increased faster than at any time since 1970. The decline in the E/GDP ratio in the mid- to late 1990s owes much more to structural changes in the demand for energy services than to falling energy intensities.

There is no question that the relationship between energy use and economic activity in the US has undergone many transformations since the first oil crisis. In a recent study for the Department of Energy, we examined US energy use during the period from 1970 to 1994 (Murtishaw and Schipper, 2001). Using index decomposition it was demonstrated that reductions in energy-use intensities reduced overall delivered energy use by some 1.7%/yr between 1973 and 1985. Following the drop in oil prices in the mid-1980s, however, intensities began to fall more slowly, particularly for light-duty household vehicles, buildings in the services sector, and manufacturing industries. This study extends our decomposition analysis of total annual US energy consumption to 1998 using recently released data for the manufacturing and services sectors. We focus on changes in delivered energy use during the 10-yr period from 1988 to 1998, which provides an interesting case study of energy use in the US economy. Between 1988 and 1992 the US economy experienced a recession with real GDP growth averaging only 1.2%. In contrast, between 1992 and 1998 GDP increased 3.6%/yr, driven largely by explosive growth in information technology (IT) related industries. Much has already been written about the implications of the “new” information economy and its impact on energy and materials use (Romm et al., 1999 and references therein). Some reports have focused on the marked fall in recent years of the ratio of energy use to GDP (E/GDP), a common indicator of economy-wide efficiency. Our study uncovers the underlying trends that affect E/GDP and presents a disaggregated analysis by sector. The approach we employ is a decomposition method that isolates the impacts of changes in activity levels, structural aspects of the economy, and energy intensities on energy use within each sector of the economy. We also demonstrate that reliance on the E/GDP ratio alone does not accurately measure how energy–economy relationships in the US economy are changing. This report seeks to clarify the recent debate on efficiency trends in the US and demonstrates the importance of disaggregated analysis in the study of changes in total national energy consumption. To our knowledge there is no other comprehensive disaggregated analysis of US energy uses in recent years as yet available. If the information economy were having a significant impact on energy use in the US economy, certain energy end uses would be expected to rise or fall relative to the others. For example, freight activity, particularly for non-bulk items sent by trucks or air, may increase as more consumer products are ordered over the web and as more internet-based supply management enables a greater use of just-in-time delivery. A second probable effect is that electronics manufacturing, which generates a relatively large amount of value added per unit of energy use, would account for a greater share of value added in manufacturing and thus lower the aggregate intensity of the manufacturing sector. Finally, the use of IT in business could increase productivity of all factors, by facilitating communication and coordination of activities and enabling some business to exist in largely virtual space, thus requiring less physical space to store or display products. These latter productivity effects are difficult to capture without a disaggregated level of analysis beyond the scope of this report. While this report will attempt to address an analysis of the first two factors, the discussion involving enhanced productivity will by necessity be limited to energy use trends that can only suggest whether the internet economy, and IT more generally, are having such an effect. We provide an overview of the changes in total and sectoral energy use that occurred between 1988 and 1998 in Section 2. Detailed analyses of energy use by sector and decomposition of changes in energy use into structural and intensity effects are presented in Section 3. Sector-specific data and methodological issues are also provided at the beginning of each corresponding subsection. For space considerations, we omit discussion of the non-manufacturing industries sector (agriculture, mining, and construction), which only consumed about 6% of 1998 total final energy (see Murtishaw et al., 2000, for a study of the non-manufacturing industries). Section 4 returns to a review of energy use across the entire economy, this time decomposed to isolate true energy savings due to declines in energy intensities from changes in energy use driven by structural changes. Finally we summarize our findings in Section 5 and provide concluding thoughts on how IT may or may not be contributing to energy savings in the US economy. We refer readers to Murtishaw and Schipper (2001) for detailed descriptions of the methodologies employed in constructing our indicators and decomposing the trends in the time series. In addition, that report provides a comprehensive list of the principal data sources used for the energy consumption and structural indicators. The approach used is not new. Schipper et al. (1990) carried out a similar analysis of the US through the late 1980s. Schipper et al. (1993) applied the techniques first to Denmark, then to Sweden. Schipper et al. (2001) applied the AWD indices to energy use in Australia. The Office of Energy Efficiency Office of Natural Resources Canada (OEE, 2000) applies similar techniques each year to measuring changes in energy use in Canada. Earlier efforts (Golove and Schipper, 1997; Schipper et al., 1997b) extended the economy-wide analyses to carbon emissions first to the US and then for a number of IEA member countries.

Important changes have taken place in US energy use since the mid-1990s when the E/GDP ratio began to fall at rates not seen since the early 1980s. Whereas the main cause of the decline in the 1970s and 1980s was lower energy intensities, most of the decline since 1994 has been due to two kinds of structural changes in the economy: • GDP growth in manufacturing was led by non-energy intensive industries. Between 1994 and 1998 this development reduced aggregate energy use in manufacturing, relative to manufacturing value added, by over 8%. • Physical measures of activity in the economy, such as automobile or truck km driven, home area heated, services floor area per value added, or ownership of electric appliances have generally not grown as rapidly as GDP since the 1960s. However, this measure of energy services demanded per unit of GDP generated began to fall rapidly after a period of little change from the mid-1980s to the mid-1990s. For the first time since data are available for analysis (1960), structural changes had a larger impact on the E/GDP ratio than did energy intensity changes. What led structural changes to overtake intensity as the predominant factor? One obvious response is that lower energy prices (at least until 1999) finally took their toll on manufacturing energy intensities and auto fuel intensity, resulting in slower energy savings in the US economy. At the same time, saturation of car use or even total travel may be appearing, i.e., further growth in GDP does not generate the same increment of car use or flying as it did in the past. Part of this phenomenon may be related to a lag between income growth and increased travel. However, the gap between GDP and vkm increased even further in 1999 (DOT, 2000). The same relationship may be true for purchases of some large household appliances and saturation of trucking for freight haulage. To what extent are these developments related to the “information economy”, sometimes referred to more narrowly as the “internet economy”? To be sure, information and electronics technologies played a strong role in the growth of US manufacturing, reducing demand for energy services per value added in the manufacturing sector. Additionally, as Romm et al. (1999) have pointed out, strong anecdotal evidence shows how the internet is leading to energy saving in many sectors. A more detailed study of factors of productivity would be necessary to address the total contribution of IT to reducing industrial or service-related energy use relative to value added. However, at the level of disaggregation we have studied we do not see increased rates of decline in subsectoral energy intensities. In this paper, we cannot quantify the extent to which the decline in E/GDP is related to the information economy. The only sure part of the answer is that the spurt of manufacturing value added in the mid- to late 1990s was clearly driven by IT production. But whether what is produced is being distributed, sold, and consumed on less energy because of the information economy cannot be determined yet. For example, there is no evidence that the lag in automobile use with respect to GDP was caused by the internet. Thus, there is still no hard evidence showing how it affects the use of personal vehicles, freight patterns, or energy use in the service sector, at least not on a large enough scale to markedly affect our indicators. On the other hand, it is also clear that computers, computer accessories, and the internet itself now consume a small but significant share of the nation's electricity. An authoritative estimate by Kawamoto et al. (2001) put the share of electricity for computers, peripherals, and the internet at around 2–3% of the total in the late 1990s. We concur, since a substantially larger share would imply an increase in electricity consumption that has not been seen.