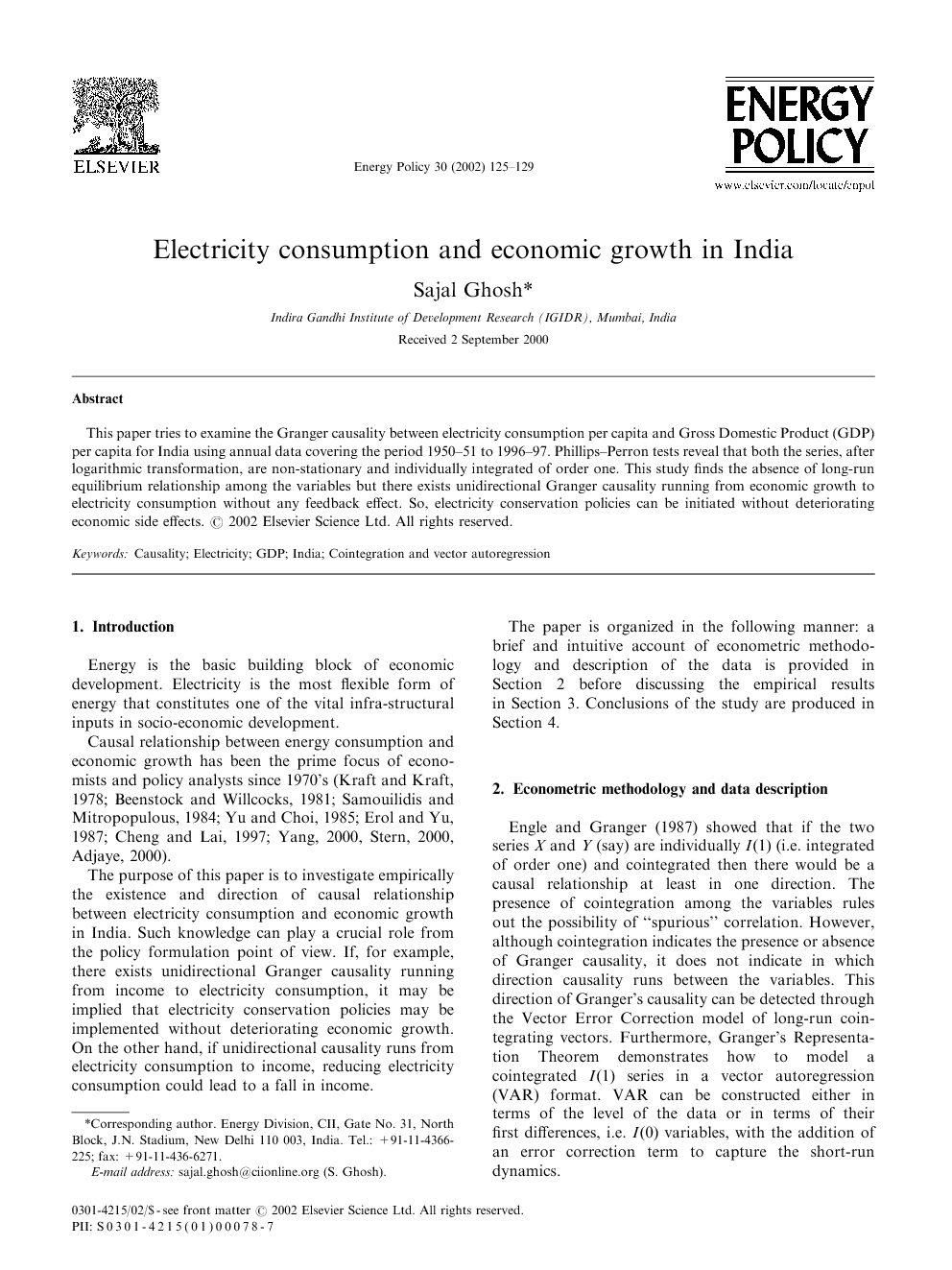 This paper tries to examine the Granger causality between electricity consumption per capita and Gross Domestic Product (GDP) per capita for India using annual data covering the period 1950–51 to 1996–97. Phillips–Perron tests reveal that both the series, after logarithmic transformation, are non-stationary and individually integrated of order one. This study finds the absence of long-run equilibrium relationship among the variables but there exists unidirectional Granger causality running from economic growth to electricity consumption without any feedback effect. So, electricity conservation policies can be initiated without deteriorating economic side effects.

Energy is the basic building block of economic development. Electricity is the most flexible form of energy that constitutes one of the vital infra-structural inputs in socio-economic development. Causal relationship between energy consumption and economic growth has been the prime focus of economists and policy analysts since 1970's (Kraft and Kraft, 1978; Beenstock and Willcocks, 1981; Samouilidis and Mitropopulous, 1984; Yu and Choi, 1985; Erol and Yu, 1987; Cheng and Lai, 1997; Yang, 2000, Stern, 2000, Adjaye, 2000). The purpose of this paper is to investigate empirically the existence and direction of causal relationship between electricity consumption and economic growth in India. Such knowledge can play a crucial role from the policy formulation point of view. If, for example, there exists unidirectional Granger causality running from income to electricity consumption, it may be implied that electricity conservation policies may be implemented without deteriorating economic growth. On the other hand, if unidirectional causality runs from electricity consumption to income, reducing electricity consumption could lead to a fall in income. The paper is organized in the following manner: a brief and intuitive account of econometric methodology and description of the data is provided in Section 2 before discussing the empirical results in Section 3. Conclusions of the study are produced in Section 4.

India is a populous country accounting nearly one-sixth of the world's population. The Indian economy has grown by about 4.5% per annum on a long-term basis in the second half of the twentieth century whereas the installed power generation capacity and generation has increased at the rate of 9% and 10% per annum compounded, respectively. The demand for electricity has been growing at a compound annual rate of growth (CARG) of nearly 8% (Das et al., 1999). This paper has investigated the existence and direction of Granger causality between electricity consumption and economic growth in India using the annual data covering the period 1950–51 to 1996–97. Empirical results have established the existence of Granger causality running from economic growth to electricity consumption without any feedback effect. Thus, a growth in income is responsible for a high level of electricity consumption. This result can be interpreted as follows. With the advancement of Indian economy, there has been inter-fuel substitution from conventional fuel like coal, firewood and oil to electricity in various sectors. Households, because of their higher disposable income, have become more and more dependent on the electric gadgets for recreation and comfort. Economic growth causes expansion in the industrial and commercial sectors where electricity has been used as basic energy input because of its clean and efficient nature. Electricity consumption in agricultural and transport sector has also accelerated to keep pace with country's economic growth. In the agricultural sector, pumps have been energized electrically for irrigation purpose since independence. As on 31st March 1997, the total number of pumpsets/tubewells energized were 11565342 (Public Electricity Supply, All India Statistics, 1996–97). Electricity consumption in transport sector (railway in particular) has been increased at an annual growth rate of 15% between the period 1970–1995. Under such circumstances, one could reasonably expect that economic growth enhances electricity consumption in India. Indian electricity sector has been suffering from chronic supply shortage, high T&D losses of about 25–20 per cent against the world's average of 6–9 per cent mainly because of power theft, high auxiliary consumption and environmental problems associated with the coal based power plants. Due to irrational tariff structure, most of the State Electricity Boards (SEBs) in India have been suffering from poor operational and financial performances. Lower electricity tariffs in the agricultural and domestic sector, which have been cross-subsidized by industrial sector, encourage the consumers for wasteful use of electricity. According to the projection made by Central Electricity Authority, India need another 100,000 MW install capacity in the next 10–12 years to bridge its future demand–supply gap. Government of India (GOI) has already started electricity sector reform aimed at corporatization of SEBs and rationalization of the tariff structure to make them independent profit centers. GOI is also planing to initiate a major energy conservation and efficiency improvement program as a part of the ongoing reform process because of high energy saving potentials in India. While energy conservation aims at reducing the need for energy without reducing the end use benefit, it provides a range of personal as well as social rewards also. First, conservation is cheaper than production. For example, 1 MW of power generation costs as much as 3–4 crores whereas same power can be saved with less investment. Second, electricity conservation avoids the environmental costs associated with the additional power generation. In this situation, the existence of unidirectional causality running from economic growth to electricity consumption in India has serious policy implications for decision-makers as electricity conservation policies through rationalizing the tariff structure, efficiency improvement and demand side management, which aim at curtailment of wastage of electricity and there by reduce the electricity consumption without affecting the end-use benefits, can be initiated with no damaging impact on India's economic growth.