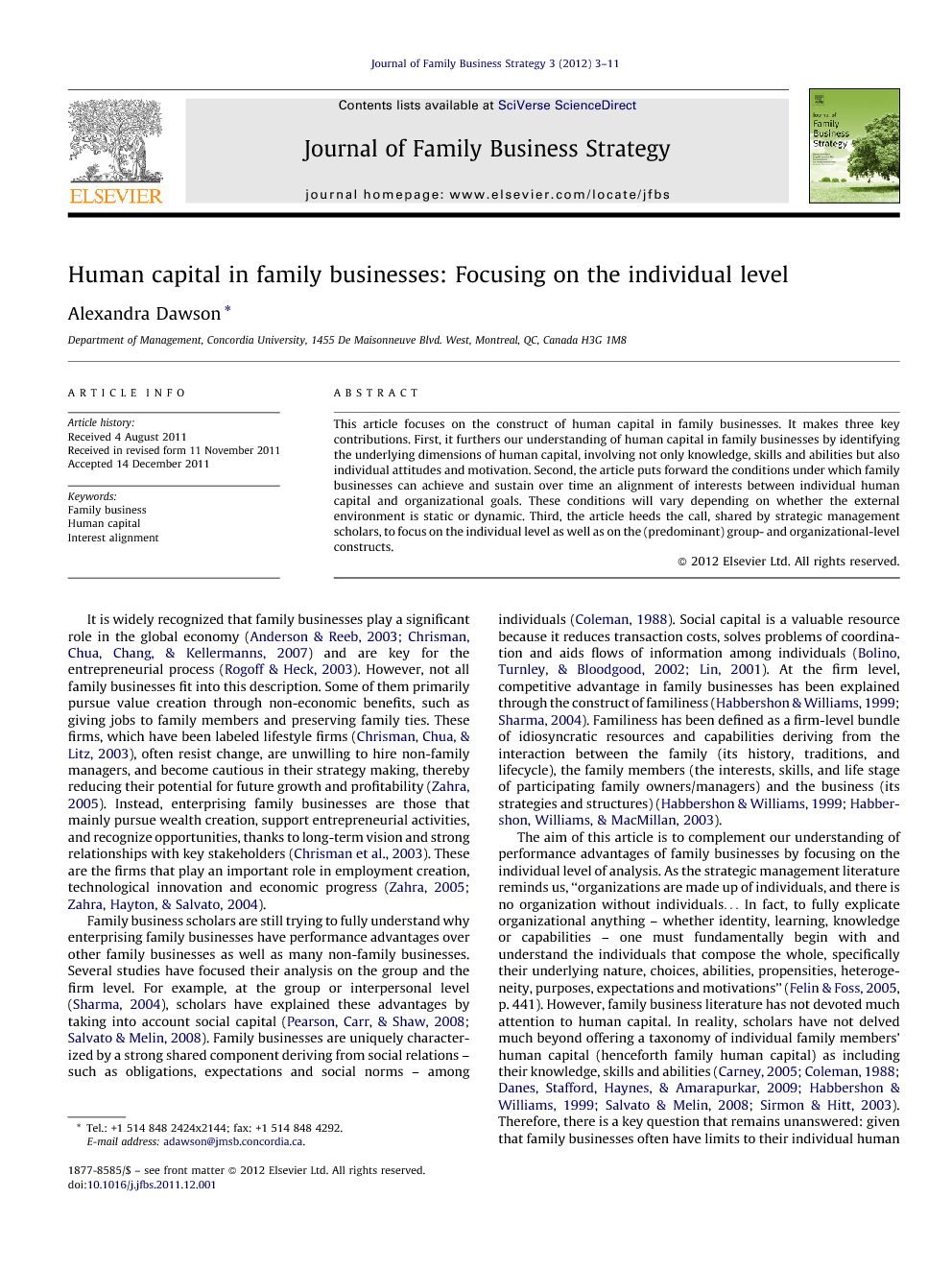 This article focuses on the construct of human capital in family businesses. It makes three key contributions. First, it furthers our understanding of human capital in family businesses by identifying the underlying dimensions of human capital, involving not only knowledge, skills and abilities but also individual attitudes and motivation. Second, the article puts forward the conditions under which family businesses can achieve and sustain over time an alignment of interests between individual human capital and organizational goals. These conditions will vary depending on whether the external environment is static or dynamic. Third, the article heeds the call, shared by strategic management scholars, to focus on the individual level as well as on the (predominant) group- and organizational-level constructs.

The development of human capital theory started in the 1960s, when Theodore Schultz (who was later, in 1979, awarded the Nobel prize in economic sciences) introduced the idea that “skills and knowledge are a form of capital” (1961, p. 1). Although Adam Smith had already, in the 18th century, referred to individual abilities as forming part of a country's capital, Schultz was the first to argue formally against the predominant values and beliefs, which had held scholars back from “looking upon human beings as capital goods” and as “wealth that can be augmented by investment” such as education and training (1961, p. 2). Schultz also highlighted a connection between human capital and economic growth, by associating investments aimed at enhancing “human capabilities to do productive work” with an increase in their productivity (1961, p. 8). Another instrumental figure for human capital theory was Gary Becker, also an economist and winner of the 1992 Nobel prize in economic sciences. Becker expanded the definition and theory of human capital and focused on investments in human capital, that is, the “activities that influence future real income through the imbedding of resources in people.” These included “schooling, on-the-job training, medical care, vitamin consumption, and acquiring information about the economic system” (1962, p. 9). Schultz (1961) identified similar antecedents to human capital, including health facilities and services (aimed at improving life expectancy, as well as individuals’ strength and vitality), on-the-job training, formal and continuing education, as well as migration. Later studies have emphasized the importance of organizational culture as another key antecedent of human capital. For example, some organizational cultures are oriented towards promoting learning, thus contributing to generating a sustainable competitive advantage (Barney, 1986, DeLong and Fahey, 2000 and Zahra et al., 2004). An externally focused organizational culture is likely to encourage its individuals to acquire knowledge from a variety of external sources, such as customers, competitors and suppliers, thus increasing the firm's entrepreneurial activities (Kanter, 1983 and Zahra et al., 2004). In family businesses, an organizational culture that is based on nepotism – the frequently followed practice of hiring relatives (Vinton, 1998) – may have an effect on a firm's human capital, either positively through the value of upholding the family's tradition and allowing future owner/managers to get to know the business intimately by growing up around it (Bellow, 2004) or negatively through the creation of agency problems, caused by privileges and a sense of entitlement, which are costly to mitigate (Gersick et al., 1997 and Schulze et al., 2003). This paper is focused on the human capital of family members in family businesses. This resource is distinctive for several reasons. For example, it is developed through learning-by-doing and apprenticeships that differ from those available in non-family firms because they are often provided by other family members at home, through summer jobs, and so on (Le Breton-Miller and Miller, 2006 and Memili et al., 2011). This allows for the development of tacit and highly specific knowledge, which is not easily transferable (Sirmon & Hitt, 2003). Furthermore, the human capital of family members in family businesses is unique because, unlike non-family members, family members are often willing to work without pay (Danes et al., 2009). Generally family members have greater commitment and cooperation than non-family employees, especially if the latter perceive the decision-making processes and outcomes as being unfair or unjust (Barnett & Kellermanns, 2006). This may be caused by uncertainties due to the fact that non-family members are part of the business but not of the family system (Mitchell, Morse, & Sharma, 2003). Family human capital is defined in the literature as the knowledge, skills and abilities of individual family members (Carney, 2005, Coleman, 1988, Danes et al., 2009, Habbershon and Williams, 1999, Salvato and Melin, 2008 and Sirmon and Hitt, 2003). Stocks of family human capital represent a potential resource advantage for the firm (Sorenson & Bierman, 2009). By being made available to the family and the business, these flexible resources can flow where needed (Sharma, 2008), contributing to firm success as well as to the quality of life of family members (Rothausen, 2009 and Stafford and Tews, 2009). Human capital theory suggests that there is a correlation between human capital and organizational performance, which can benefit from the accumulation of firm-specific, valuable human capital (Danes et al., 2009 and Strober, 1990). According to the resource-based view, human capital is the most valuable and difficult type of resource to imitate because it is, to a large degree, the product of complex social structures that have been built over time (Barney, 1991). Thanks to their shared histories and close-knit relationships, spanning across two subsystems (family and business), individual family members are, by their very idiosyncratic nature, characterized by being not only valuable and rare but also difficult to imitate and non-substitutable (Barney, 1991 and Sirmon and Hitt, 2003). Thus, family human capital is most likely to be a source of sustained competitive advantage for firms (Barney, 2001). In fact, human capital is considered one of the most important resources for family businesses, allowing them to enhance their value for current and future generations (Sirmon & Hitt, 2003). The closeness of the family/business relationship creates a unique context for human capital (both positive and negative), compared to non-family firms (Sirmon & Hitt, 2003). Human capital is also considered to be a crucial resource by outside investors considering whether to provide finance to or invest in family businesses (Dawson, 2011).

Successful family businesses are often characterized by distinctive characteristics and strategies (Astrachan, 2010), which are due to family involvement in ownership, governance and management (Klein, Astrachan, & Smyrnios, 2005). Several scholars have directed their attention to the distinct social capital of family businesses. This article has focused on the under-researched individual level, by arguing that family businesses also benefit from their human capital and that, without individuals, there can be no social aspect. The knowledge, skills and abilities of family members (head and hand) may be inferior to those of non-family members, with the exception of family members’ tacit knowledge that is specific to the firm, its history and objectives. However, family businesses frequently benefit from a third dimension of human capital, relating to what has been termed here as heart. Such advantage is exemplified by family members’ enhanced willingness to exhibit productive behavior. Greater interest alignment can lead to the creation of competitive advantage, which can be sustained through isolating mechanisms based on inimitability or adaptability, depending on the nature of the competitive environment. 5.1. Limitations and future research This article has limitations. First, because I have focused on the performance effects of interest alignment between individuals and their family firms, I have made the assumption that all other determinants of firm performance are held constant (Gottschalg & Zollo, 2007). Second, I have considered human capital as a standalone resource for family businesses, whereas it clearly has deep links with their social capital. Social capital is considered to complement human capital by providing it with a context (Burt, 2000). Human and social (as well as economic) capital often interact synergistically and have a positive impact on firm performance (Pieper and Klein, 2007, Rothausen, 2009 and Zellweger and Nason, 2008). Social capital can influence the creation of human capital in subsequent generations: for example, genetics inherited by the next generation may be irrelevant if strong social capital is not present to facilitate effective child development (Coleman, 1988 and Sirmon and Hitt, 2003). In terms of their consequences, human and social capital are complementary, because returns to intelligence, education and experience (human capital) are, in some part, associated with an individual's position in the social structure of a firm (Burt, 1997). Several other scholars have noted that assuming that individuals are atomistic and isolated may hinder us from understanding important social, institutional, and organizational processes (e.g., Spender, 1996). Training may create a highly productive workforce; however, path dependence, in which the benefits of training accumulate over time, and the resulting bundles of routines are also crucial drivers of performance that are so difficult to recognize and imitate (Nelson & Winter, 1982). Although I recognize that social entities such as family businesses are best understood as holistic systems, and not just as aggregations of interrelated constituents, the key concern at this stage is to clarify the definition and dimensions of family human capital. Thus, the next step in future research would be to test the propositions that are proposed herein. Further research efforts can then move on to analyzing the relations with other components such as social capital and the organic nature of the family business (as suggested, e.g., by Stafford, Duncan, Dane, and Winter (1999) with their sustainable family business research model). Once each component, and its dimensions, has been clearly defined and operationalized, future research can focus on developing a multilevel model, aimed at explaining how individual behavior (micro level) and social dynamics (group level) may explain organizational-level outcomes (Hitt, Beamish, Jackson, & Mathieu, 2007). This approach would differ from previous research, which has generally considered family business constructs at the organizational level (Habbershon and Williams, 1999 and Pearson et al., 2008), and would better reflect the multiple levels of analysis that characterize family businesses (Pieper & Klein, 2007). In turn, multilevel analysis can contribute to our scholarly understanding of nested nature of family businesses as complex systems with multifaceted individual and social factors (Hitt et al., 2007). Family firm practitioners may find the insights presented here on interest-alignment levers – in static and dynamic environments – to be particularly useful for addressing the challenges that family firms face in achieving competitive advantage.