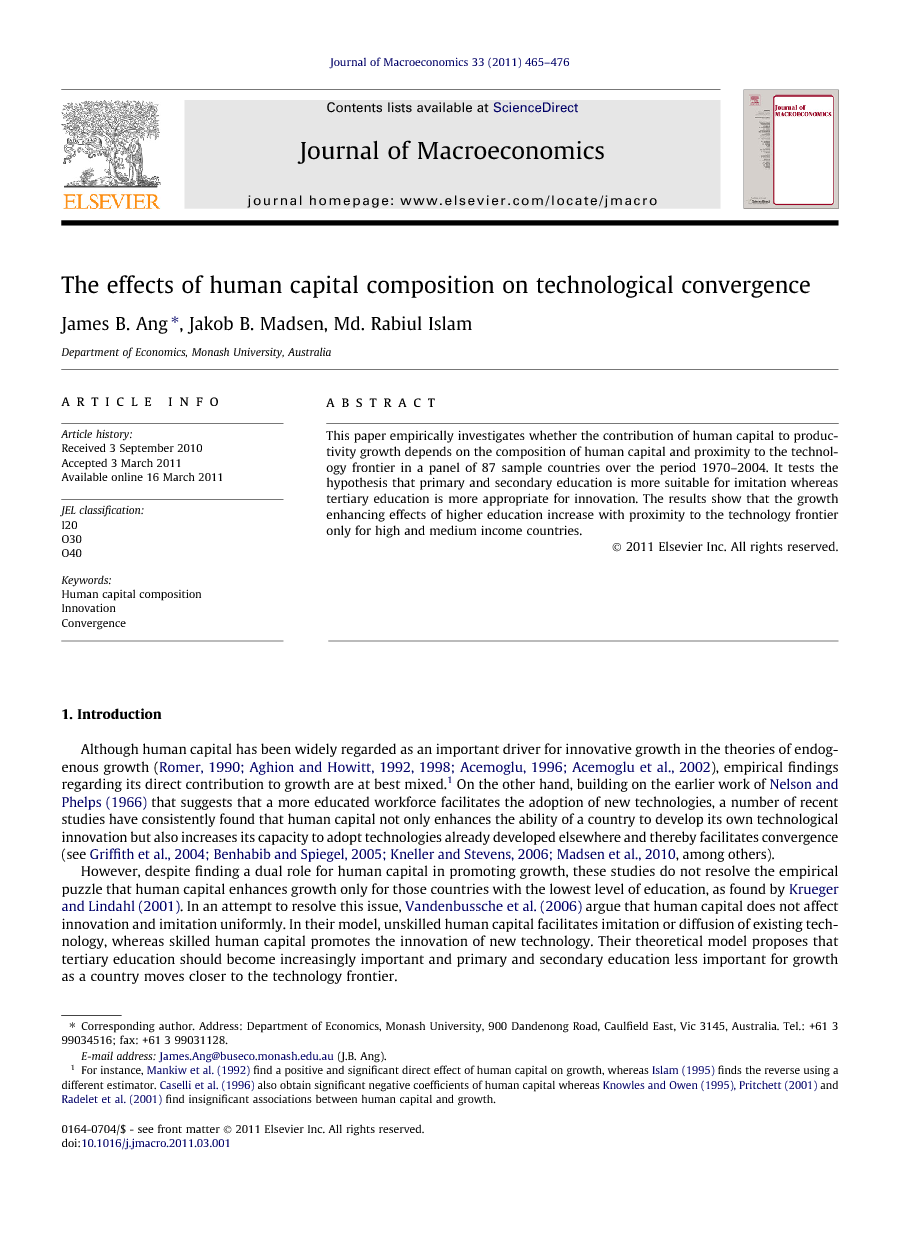 This paper empirically investigates whether the contribution of human capital to productivity growth depends on the composition of human capital and proximity to the technology frontier in a panel of 87 sample countries over the period 1970–2004. It tests the hypothesis that primary and secondary education is more suitable for imitation whereas tertiary education is more appropriate for innovation. The results show that the growth enhancing effects of higher education increase with proximity to the technology frontier only for high and medium income countries.

Although human capital has been widely regarded as an important driver for innovative growth in the theories of endogenous growth (Romer, 1990, Aghion and Howitt, 1992, Aghion and Howitt, 1998, Acemoglu, 1996 and Acemoglu et al., 2002), empirical findings regarding its direct contribution to growth are at best mixed.1 On the other hand, building on the earlier work of Nelson and Phelps (1966) that suggests that a more educated workforce facilitates the adoption of new technologies, a number of recent studies have consistently found that human capital not only enhances the ability of a country to develop its own technological innovation but also increases its capacity to adopt technologies already developed elsewhere and thereby facilitates convergence (see Griffith et al., 2004, Benhabib and Spiegel, 2005, Kneller and Stevens, 2006 and Madsen et al., 2010, among others). However, despite finding a dual role for human capital in promoting growth, these studies do not resolve the empirical puzzle that human capital enhances growth only for those countries with the lowest level of education, as found by Krueger and Lindahl (2001). In an attempt to resolve this issue, Vandenbussche et al. (2006) argue that human capital does not affect innovation and imitation uniformly. In their model, unskilled human capital facilitates imitation or diffusion of existing technology, whereas skilled human capital promotes the innovation of new technology. Their theoretical model proposes that tertiary education should become increasingly important and primary and secondary education less important for growth as a country moves closer to the technology frontier. Using aggregate data for 19 OECD countries over the period 1960–2000 and state level data for the US, the empirical analyses of Vandenbussche et al. (2006), henceforth VAM, and Aghion et al. (2009) find evidence in favor of the predictions of VAM’s model. However, whether these predictions are valid for medium and low income developing countries remains untested. There are three reasons why it is important to test their hypothesis for developing countries. First, the VAM model so far has only been tested for high income countries. The sample countries typically have the highest levels of human capital accumulation in the world. Second, knowledge of the social returns to different categories of education is important from a budgetary perspective. If developing countries are mainly technology followers and thereby absorb foreign technologies by adapting them to local conditions and applying them to alternative uses, the social returns to lower skilled workers exceed those of higher skilled workers. Conversely, if human capital predominantly fosters technological innovations in developed countries and thereby generates income growth by making capital and labor more productive, the social returns to highly skilled workers may exceed those of lower skilled workers (Aghion et al., 2009). This suggests that the way human capital composition affects growth may vary depending on the developmental stage of a country, and therefore highlights the importance of segregating the sample into different income groups. Third, Caselli and Coleman (2006) argue that skilled and unskilled workers are imperfect substitutes and that the skill premium differs substantially between developed and developing countries. If this is the case, the sample of developing countries will give insight into the general validity of the model of VAM. This paper contributes to the growth and development literature in three respects. First, the hypothesis of VAM is tested for low income, middle income and high income countries. Second, in addition to utilizing the widely used human capital datasets of Barro and Lee (2001), we also use the new educational datasets compiled by Cohen and Soto, 2007 and Lutz et al., 2007. Third, only a few studies, if any, have made a cross-country analysis of the growth effects of human capital for various educational groups. A priory there is no reason why the growth effects of different categories of human capital are the same or that the social returns to human capital for different educational groups are the same as the private returns, as is often assumed when different educational groups are combined together in macroeconomic studies. The next section establishes the empirical framework and Section 3 explains the data and construction of variables. The analysis is conducted based on a large panel of 87 countries (including 28 high, 37 middle and 22 low income countries) over the period 1970–2004 using the system GMM method. Section 4 presents the results and the last section concludes.

Human capital is generally regarded as an important driver for economic growth, although the empirical evidence so far is mixed. Some argue that human capital should enter the production function as an input which thereby affects output directly while others argue that human capital contributes to higher technological progress by facilitating innovation, diffusion and adoption of new technologies and thus affects productivity growth indirectly. It is also plausible that different types and levels of human capital may have different effects on growth. Considering that technological progress is a dual mechanism comprising innovation and imitation and that primary and secondary education are more suitable for imitation, whereas higher education is more appropriate for innovation, this study has investigated whether the contribution of human capital to productivity growth depends on the composition of human capital and proximity to the technology frontier in a panel of 87 sample countries over the period from 1970 to 2004. It used different levels of educational attainment based on several education datasets and also examined the effects of human capital composition on growth across gender. The results show that the growth enhancing effects of tertiary education attainment or skilled human capital increase when high and medium income countries move closer to the technology frontier. In other words, those economies that concentrate more on innovation than imitation and thus invest more in higher education are able to accelerate TFP growth as their technological gap narrows. On the other hand, human capital is not contributing to growth in low income countries, suggesting that they neither innovate nor imitate. That human capital is unimportant for growth in developing countries is likely to reflect a low quality of teaching and that schools are badly resourced. The students are often absent, physically and mentally, from the classes due to a high burden of disease (Sachs, 2001). Finally, there is evidence of technology convergence independent of human capital in low income countries, implying that being far from the frontier allows one to experience faster TFP growth. The findings of this study have some important policy implications for high, medium and low income countries. High and medium income countries – those that invest more in tertiary education – will continue to grow as they move closer to the frontier. These results support the model of Vandenbussche et al. (2006) in which growth is driven by innovations by highly educated people. Low income countries, by contrast, have only low growth prospects because growth is independent of educational attainment. Thus, the growth prospects in these countries are likely to remain low because the only source of growth is the distance to the technology frontier.