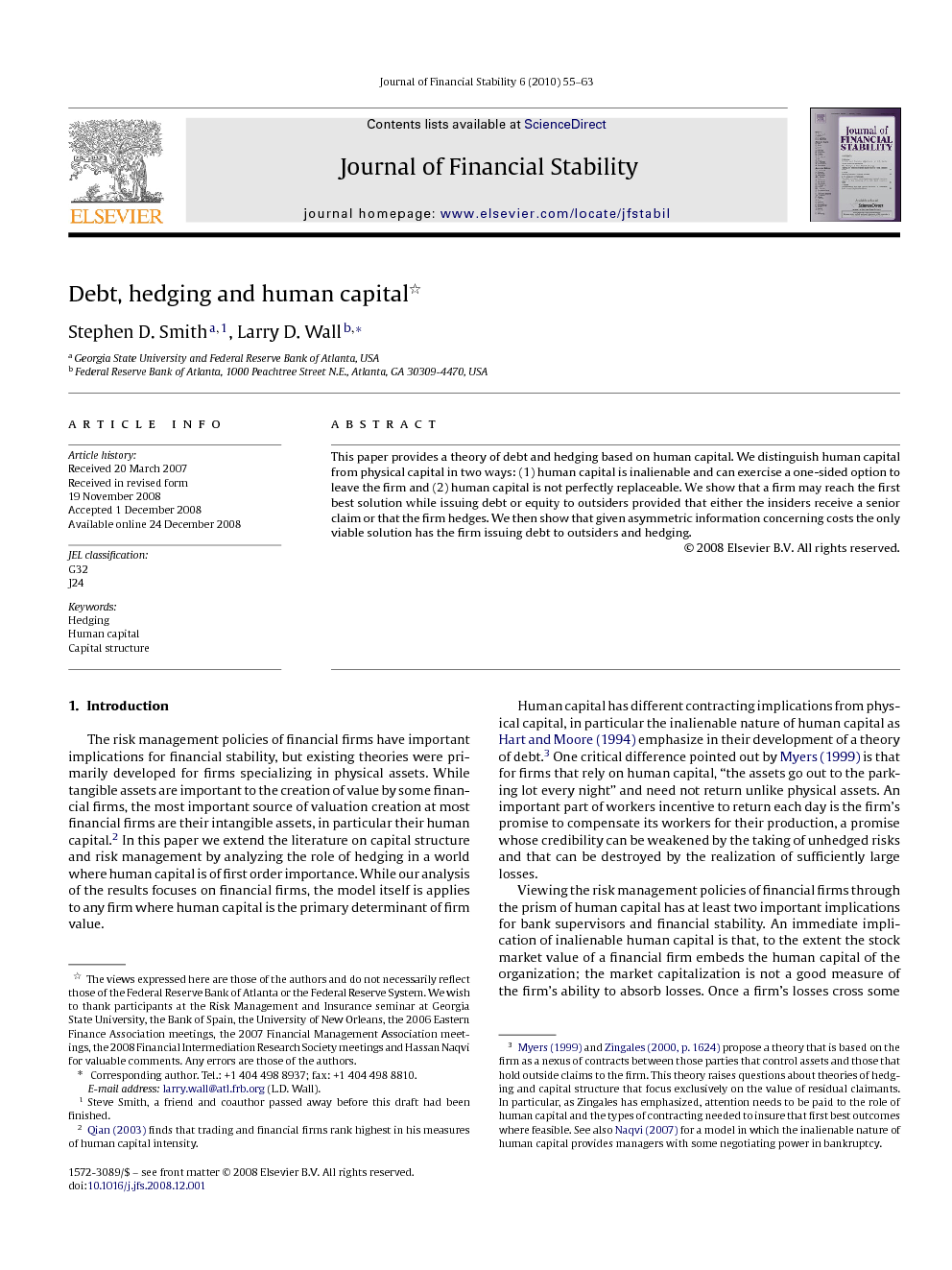 The risk management policies of financial firms have important implications for financial stability, but existing theories were primarily developed for firms specializing in physical assets. While tangible assets are important to the creation of value by some financial firms, the most important source of valuation creation at most financial firms are their intangible assets, in particular their human capital.2 In this paper we extend the literature on capital structure and risk management by analyzing the role of hedging in a world where human capital is of first order importance. While our analysis of the results focuses on financial firms, the model itself is applies to any firm where human capital is the primary determinant of firm value. Human capital has different contracting implications from physical capital, in particular the inalienable nature of human capital as Hart and Moore (1994) emphasize in their development of a theory of debt.3 One critical difference pointed out by Myers (1999) is that for firms that rely on human capital, “the assets go out to the parking lot every night” and need not return unlike physical assets. An important part of workers incentive to return each day is the firm's promise to compensate its workers for their production, a promise whose credibility can be weakened by the taking of unhedged risks and that can be destroyed by the realization of sufficiently large losses. Viewing the risk management policies of financial firms through the prism of human capital has at least two important implications for bank supervisors and financial stability. An immediate implication of inalienable human capital is that, to the extent the stock market value of a financial firm embeds the human capital of the organization; the market capitalization is not a good measure of the firm's ability to absorb losses. Once a firm's losses cross some threshold and its ability to provide appropriate compensation is in doubt, the firm's human capital has an incentive to provide their talents to another firm. Nevertheless, our model suggests that prudential supervisors are wise to monitor the market capital of a financial firm, especially its relationship to the economic (or fair) value of its net assets. A firm's incentive to carefully manage its risks in a variety of ways including hedging increases with its human capital. The remainder of the paper is as follows. Section 2 provides more intuition about the model and its relationship to the existing literature. Section 3 describes the model setup and assumptions. In Section 4 we look at the hedge/no hedge decision with symmetric information, while in Section 5 we model the problem as one of asymmetric information between managers and outside claimants. Section 6 contains some brief concluding remarks and some empirical implications one might draw from the model.

In this paper we derive the possible value added of hedging for firms in an equilibrium model with labor market frictions. Specifically, we assume that human capital is inalienable, managers have valuable exit options and that managers are not perfectly replaceable. In the case of symmetric information we show that a fixed salary along with outside debt or equity can yield the same first best allocation that can be obtained by hedging without a fixed salary. Conversely, we show that, in equilibrium, firms will find it value enhancing to hedge and issue outside debt if there is asymmetric information between managers and outsiders. This is the unique solution to the problem. Issuing outside equity and hedging will not solve this problem since it is not possible to make residual claims riskless, which is needed to achieve the first best allocations. Our model has a number of empirical implications. When looking across industries our model suggests that firms that rely on highly talented professionals, such as financial firms, to generate their earnings should hedge more than other firms even though financial firms have relatively small amounts of fixed capital and most of this capital may be used in other industries. Similarly, our model would suggest that firms that rely on valuable R&D employees should find it more beneficial to hedge than other firms. More generally, if growth opportunities are more human capital intensive than assets in place, we should find that firms with more growth opportunities should hedge more (see for example, Gay and Nam, 1998). Our model also emphasizes the role of managers’ and employees’ outside options in determining the importance of hedging. Managers and employees whose value outside the firm is almost the same as their value remaining with the firm are likely to be particularly sensitive to unhedged losses. Here again, most senior employees at financial firms would be almost as valuable at their next best employer and financial firms tend to be concentrated in locations where moving between jobs is relatively low cost. Our results are also consistent with the idea that, to the extent that managers at large firms have more valuable outside exit options, large firms hedge relatively more than smaller firms. This same idea implies that managers with higher compensation should hedge more to the extent that compensation is the shadow price of outside options. Further, we note that firms that are more profitable should hedge less and have less debt since cash flows are already close to riskless if they can use internal capital. Thus, our theory suggests a reason why profitable firms both hedge less and hold less debt, a fact that Myers (2001) argues is not explainable by either the tradeoff theory of capital structure or the pecking order theory. Finally, it is the case that our theory implies that firms with higher debt levels should hedge more (see, e.g., Smith and Lin (2003)).14 In contrast, managers and employees in some firms may find their outside options relatively less valuable for a variety of reasons including a large fraction of their human capital is firm specific, the value of their outputs is heavily dependent on other inputs from the firm or the firm operates in a legal or cultural environment that reduces job mobility. Mobility is also reduced to the extent that all of the firms in an industry are hit by a common, unhedged shock that reduces their profitability. Firms whose employees outside employment options are not very valuable will be less likely to hedge. While our model has implications for which types of firms that hedge, it also has a unique implication for the organizational structure of financial firms. In particular, it may help to explain the existence of some types of hedge funds even though investment banks could take similar positions in their proprietary trading operations.15 Investment banks include operations such as market making and proprietary trading that involve hedgeable risks as well as operations that do not generate hedgeable exposures such as mergers and acquisition advisory services. Thus, we would expect investment banks to limit their trading risks through hedging and other risk management tools such as strictly enforced position limits. However, some analysts and traders may have special expertise in evaluating trends and predicting large directional moves in financial market prices (such as exchange rates). The risk management limits imposed by investment banks to help retain their human capital in other areas may preclude these analysts and traders from fully exploiting the value of their information and insights. One way to avoid these limits would be for those analysts and traders with skills in directional bets to move to hedge funds, where the adverse compensation consequences of unhedged losses could be limited to those actually developing and implementing the directional bet.