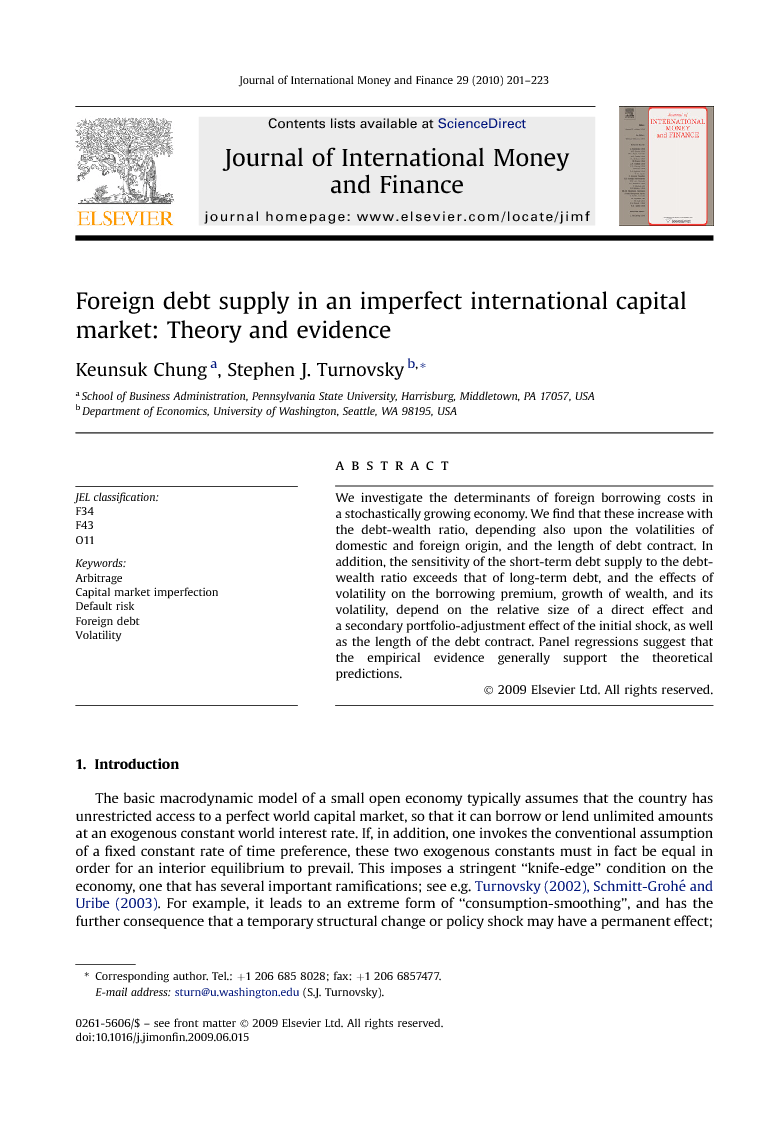 We investigate the determinants of foreign borrowing costs in a stochastically growing economy. We find that these increase with the debt-wealth ratio, depending also upon the volatilities of domestic and foreign origin, and the length of debt contract. In addition, the sensitivity of the short-term debt supply to the debt-wealth ratio exceeds that of long-term debt, and the effects of volatility on the borrowing premium, growth of wealth, and its volatility, depend on the relative size of a direct effect and a secondary portfolio-adjustment effect of the initial shock, as well as the length of the debt contract. Panel regressions suggest that the empirical evidence generally support the theoretical predictions.

The fact that developing economies are subject to default-risk and hence have limited access to the international credit market is an issue of great concern to both researchers and policymakers. Macrodynamic models have tended to incorporate this fact by assuming that such economies face an upward sloping supply of debt, whereby their borrowing costs increase with their debt position. While this formulation has appeal as a plausible reduced form equilibrium relationship, it is essentially ad hoc. In this paper we have developed a model of foreign debt supply, which incorporates the rational behavior of participants in the foreign debt market, in light of the risks they face. Using this framework we derive the foreign-debt supply curve as an upward sloping function of the relative size of debt, measured by debt-wealth ratio. In addition, the foreign-debt supply curve is characterized by the volatility of domestic output growth (internal volatility) and the volatility of bond prices (external volatility), together with their interaction with the debt-wealth ratio. Second, the borrowing premium depends upon the length of the debt contract, with the curvature of the foreign debt supply curve varying inversely with its length. Third, the external source of volatility exerts a larger effect on the agent's portfolio/consumption decision and his welfare than does internal volatility. The growth rate of wealth and its volatility can either increase or decrease, depending on the direct effect of a shock and the indirect portfolio adjustment effect. Using an unbalanced panel of 20 countries over 40 quarters, we find evidence that both the short-term and the long-term interest premia are positively related with the relative size of debt, measured by debt-GDP ratio. Furthermore, we find that the short-term debt supply curve is more inelastic than the long-term curve in the reasonable range of debt size. Also, we examine the effects of a change in domestic and external risk on the short-term and the long-term interest premia. We find that the real exchange rate volatility has a strong, positive effect on the interest premia in all specifications in our regressions, while the effect of the domestic output volatility is weaker. We also find that an increasing volatility may affect the slope of the debt supply curve as well as its position by interacting with the relative debt size. Overall, we find that this empirical evidence offers encouraging support for the underlying theoretical model.