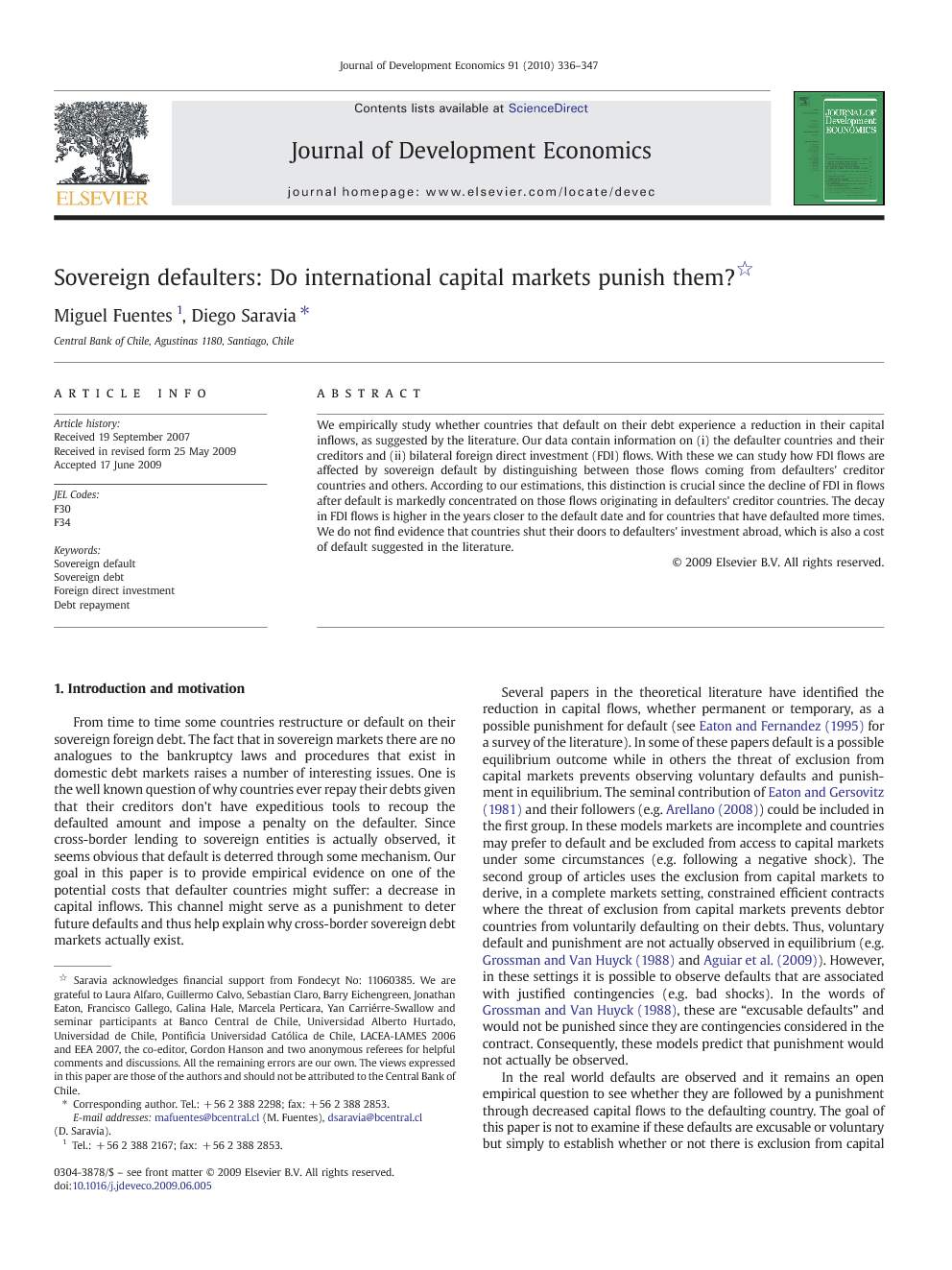 We empirically study whether countries that default on their debt experience a reduction in their capital inflows, as suggested by the literature. Our data contain information on (i) the defaulter countries and their creditors and (ii) bilateral foreign direct investment (FDI) flows. With these we can study how FDI flows are affected by sovereign default by distinguishing between those flows coming from defaulters' creditor countries and others. According to our estimations, this distinction is crucial since the decline of FDI in flows after default is markedly concentrated on those flows originating in defaulters' creditor countries. The decay in FDI flows is higher in the years closer to the default date and for countries that have defaulted more times. We do not find evidence that countries shut their doors to defaulters' investment abroad, which is also a cost of default suggested in the literature.

Sometimes countries have financial difficulties and they restructure or default on their debts. Since sovereign default is by no means the norm in international capital markets, the unilateral interruption of debt payments probably carries some cost to the defaulting country. Several possible default costs have been identified by commentators and the literature. Of these, exclusion from capital markets is arguably the most cited, and is the punishment for default we test empirically in this paper. We extend previous research in this area by focusing on the borrower–lender relationship, characteristics of defaults and the analysis of some characteristics that would influence countries' reputation as good payers. In our study we focused on FDI flows, which have become a very important source of capital to developing countries. The data on FDI flows and sovereign debt renegotiation that we use identifies the FDI source and recipient countries as well as the countries involved in the renegotiation (i.e. debtor and creditors seeing their claims renegotiated). This is a key feature of the data which allows for the identification of a true punishment to defaulters, since we can distinguish between the impact of default on FDI flows coming from countries directly involved in the renegotiation, and from those not directly affected by the default. Our findings indicate that the reduction in FDI inflows does not originate from every country that could be a potential source of funds but only from those directly involved in the renegotiation. This evidence suggests that the punishment that follows a sovereign default is not universal since it appears to be confined to those countries whose debt claims were defaulted on. We think that this finding is in favor of the hypothesis that the reduction is indeed the consequence of a default and not driven by other forces such as a negative shock to the economy. This suggests that the decline in FDI inflows constitutes a punishment to the defaulter. We find that the contemporaneous effect of a default on FDI inflows is equivalent to not signing a trade treaty. Using other findings in the literature, we also estimate that the contemporaneous effect of default is a reduction of 0.4 percentage points in the growth rate of GDP (doubled if there was another default in the previous years). Evaluating if this magnitude is big enough to constitute a relevant punishment is an interesting avenue for future research. We analyze if the size of the debts renegotiated affects the punishment and find that the answer seems to be that this is the case. Next, with the objective of identifying another element of the nature of the punishment, we test whether a defaulter's investments abroad are reduced after a default, as suggested by some theoretical contributions. We do not find any evidence in favor of that hypothesis. We also identify some defaulters' characteristics that are likely to affect their reputation to see if they are indeed important determinants of countries' capital inflows. First, we inquire to what extent countries with a large default record have a worse reputation and thus receive less capital flows than countries with relatively better repayment performance. Then we study some dynamic aspects of punishments to defaulters like whether they have a temporary component and the speed to which defaulters are forgiven by their creditors.29 Our empirical findings point in the same direction: the higher the number of defaults, the lower the capital flows to that country and, furthermore, the punishment for default vanishes over time. Overall, we find support for the existence of a punishment used against defaulting countries. We leave the related question of whether this cost of default effectively influences the decision to default for future research. Appendix A. Data Appendix Foreign direct investment flows The FDI flows are taken from the OECD's International Direct Investment Statistics Yearbook 1980–2003. Each bilateral flow is in millions of US dollars and is normalized by the host's country nominal GDP in dollars taken from the World Bank's World Development Indicators (WDI) database available in http://sima-ext.worldbank.org/query/ and expressed in percentage points in the regressions. Countries in the OECD report both outflows and inflows of FDI observed each year among them and all the countries detailed Table 2. Therefore, for the countries in the OECD there are two potential sources for the same bilateral FDI flow that country i sends to country j: (i) The outflow reported by country i to country j and (ii) the inflow reported by country j from country i. Theoretically both magnitudes should be identical but differences in each country's reporting standards will usually imply that they differ in practices. We assume that the inflow data is more likely to reflect the “true” identity of the source country. Given this, we will measure the FDI inflow from country i to country j as the one inflow reported by country j from country i whenever possible. On the other hand, countries located in what we call in this paper Developing OECD are recent admits to that organization so they have not reported FDI data over an extended period of time. Therefore, in order to maximize the amount of observations, we will use the data reported by Industrial OECD countries when the FDI flows involves a Developing OECD country. Finally, the OECD data obviously does not collect information reported by countries that do not belong to that organization so we must rely on the data reported by OECD countries in this case. The details of the information used for each type of bilateral FDI flow are provided in Table 6.