عنوان انگلیسی
Has there been any change in the comovement between the Chinese and US stock markets?
دانلود فوری مقاله + سفارش ترجمه 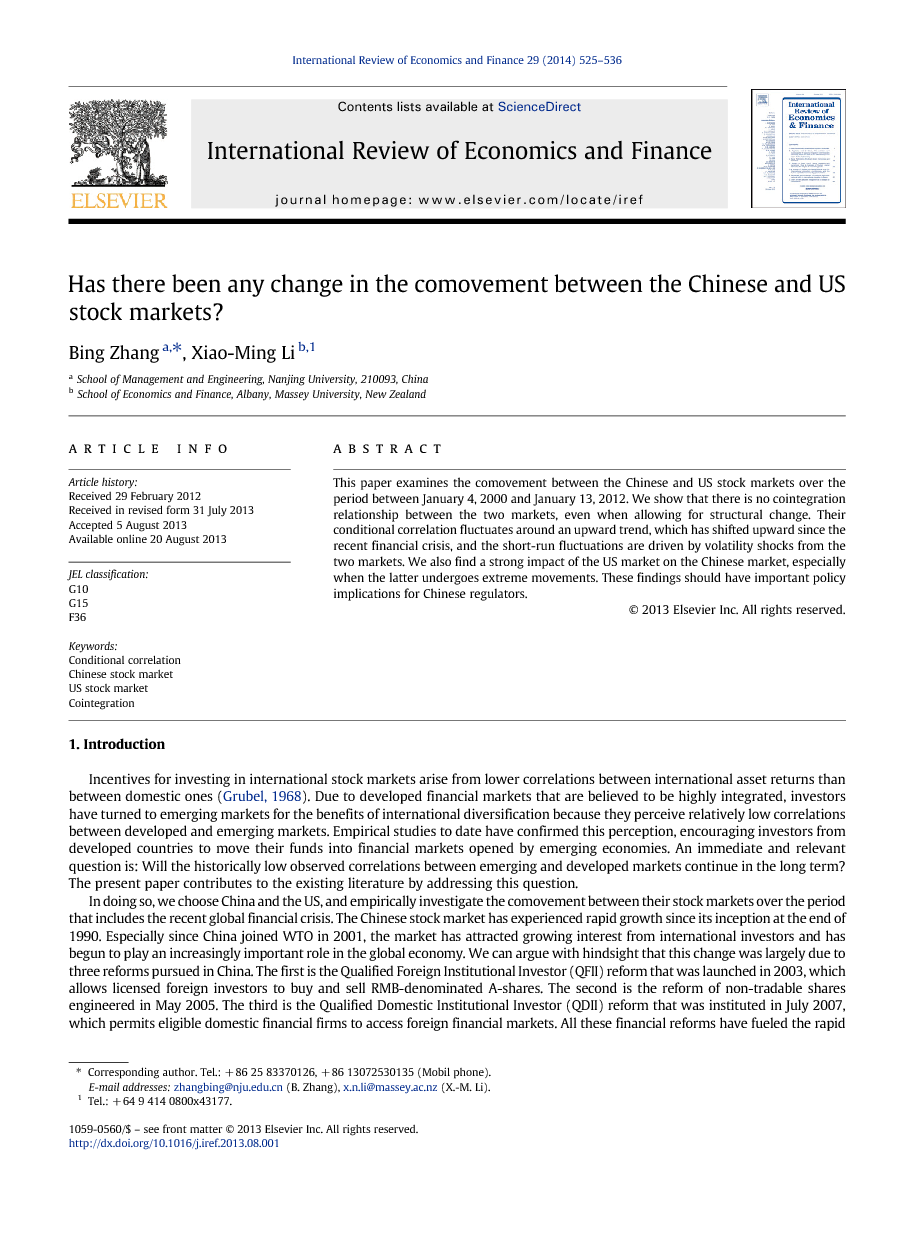 This paper examines the comovement between the Chinese and US stock markets over the period between January 4, 2000 and January 13, 2012. We show that there is no cointegration relationship between the two markets, even when allowing for structural change. Their conditional correlation fluctuates around an upward trend, which has shifted upward since the recent financial crisis, and the short-run fluctuations are driven by volatility shocks from the two markets. We also find a strong impact of the US market on the Chinese market, especially when the latter undergoes extreme movements. These findings should have important policy implications for Chinese regulators.

This paper empirically investigates the comovement between the Chinese and US stock markets with a focus on its change. Our investigation is comprehensive, in the sense that we examine three surrounding issues of the comovement: cointegration, correlation and linkages at different quantiles. The main conclusions are summarized as follows. First, we do not find strong evidence in support of a long-term cointegration relationship between the two markets, even when allowing for a break occurring at an unknown date. This finding is consistent with that of an earlier study by Huang et al. (2000), although our sample period is more recent. Second, we do find strong evidence that the correlation between the two markets is time-varying, has an upward trend, and possesses an upward structural break in the trend due to the 2008 financial crisis. The message conveyed by this finding is that the diversification benefits of the two market indices have lessened over time in general, and have recently dropped sharply in particular, for both international and domestic investors. Third, we also find clear evidence that because of the eruption of the 2008 financial crisis, the US close-to-close market returns have impacted the Chinese close-to-open next day market returns, and the impact has been stronger when the latter moves more drastically. A policy implication directly results from our conclusion that the Chinese stock market is now highly susceptible to shocks originating in the US stock market (or, if generalized, in the world stock markets). This poses a challenge to Chinese regulators if they wish to maintain the stability of domestic financial markets: policies designed to further control cross-border capital flows may prevent the US financial crises from taking place in China, but would also hinder financial liberalization. This seems to run counter to the general orientation of China's economic reforms and “open-up” policies. However, making recommendations for the optimal policies that the Chinese government should adopt is beyond the scope of this paper.