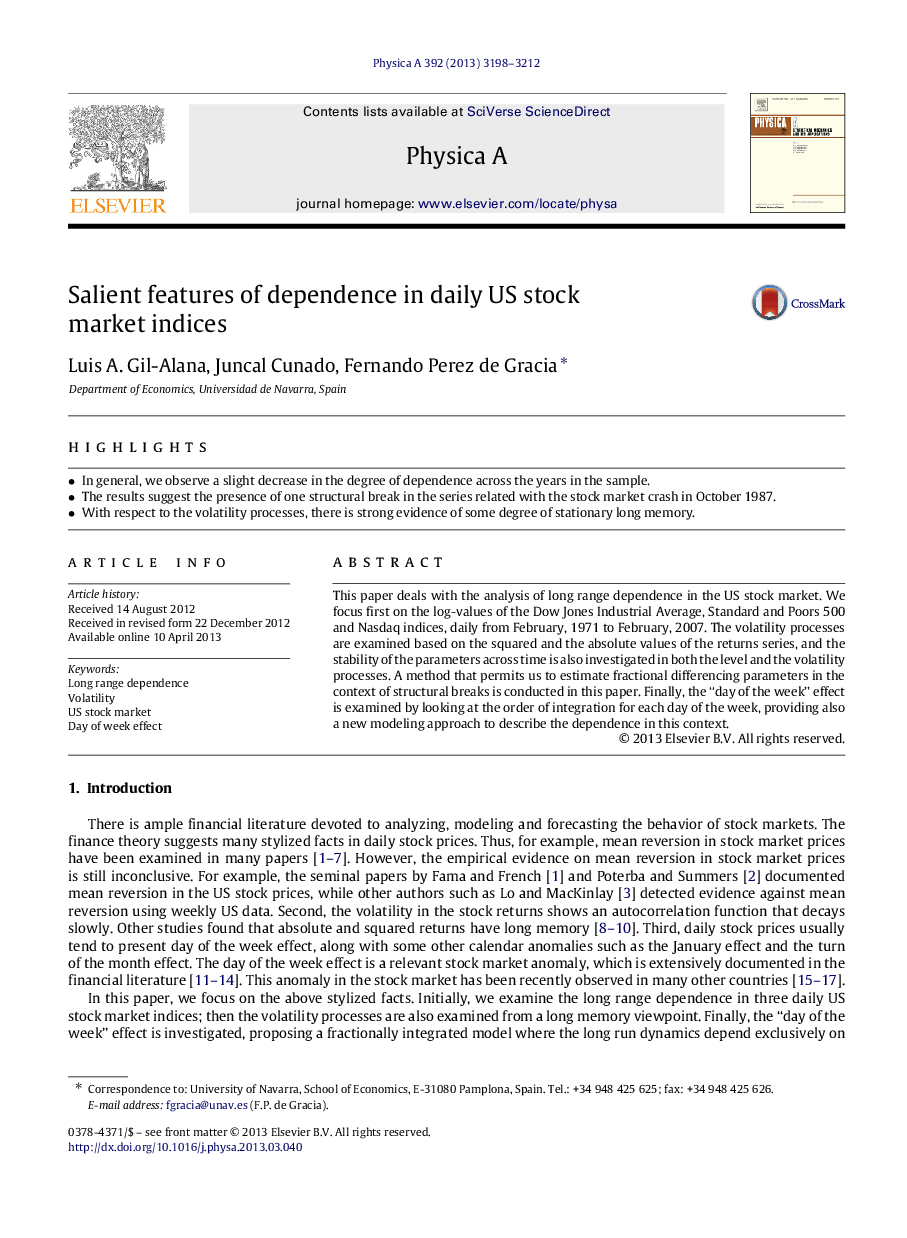 This paper deals with the analysis of long range dependence in the US stock market. We focus first on the log-values of the Dow Jones Industrial Average, Standard and Poors 500 and Nasdaq indices, daily from February, 1971 to February, 2007. The volatility processes are examined based on the squared and the absolute values of the returns series, and the stability of the parameters across time is also investigated in both the level and the volatility processes. A method that permits us to estimate fractional differencing parameters in the context of structural breaks is conducted in this paper. Finally, the “day of the week” effect is examined by looking at the order of integration for each day of the week, providing also a new modeling approach to describe the dependence in this context.

There is ample financial literature devoted to analyzing, modeling and forecasting the behavior of stock markets. The finance theory suggests many stylized facts in daily stock prices. Thus, for example, mean reversion in stock market prices have been examined in many papers [1], [2], [3], [4], [5], [6] and [7]. However, the empirical evidence on mean reversion in stock market prices is still inconclusive. For example, the seminal papers by Fama and French [1] and Poterba and Summers [2] documented mean reversion in the US stock prices, while other authors such as Lo and MacKinlay [3] detected evidence against mean reversion using weekly US data. Second, the volatility in the stock returns shows an autocorrelation function that decays slowly. Other studies found that absolute and squared returns have long memory [8], [9] and [10]. Third, daily stock prices usually tend to present day of the week effect, along with some other calendar anomalies such as the January effect and the turn of the month effect. The day of the week effect is a relevant stock market anomaly, which is extensively documented in the financial literature [11], [12], [13] and [14]. This anomaly in the stock market has been recently observed in many other countries [15], [16] and [17]. In this paper, we focus on the above stylized facts. Initially, we examine the long range dependence in three daily US stock market indices; then the volatility processes are also examined from a long memory viewpoint. Finally, the “day of the week” effect is investigated, proposing a fractionally integrated model where the long run dynamics depend exclusively on the day of the week. Long range dependence has been extensively examined in stock markets [18], [19], [20] and [21]. Most of the empirical evidence using long range dependence is inconclusive. Thus, some authors find little or no evidence of long memory in stock markets [22]. On the other hand, others’ papers find evidence of long memory in monthly, weekly, and daily stock market returns [23], [24], [25], [26] and [27]. Finally, long range cross-correlations among financial indices have been examined by Podobnik et al. [28] and more recently by Wang et al. [29]. The contribution of this work is two-folded: first we provide further evidence of the long memory properties of the stock market indices and their volatility processes along with an analysis of their stability across time. In this context, a recent procedure to determine fractional integration with structural breaks is implemented. Second, we introduce a new model also based on long memory to describe the day-of-the-week effect in financial markets. The rest of the paper is structured as follows. Section 2 briefly describes the statistical models employed in the paper. Section 3 describes the data; in Section 4 we present the main results of the paper, while Section 5 contains some concluding comments and extensions.

In this paper, we have examined the long range dependence in the US stock market by means of investigating the orders of integration of the DJIA, the S&P and the Nasdaq indices over the period February 5, 1971 to February 7, 2007. The volatility processes are also examined by looking at the degrees of integration of the absolute and squared returns, which are used as proxies for the volatility. In the final part of the paper we have examined the “day of the week” effect, first by looking at the orders of integration separately for each day of the week, and then proposing a new modeling framework, based on the long run dependence for the week-day effect. The results can be summarized as follows: first, we observe very similar patterns for the DJIA and the S&P indices compared with the Nasdaq index. The Nasdaq index only includes technology stocks whereas the DJIA and the S&P indices include stocks from the industrial sector and other sectors and thus are usually good indicators of the stock market as a whole. Thus, the similarities observed in these two indices may also be translated to their degrees of persistence. Starting with the original log-series, we observe that if all the dependence is captured through the fractional differencing polynomial, the order of integration is slightly above 1, and the unit root cannot be rejected for the DJIA and the S&P. However, allowing weak dependence (AR and Bloomfield) the orders of integration are significantly smaller than 1 (and thus showing mean reversion) for these two indices, while it is statistically significantly above 1 for the Nasdaq. In general, we observe a slight decrease in the degree of dependence across the years in the sample. Further, we also examine the existence of possible structural breaks in the three stock market indices. The results suggest the presence of one structural break in the series related with the stock market crash in October 1987 when the DJIA lose 22%, the S&P also dropped 20% and 11% in the Nasdaq in one day. The unit root cannot be rejected for any of the three indices for the period after the stock market crash. With respect to the volatility processes, there is strong evidence of some degree of stationary long memory (0<d<0.50<d<0.5) for the two proxies in the three series, being once more higher in the case of the Nasdaq index. If we separate the data by the day of the week, the lowest degrees of dependence are obtained in the three series on Mondays and Tuesdays. Modeling the “day of the week” effect by means of a long memory model, mean reversion is obtained in practically all cases, with higher values of the differencing parameter observed again for the Nasdaq index. Thus, the Nasdaq seems to be the closest market to efficiency while the DJIA and S&P500 seem to present a small degree of mean reversion.