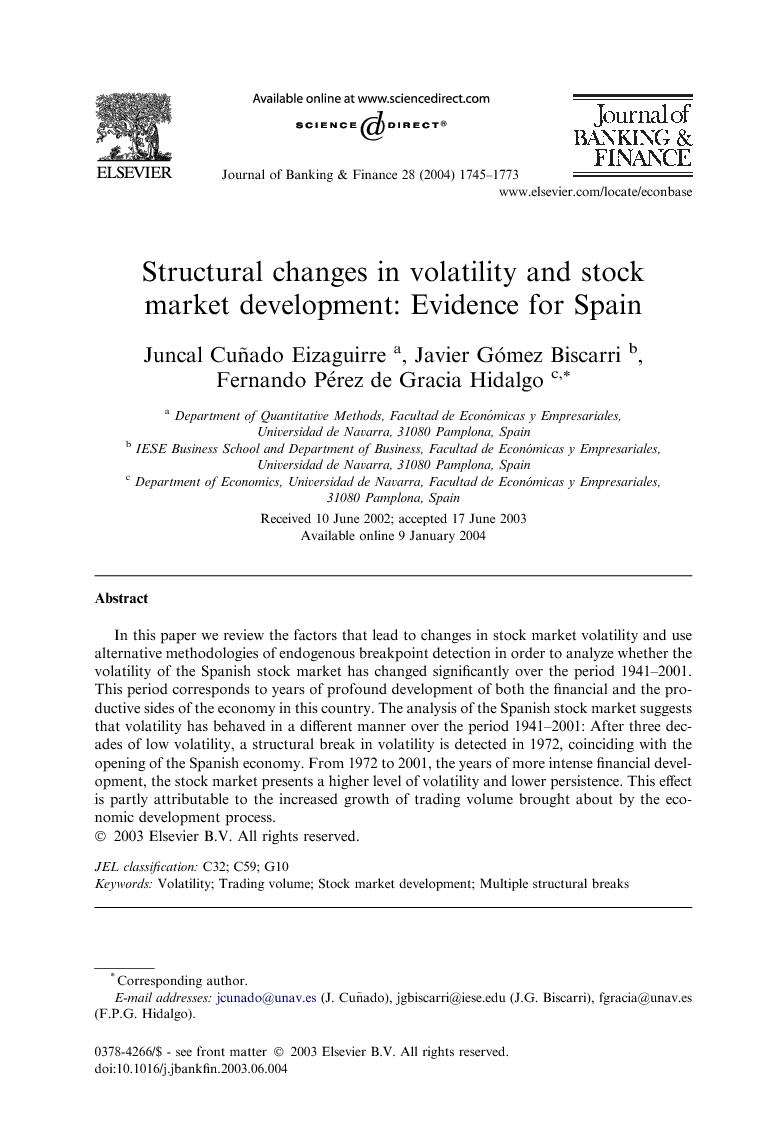 In this paper we review the factors that lead to changes in stock market volatility and use alternative methodologies of endogenous breakpoint detection in order to analyze whether the volatility of the Spanish stock market has changed significantly over the period 1941–2001. This period corresponds to years of profound development of both the financial and the productive sides of the economy in this country. The analysis of the Spanish stock market suggests that volatility has behaved in a different manner over the period 1941–2001: After three decades of low volatility, a structural break in volatility is detected in 1972, coinciding with the opening of the Spanish economy. From 1972 to 2001, the years of more intense financial development, the stock market presents a higher level of volatility and lower persistence. This effect is partly attributable to the increased growth of trading volume brought about by the economic development process.

Financial markets and institutions play a key role in the economy by channeling funds from savers to investors. Volatility in the prices of financial assets becomes a normal part of the process of allocating investable funds among competing uses. However, excessive or extreme volatility of interest rates, exchange rates or stock prices may be detrimental because such volatility may impair the smooth functioning of the financial system and adversely affect economic performance.1 Stock market volatility, in particular, could harm the economy through a number of channels.2 One way that stock price volatility hinders economic performance is through consumer spending (e.g., Campbell, 1996; Starr-McCluer, 1998; Ludvigson and Steindel, 1999; Poterba, 2000). This relates to the wealth effect of the stock market in consumption that became especially worrisome after the drop in stock prices in the first semester of 2000. In addition, the likely subsequent weakening in consumer confidence could contribute to a further reduction in expenditure. Stock price volatility may also affect business investment spending (Zuliu, 1995) and, consequently, economic growth (Levine and Zervos, 1996; Arestis et al., 2001): Investors interpret a raise in stock market volatility as an increase in the risk of equity investment and they shift their funds to less risky assets. This reaction raises the cost of funds for firms and new firms might bear the brunt of this effect as investors gravitate toward the purchase of stock in larger, better known firms. Finally, extremely high volatility could also disrupt the smooth functioning of the financial system and lead to structural or regulatory changes that may be necessary to increase the resiliency of the market in the face of greater volatility. In this paper we analyze whether the volatility of the Spanish stock market has changed significantly over the period 1941–2001. The choice of this country makes the analysis especially relevant. Our data start in 1941, when Spain was a closed economy with an incipient and underdeveloped stock market. By the end of the sample, in 2001, Spain could be counted among the most developed economies of the world, its capital markets were fully liberalized and it had qualified to become a founding member of the European Monetary Union. Our sample, therefore, covers the years of development of the stock market and of economic and financial opening and integration of the country. The analysis of the possible impact of these events in the behavior of the stock market becomes relevant for our understanding of the functioning of financial markets and for those countries that are now undergoing similar processes, such as the transition countries in Europe. Our objective is to ascertain when significant changes in the structure of Spanish stock market volatility have occurred and to place those changes in the context of the recent history of the Spanish economy. We are interested in both transitory and structural changes in volatility: An examination of the evolution of stock market volatility in Spain in the last six decades not only shows evidence of ARCH-type effects, i.e. periods of persistently higher/lower volatility that arise because of the arrival of new information, but also of shifts in unconditional volatility. The latter suggest the existence of changes – structural breaks – in the statistical model generating return volatility. We detect these structural changes, although in order to not impose a priori when the changes occur we use methodologies based on the estimation of endogenous breakpoints. Moreover, since the richness of the period analyzed suggests the possibility of more than one change in the behavior of the stock market we allow for multiple breaks in the series, moving into the estimation of a (still unspecified) number of structural breaks. Our analysis follows the procedures suggested by Bai and Perron, 1998, Bai and Perron, 2003a and Bai and Perron, 2003b which have already been successfully applied by Bekaert et al., 2002a and Bekaert et al., 2002b to investigate multiple structural changes in the stock markets of emerging economies, but we test for robustness of our results by using two additional tests for endogenous breaks in volatility ( Kokoszka and Leipus, 2000; Inclán and Tiao, 1994). We finally complement the results of the structural break analysis by looking at the relationship of volatility to trading volume. The structure of the paper is as follows. In Section 2 we briefly review the factors that may drive changes in stock market volatility. Section 3 analyzes changes in the Spanish stock market volatility using a battery of methodologies. Emphasis is placed on the detection of structural breaks and on the relationship of volatility to trading volume. Section 4 comments on the results in the light of the relevant historical events related to the evolution of the Spanish economy. Finally, Section 5 concludes.

In this paper we have analyzed the behavior of Spanish stock market volatility, placing special emphasis on detecting whether volatility has changed its behavior significantly over the period 1941:01–2001:12 and on identifying the causes of such changes. The time evolution of Spanish stock market volatility reveals that, apart from the periods of transitory instability induced by shocks to the market, the average level of market volatility has been significantly higher over the period 1972–2001 whereas it was relatively lower during the earlier years. Also, periods of abnormally high market volatility in the last years – stemming from episodes of global financial instability – present a much higher intensity but a reduced persistence when compared to unstable periods at the beginning of the sample. There is therefore a change both in average volatility and in its dynamic behavior: The stock market in the latter years is subject to higher but less persistent instability. In order to analyze these effects, we estimated a volatility model that allowed for endogenous structural breaks. We detected one single structural break in volatility behavior, located around June 1972. The unconditional level of volatility went up significantly at the time of the break, but both persistence and the impact of big shocks decreased after the break. In view of this, and seeing that the years of stock market development have come in hand with a continuous increase in trading volume, the effect of volume on stock market volatility was analyzed. The results showed that growth in trading volume has a significant impact on stock market volatility, although this relationship has been stable through the years. Moreover, it was not the acceleration in trading volume – that took place around 1984 – that brought about the increased volatility, but most likely the intensification of the process of economic development and opening that the Spanish economy went through in the 1970s. In the light of the recent instances of financial instability and crises, further research on this topic becomes a top priority. Given the importance of a smooth functioning of stock markets and the continuous increased importance of international financial flows, efforts towards understanding the factors that affect the stock market – by making it more unstable, or changing its dynamic behavior – and the side consequences derived from these changes in behavior are likely to yield benefits both for regulators, investors and for those involved in the processes of economic reform.