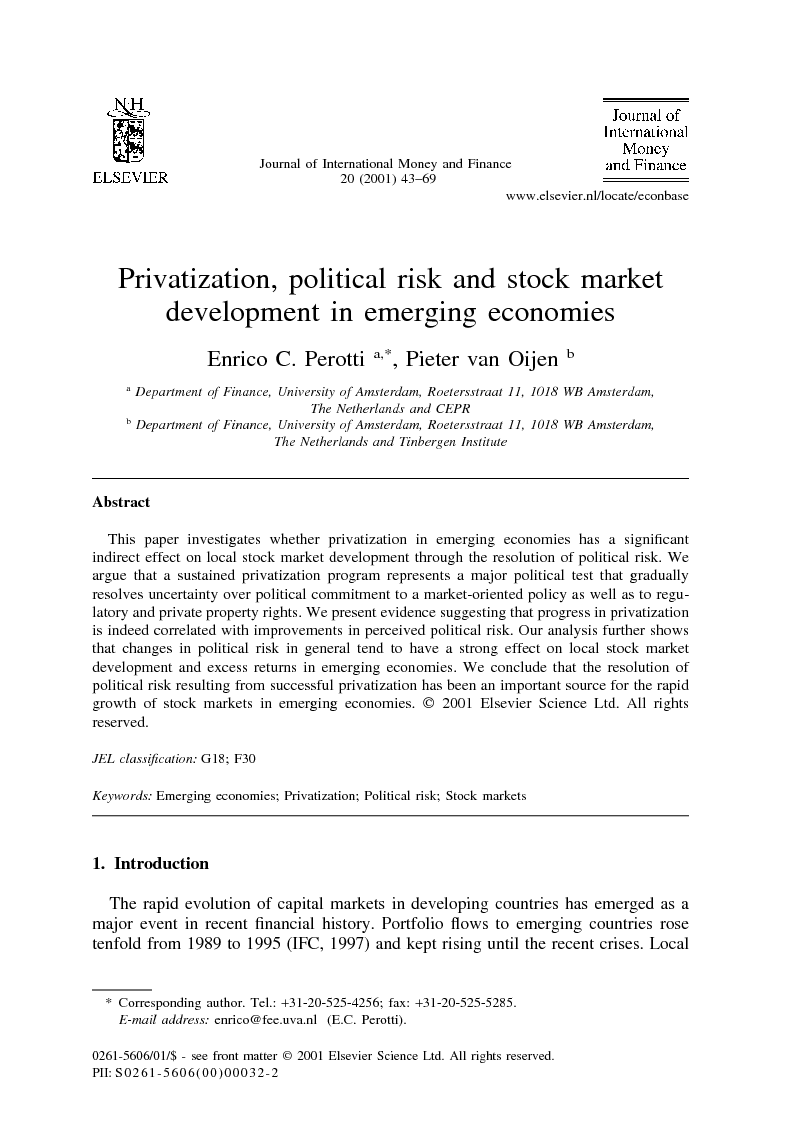 We have presented evidence that the resolution of political risk through sustained privatization has been an important source for the recent growth in emerging stock markets. It seems that sustained privatization has gradually strengthened the institutional framework by forcing a resolution of political and legal uncertainties which till then hinder equity market development. This ultimately leads to an increase in investor confidence. On average, this process seems to take place gradually as privatization proceeds. An interesting empirical issue is the robustness of our results. Our sample may reflect a set of relatively successful privatizing countries, for which the early 1990s were a privatization stage, just when emerging stock markets generally performed quite well. However, our argument is that is no coincidence: emerging markets performed so well because they managed to convince many investors of their own reliability through radical economic reforms such as privatization. Ultimately, this is an empirical question which can be addressed at best when a longer historical experience becomes available. It is possible that privatization, perhaps because it establishes more broad-based ownership, can by itself resolve political risk by helping to overcome political resistance to market reforms and their effect. Biais and Perotti (1999) develop a simple model of how a large privatization program may be designed so as to reduce political risk of future policy reversals. A market-oriented party may increase the probability of being re-elected by implementing a series of underpriced sales, where excess demand is rationed so as to ensure a broad diffusion of shareholding and to reward long-term holdings. A wide diffusion of shares may have the effect of shifting the preferences of the middle-class. This structural shift in the political equilibrium creates stable political support for market reforms and reduces political risk for equity investment, reducing the equity premium and increasing market capitalization. Jones et al. (1998) find significant empirical support for these conclusions by analyzing the pricing and share allocations affiliated with privatization sales. In our view these observations and the results in our paper point to a strong potential for research developments in the area of political economy and corporate finance. Privatization, just like nationalization, has strong redistributive effects and tends to cause political conflict, the outcome of which is most informative for investors.