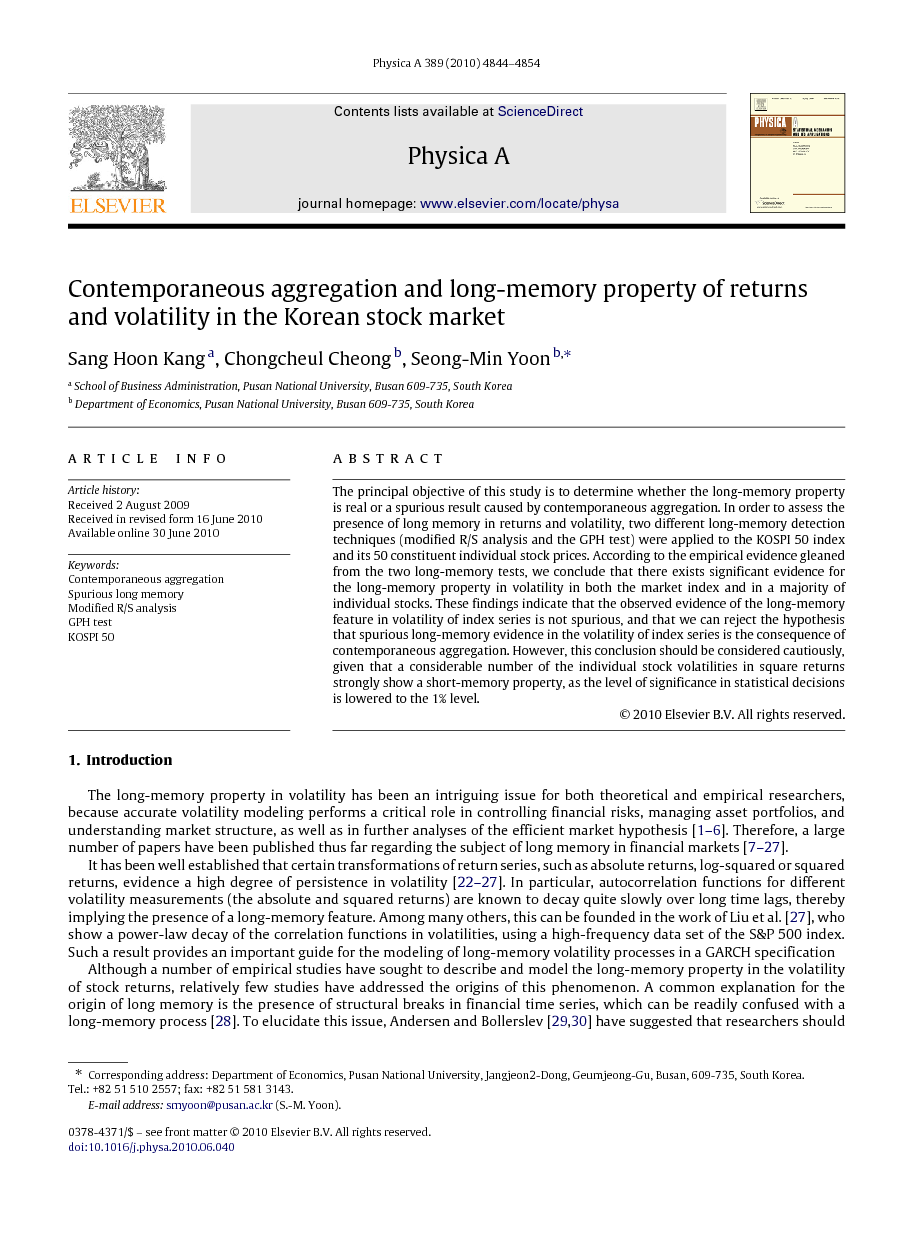 The principal objective of this study is to determine whether the long-memory property is real or a spurious result caused by contemporaneous aggregation. In order to assess the presence of long memory in returns and volatility, two different long-memory detection techniques (modified R/S analysis and the GPH test) were applied to the KOSPI 50 index and its 50 constituent individual stock prices. According to the empirical evidence gleaned from the two long-memory tests, we conclude that there exists significant evidence for the long-memory property in volatility in both the market index and in a majority of individual stocks. These findings indicate that the observed evidence of the long-memory feature in volatility of index series is not spurious, and that we can reject the hypothesis that spurious long-memory evidence in the volatility of index series is the consequence of contemporaneous aggregation. However, this conclusion should be considered cautiously, given that a considerable number of the individual stock volatilities in square returns strongly show a short-memory property, as the level of significance in statistical decisions is lowered to the 1% level.

The long-memory property in volatility has been an intriguing issue for both theoretical and empirical researchers, because accurate volatility modeling performs a critical role in controlling financial risks, managing asset portfolios, and understanding market structure, as well as in further analyses of the efficient market hypothesis [1], [2], [3], [4], [5] and [6]. Therefore, a large number of papers have been published thus far regarding the subject of long memory in financial markets [7], [8], [9], [10], [11], [12], [13], [14], [15], [16], [17], [18], [19], [20], [21], [22], [23], [24], [25], [26] and [27]. It has been well established that certain transformations of return series, such as absolute returns, log-squared or squared returns, evidence a high degree of persistence in volatility [22], [23], [24], [25], [26] and [27]. In particular, autocorrelation functions for different volatility measurements (the absolute and squared returns) are known to decay quite slowly over long time lags, thereby implying the presence of a long-memory feature. Among many others, this can be founded in the work of Liu et al. [27], who show a power-law decay of the correlation functions in volatilities, using a high-frequency data set of the S&P 500 index. Such a result provides an important guide for the modeling of long-memory volatility processes in a GARCH specification Although a number of empirical studies have sought to describe and model the long-memory property in the volatility of stock returns, relatively few studies have addressed the origins of this phenomenon. A common explanation for the origin of long memory is the presence of structural breaks in financial time series, which can be readily confused with a long-memory process [28]. To elucidate this issue, Andersen and Bollerslev [29] and [30] have suggested that researchers should examine whether long-memory volatility processes are invariant with regard to temporally aggregated data in which the dynamics of the underlying process take place more frequently than the process is itself observed. For example, a data series may be observed on a quarterly basis but its underlying dynamics may be defined in terms of a period of one month. In this case, if one finds the same degree of long-memory property regardless of the data frequency, one could conclude that persistence in volatility is not spurious as a result of the exogenous shocks such as structural breaks but rather an intrinsic feature of the data-generating process [31]. From this perspective, some studies have demonstrated that the estimates of long-memory parameter are invariant to temporal aggregation, which supports the theory that the returns are self-similar or a fractal structure of data-generating processes [20], [32] and [33]. For example, Ivanov et al. [34], who used intertrading dynamics of stocks rather than price dynamics, found long-range power-law correlations with a pronounced crossover to larger exponent at scales above one trading day. They interpret the evidence as a parallel one with the crossover in the scaling of absolute price returns shown by Liu et al. [27] for each individual stock and regard this as supportive evidence for the hypothesis that the long-memory property of stock returns is irrelevant to temporal aggregation. Another of the common causes of spurious long memory is a contemporaneous aggregation effect in the aggregates index [35], [36], [37], [38], [39], [40], [41] and [42]. Although there is no long memory inherent to the individual series themselves, long memory in the index can arise solely from the aggregation process. The principal focus of this paper is to evaluate long-memory volatility processes in the Korean stock market with regard to the contemporaneous aggregation effect. This empirical examination will contribute to the current body of knowledge in two distinct ways. First, although several studies have affirmed the existence of an aggregation effect in developed markets, relatively little literature has addressed this issue in the context of the Korean stock market [43]. In order to evaluate the contemporaneous aggregation effect, this paper uses the daily KOSPI 50 index and its 50 constituent individual stocks. Second, using two different techniques, namely non-parametric (modified R/S analysis) and semi-parametric (GPH) tests, the findings of this study should improve the robustness of long-memory test results.1 Both tests examine the null hypothesis of a short-memory or no-memory process against long-memory alternatives. The remainder of this paper is organized as follows. Section 2 discusses the theoretical background relevant to the contemporaneous aggregation effect. Section 3 presents the characteristics of the sample data. Section 4 provides the methodologies of modified R/S analysis and the GPH test. Section 5 reports the empirical results, attempting to determine whether the observed long-memory property in the volatility of stock returns is spurious as the result of contemporaneous aggregation. The final section summarizes the most salient conclusions.

This study has primarily focused on evaluating long-memory properties in returns and the volatility of the Korean stock market, and has also attempted to determine whether the long-memory property is real or a spurious result induced by contemporaneous aggregation. To determine the presence of long memory in returns and volatility, two different long-memory detection techniques were applied to the KOSPI 50 index and its 50 constituent individual stock prices. The empirical evidence from the two long-memory tests in returns and volatility raises two crucial issues. First, the test results indicated no evidence of long memory in the level of the market index return and most of its individual constituent stock returns, except for three stock returns at the 5% level. However, the test results appeared to favor the presence of long memory in both absolute and squared returns of a market index. Thus, estimates of standard option pricing models predicated on the assumption of a short-memory process, such as a GARCH model, can prove misleading. Second, as most of the individual stock volatilities (absolute and square returns) were shown to evidence a long-memory property at the conventional level of significance, the null hypothesis that spurious long memory is attributable to the contemporaneous aggregation effect seems to be rejected in the case of the Korean stock index. However, this conclusion should be cautiously considered, given that a half of the individual stock volatilities in square returns in the GPH test with d(0.55)d(0.55) strongly show a short-memory property, if the chance of making a type-I error is reduced to the 1% level.