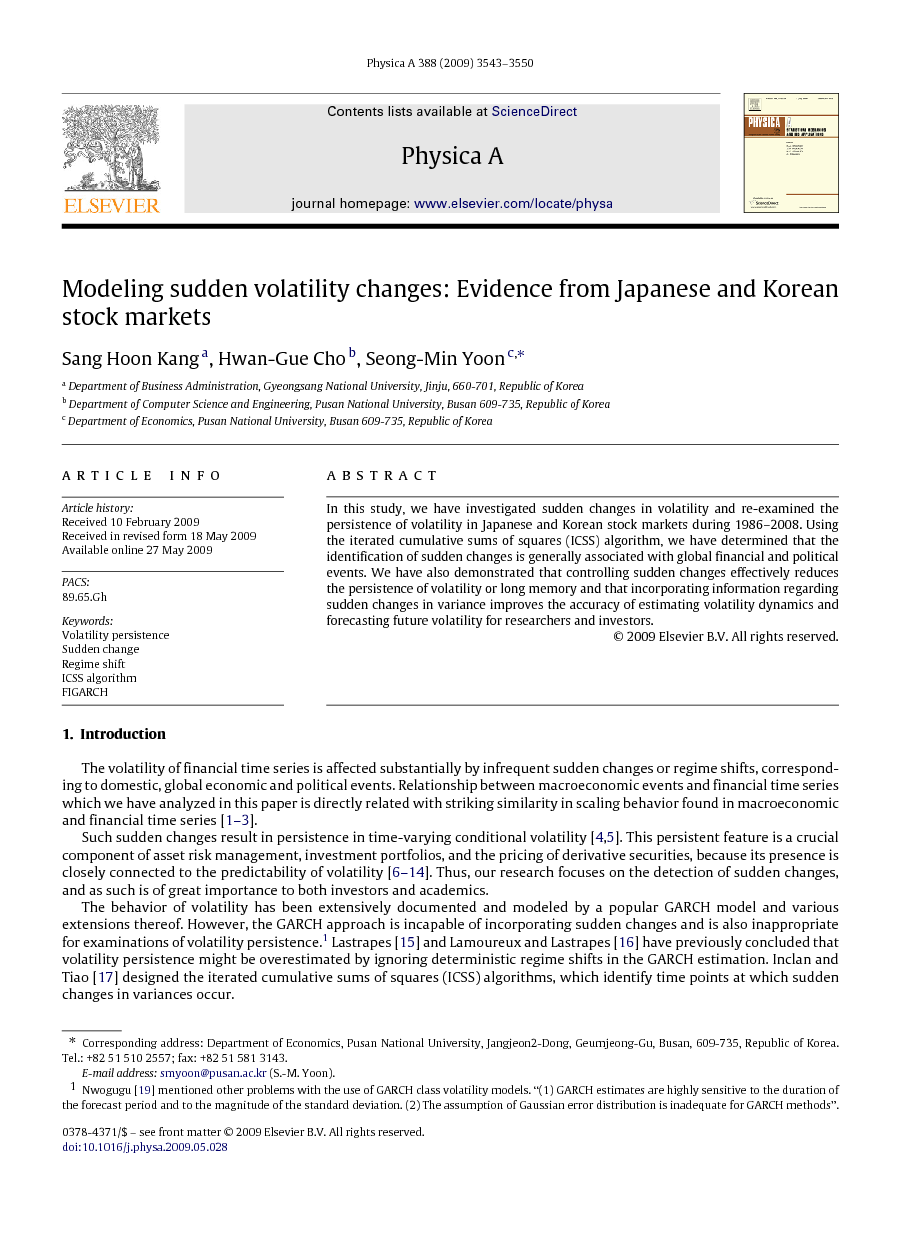 The volatility of financial time series is affected substantially by infrequent sudden changes or regime shifts, corresponding to domestic, global economic and political events. Relationship between macroeconomic events and financial time series which we have analyzed in this paper is directly related with striking similarity in scaling behavior found in macroeconomic and financial time series [1], [2] and [3]. Such sudden changes result in persistence in time-varying conditional volatility [4] and [5]. This persistent feature is a crucial component of asset risk management, investment portfolios, and the pricing of derivative securities, because its presence is closely connected to the predictability of volatility [6], [7], [8], [9], [10], [11], [12], [13] and [14]. Thus, our research focuses on the detection of sudden changes, and as such is of great importance to both investors and academics. The behavior of volatility has been extensively documented and modeled by a popular GARCH model and various extensions thereof. However, the GARCH approach is incapable of incorporating sudden changes and is also inappropriate for examinations of volatility persistence.1 Lastrapes [15] and Lamoureux and Lastrapes [16] have previously concluded that volatility persistence might be overestimated by ignoring deterministic regime shifts in the GARCH estimation. Inclan and Tiao [17] designed the iterated cumulative sums of squares (ICSS) algorithms, which identify time points at which sudden changes in variances occur. Aggarwal et al. [18] initially investigated large sudden shifts in the volatility of 10 emerging markets in Asia and Latin America, including Korea. They detected the time points of the sudden shifts using the ICSS algorithms, and then directly incorporated the impact of including sudden change dummies into the GARCH model. They concluded that accounting for sudden changes reduces the persistence in the GARCH model. Recently, several empirical studies have extended the methodology of Aggarwal et al. [18] using recent stock market data. For example, Malik et al. [20] have suggested that controlling regime shifts dramatically reduces volatility persistence in the Canadian stock market. Hammoudeh and Li [21] have examined significant reductions in volatility persistence for Gulf Cooperation Council (GCC) stock markets. Cheong [22] investigated the influence of structural breaks on a fractionally integrated GARCH (FIGARCH) volatility model in the Malaysian stock market. Wang and Moore [23] assessed the impact of sudden changes on volatility persistence in the transition economics of new members of the European Union (EU). The results of these studies unanimously support the notion that the incorporation of sudden changes into GARCH-type of models results in a significant reduction in the persistence of volatility in stock returns. This study re-examines the impacts of sudden changes on volatility persistence in Asian stock markets, namely Nikkei 225 of Tokyo Stock Exchange (TSE) and KOSPI 200 of Korean Exchange (KRX). The principal objectives of this study are twofold: First, in contrast to Aggarwal et al. [18], this study utilizes more recent weekly data covering the period from 1986 to 2008 (for Nikkei 225) and from 1990 to 2008 (for KOSPI 200). This period incorporates the growth and development of both markets, accompanied by a series of important sudden changes. Second, this study evaluates the impact of sudden changes on volatility persistence using GARCH and FIGARCH models. In particular, the incorporation of multiple changes into the FIGARCH model was conducted to assess the long memory (persistence) and structural changes inherent to stock markets. Some studies argued that sudden changes or structural breaks may give rise to spurious long memory in conditional variances [24], [25] and [26]. Thus, it is worth re-examining the issue of sudden changes vs. long memory in the volatility of stock market returns. The remainder of the paper is organized as follows. Section 2 briefly presents the methodology for the ICSS algorithm and for the GARCH and FIGARCH models. Section 3 describes the characteristics of the sample data. Section 4 provides the estimation results of the ICSS algorithm and the GARCH and FIGARCH models. The final section, Section 5, provides some concluding remarks.