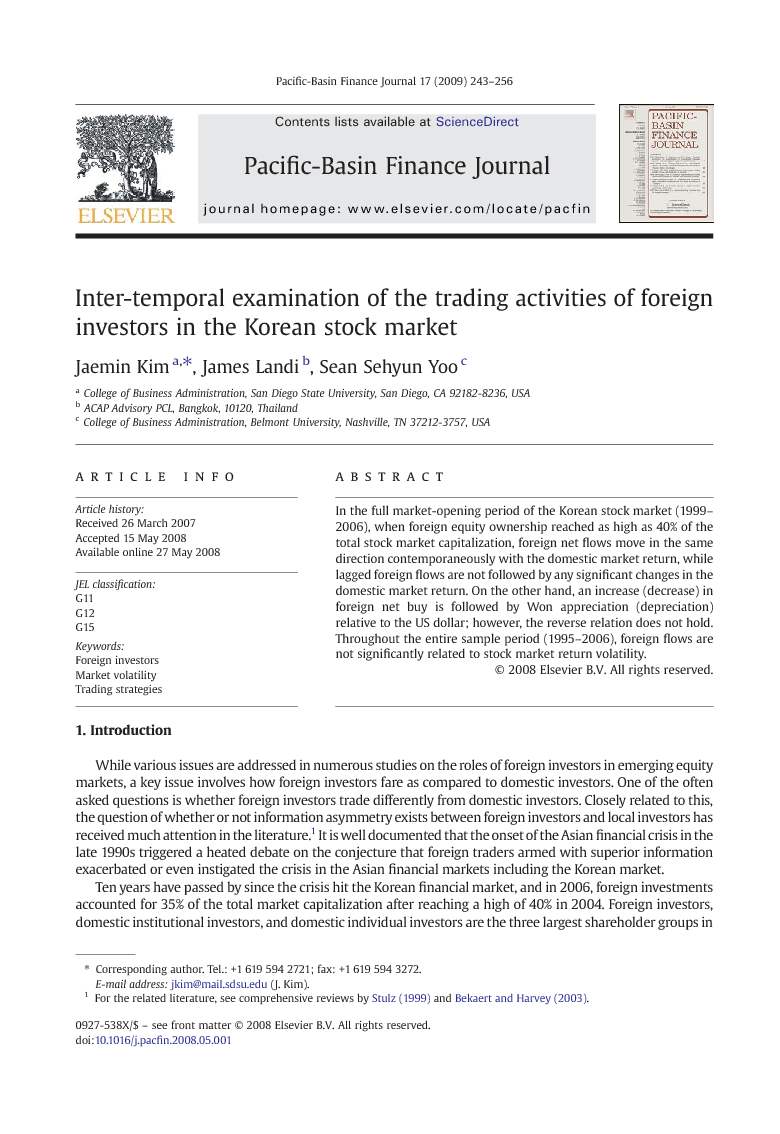 In the full market-opening period of the Korean stock market (1999–2006), when foreign equity ownership reached as high as 40% of the total stock market capitalization, foreign net flows move in the same direction contemporaneously with the domestic market return, while lagged foreign flows are not followed by any significant changes in the domestic market return. On the other hand, an increase (decrease) in foreign net buy is followed by Won appreciation (depreciation) relative to the US dollar; however, the reverse relation does not hold. Throughout the entire sample period (1995–2006), foreign flows are not significantly related to stock market return volatility.

The major contribution of this study is in investigating the inter-temporal changes in the net buys of foreign and domestic investors in relation to the market return, market return volatility, and foreign exchange rate return across periods before and after the complete market liberalization. The evidence reveals that foreign trading flows are not followed by significant changes in the market return in a period of a few days, and that foreign flows are not associated with any significant changes in market volatility, either, despite the fact that foreign holdings have accounted for up to 40% of the total market capitalization in recent years. In the full-opening sample, the contemporaneous foreign flow is significant in the market return; however, this result does not appear to support the view that foreign trades are information based. Just like the contemporaneous foreign flow, the contemporaneous net buy of domestic institutions is positive and significant in the domestic market return in the full-opening sample. Assuming most of the foreign investors are institutional investors, this result supports the conjecture that both foreign and domestic institutions have a tendency to herd when they trade contemporaneously with the market movement in a given day in the fully-liberalized, post-crisis Korean stock market. With respect to the foreign exchange rate (Korean won/U.S. dollar) return, VAR analyses show that during the post-crisis, full-market liberalization period, an increase (decrease) in foreign net buy is followed by appreciation (depreciation) of the Korean won relative to the US dollar, whereas trading decisions by foreign investors (and domestic institutions as well) are insensitive to fluctuations in the foreign exchange rate in any period. Given the aggregate nature of the data, we could not directly investigate whether foreign investors perform better than locals in terms of trading profits. Nor can we perform a direct examination as to whether foreigners trade based on superior information, be it inside information or unique insights arising from advanced skills in analyzing publicly available data. We leave these issues to future research.