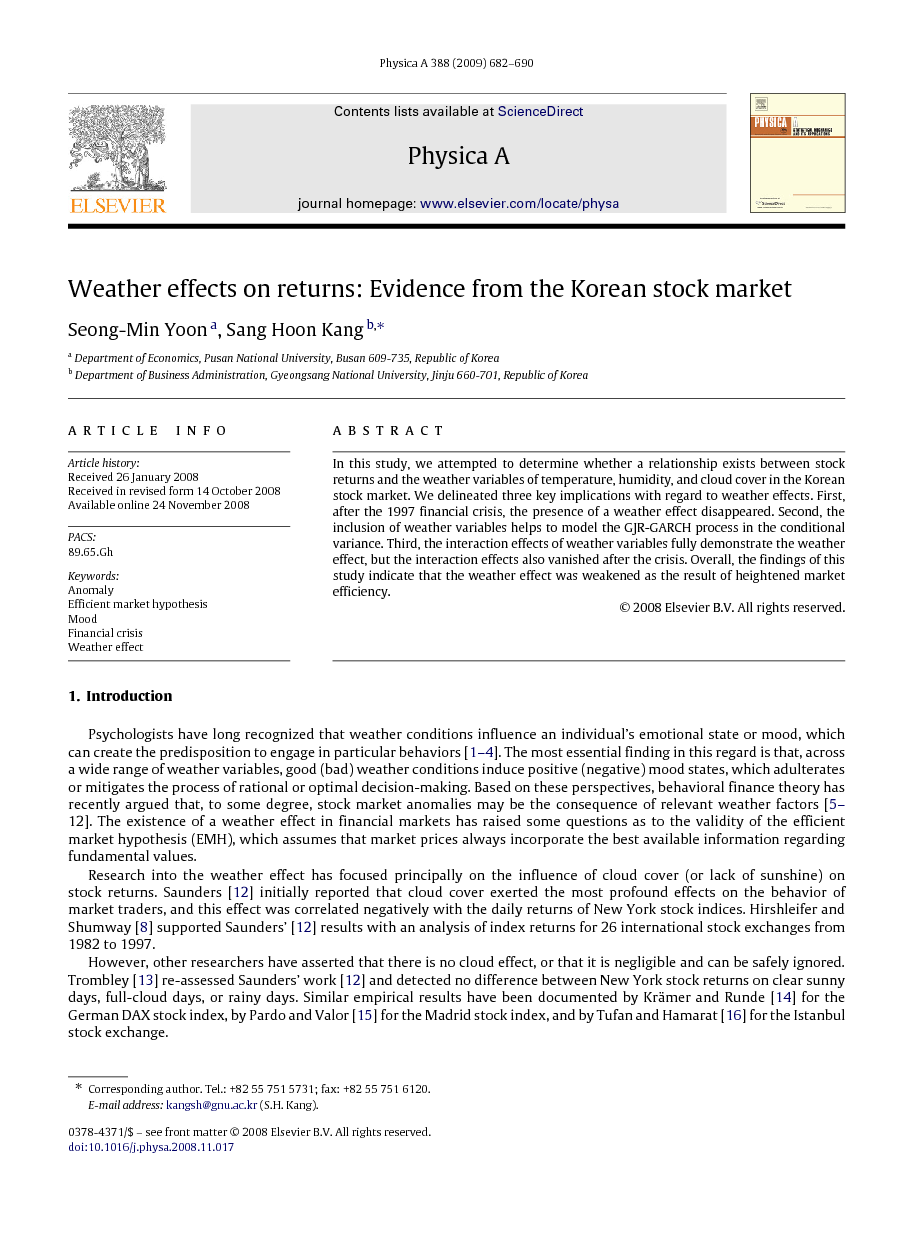 Psychologists have long recognized that weather conditions influence an individual’s emotional state or mood, which can create the predisposition to engage in particular behaviors [1], [2], [3] and [4]. The most essential finding in this regard is that, across a wide range of weather variables, good (bad) weather conditions induce positive (negative) mood states, which adulterates or mitigates the process of rational or optimal decision-making. Based on these perspectives, behavioral finance theory has recently argued that, to some degree, stock market anomalies may be the consequence of relevant weather factors [5], [6], [7], [8], [9], [10], [11] and [12]. The existence of a weather effect in financial markets has raised some questions as to the validity of the efficient market hypothesis (EMH), which assumes that market prices always incorporate the best available information regarding fundamental values. Research into the weather effect has focused principally on the influence of cloud cover (or lack of sunshine) on stock returns. Saunders [12] initially reported that cloud cover exerted the most profound effects on the behavior of market traders, and this effect was correlated negatively with the daily returns of New York stock indices. Hirshleifer and Shumway [8] supported Saunders’ [12] results with an analysis of index returns for 26 international stock exchanges from 1982 to 1997. However, other researchers have asserted that there is no cloud effect, or that it is negligible and can be safely ignored. Trombley [13] re-assessed Saunders’ work [12] and detected no difference between New York stock returns on clear sunny days, full-cloud days, or rainy days. Similar empirical results have been documented by Krämer and Runde [14] for the German DAX stock index, by Pardo and Valor [15] for the Madrid stock index, and by Tufan and Hamarat [16] for the Istanbul stock exchange. More recent studies have explored the notion of a weather effect by evaluating the influences of multiple weather variables. Keef and Roush [9] and [10] previously assessed weather effects on the returns of New Zealand financial securities using three local weather factors: cloud cover, temperature, and wind. Only wind was found to exert a significant influence on the returns, and the influence of other weather factors was ambiguous. Dowling and Lucey [6] evaluated weather effects in daily Irish stock returns using four weather proxy variables: cloud, rain, humidity, and geomagnetic storms. Their evidence supports the hypothesis that weather variables do, indeed, affect stock returns. Furthermore, several studies have considered the influence of temperature on stock returns. Cao and Wei [17] and Keef and Roush [11] previously reported a negative correlation between temperature and returns. Chang et al. [5] also noted that temperature and cloud cover exerted a negative effect on returns in the Taiwan stock market. On the other hand, Jacobsen and Marquering [18] have suggested that the influence of temperature may be spurious, but market anomalies are associated with winter and summer seasonality. In summary, there is currently no general agreement in the relevant literature regarding the relationship between stock returns and weather. We re-examined whether a relationship existed between stock returns and three specific weather variables–temperature, humidity, and cloud cover–using Korean stock market data with a linear regression model using the GJR-GARCH process on error terms. These three weather factors are crucial variables for describing seasonal weather, and thus for analyzing the presence of a weather effect in the Korean stock market. In addition, we attempted to ascertain whether the extent of a weather effect may have been weakened following the October 1997 financial crisis. In order to analyze the influence on the financial crisis, we divided the sample period into two sub-periods, then compared the empirical results. There are two main motivations for this analysis. First, although various studies on weather effects in major stock markets have been conducted, only three empirical studies have examined the case of the Korean stock market, to the best of our knowledge [19], [20] and [21]. In addition, these three studies replicated Saunders’ [12] work, using only cloud cover in their analyses. Neither the moods of investors nor the weather are unitary constructs. Thus, we extended these previous studies by analyzing multiple weather factors to assess weather effects on the Korean stock market. Second, as weather factors are not an economical explanatory variable, they are generally considered dummy variables. However, there is currently no consensus in the relevant literature regarding the construction of dummy variables. Assuming that extreme weather conditions may result in more significant effects on stock returns than would normal weather conditions, we generated two dummy variables for each weather factor, depending on extremely above-average and extremely below-average weather conditions. These two dummy variables provided additional insight into the weather effects occurring in the Korean stock market. In Section 2, we provide the statistical characteristics of the stock return and weather data, and discuss the weather dummy variables and methodology. In Section 3, we assess the relationship between weather and stock returns and compare the results for the two sub-periods. In Section 4, we summarize the most relevant conclusions.

In this paper, we attempted to determine whether a relationship between three weather variables and Korean stock returns exists, via simple regression with the GJR-GARCH process. Additionally, we attempted to determine whether market structural changes resulting from the October 1997 financial crisis eliminated the existence of a weather effect. Empirical analysis revealed several key results regarding weather effects in the Korean stock market. First, the empirical evidence demonstrates that extreme weather conditions exert the most profound effect on stock returns. During the pre-crisis, extremely low temperatures exerted a positive influence on returns, whereas extremely high humidity and heavy cloudiness exerted a negative effect on returns. That is, the presence of a weather effect supports the hypothesis that irrelevant mood states do influence investor decisions in the Korean stock market. Second, after the 1997 financial crisis, evidence for a weather effect became insignificant; this was probably a result of the abolition of restrictions on foreign investors and the development of electronic trading systems in the Korean stock market. This evidence indicates that stock return dynamics are no longer affected by weather conditions or investors’ moods, as the result of market efficiency. Third, considering the GJR-GARCH process, the conditional volatility of the Korean stock market tends to be higher when the news is unfavorable. This evidence suggested that the inclusion of the non-economical variables (weather conditions) facilitates the modeling of asset pricing models. Finally, this study also considered the interaction effects of three weather variables, and determined that investors suffer significantly from the mixture of weather conditions. Nevertheless, the interaction effect seems to disappear during the post-crisis period. Overall, the empirical findings of our study are consistent with prior studies [19], [20] and [21], in which it was determined that the presence of weather effects was eliminated after the financial crisis. Nevertheless, this study assumed that human moods are sensitive to extreme weather conditions and generated multiple dummies of extremely high/low temperature, humidity, and cloudiness. This study also attempted to apply non-economical behavior variables in asset pricing models. In this context, this study provides in-depth contributions to market anomalies with regard to weather effects in the Korean stock market.