عنوان انگلیسی
The linkage between the US and Korean stock markets: the case of NASDAQ, KOSDAQ, and the semiconductor stocks
دانلود فوری مقاله + سفارش ترجمه 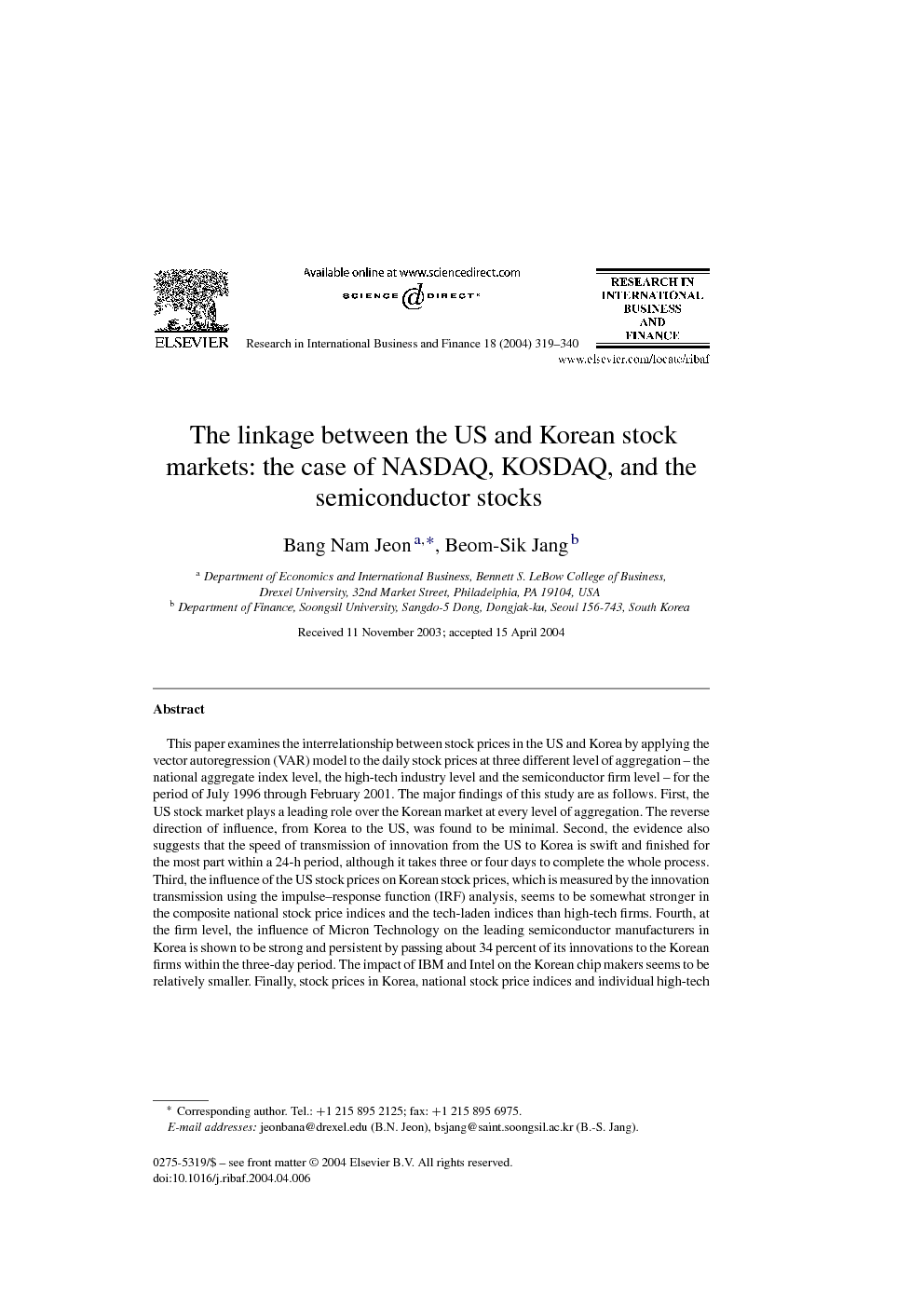 This paper examines the interrelationship between stock prices in the US and Korea by applying the vector autoregression (VAR) model to the daily stock prices at three different level of aggregation – the national aggregate index level, the high-tech industry level and the semiconductor firm level – for the period of July 1996 through February 2001. The major findings of this study are as follows. First, the US stock market plays a leading role over the Korean market at every level of aggregation. The reverse direction of influence, from Korea to the US, was found to be minimal. Second, the evidence also suggests that the speed of transmission of innovation from the US to Korea is swift and finished for the most part within a 24-h period, although it takes three or four days to complete the whole process. Third, the influence of the US stock prices on Korean stock prices, which is measured by the innovation transmission using the impulse–response function (IRF) analysis, seems to be somewhat stronger in the composite national stock price indices and the tech-laden indices than high-tech firms. Fourth, at the firm level, the influence of Micron Technology on the leading semiconductor manufacturers in Korea is shown to be strong and persistent by passing about 34 percent of its innovations to the Korean firms within the three-day period. The impact of IBM and Intel on the Korean chip makers seems to be relatively smaller. Finally, stock prices in Korea, national stock price indices and individual high-tech stocks alike, have become much more responsive to innovations in the US stock prices after the 1997 financial crisis. The implications of the main findings in this paper are also discussed.

As world financial markets have become more closely linked in recent years, national stock markets increasingly react to each other. Nearly simultaneous collapses of world stock markets in October 1987 and of Asian stock markets in late 1997 provide just a few conspicuous examples of the increasing interdependence and contagion in the global stock markets. Many researchers have examined the interrelationships and the information transmission patterns among stock prices across selected stock markets, and explored to search for their underlying reasons and driving forces. Earlier research has explored dynamic interdependence, return and volatility transmission, and market integration among major world stock exchanges, applying vector autoregression (VAR) and autoregressive conditional heteroskedastic (ARCH) types of empirical models using high frequency data. Frontier studies include von Furstenberg and Jeon (1989), Eun and Shim (1989), Jeon and von Furstenberg (1990), Hamao et al. (1990), Campbell and Hamao (1992), and Karolyi and Stulz (1996), among others.1 Several researchers have also attempted to find out the main reasons behind the increasing interdependence among major stock markets: deregulation (Taylor and Tonks, 1989 and Jeon and Chiang, 1991), international business cycle (Kasa, 1992), regional affiliations and trade linkages (Bachman et al., 1996), and regional economic integration (Booth et al., 1997). von Furstenberg and Jeon (1989) investigated whether differences in industry composition can help account for unequal changes in national stock indices. Roll (1992) indeed found that a significant part of national stock market correlations can be explained by the industry structure. Several studies have provided evidence of the impact of the world’s leading markets on emerging markets or intra-regional contagion effects (see, e.g., Jeon et al., 1996, Knif and Pynnonen, 1999, Tay and Zhu, 2000, Maysami and Koh, 2000, Sheng and Tu, 2000, Masih and Masih, 1999 and Masih and Masih, 2001) Relatively few studies have examined industry-based stock market interdependence in developing countries. However, fund managers and market analysts have been looking at company stocks in emerging economies through a sector lens, rather than assessing stocks country by country. This new trend in the global investment strategy was accelerated by increasing importance and high volatility of technology stocks in emerging markets recently. The increasing reliance on sector-based research has recently been accredited as a big factor in explaining why Asian stock markets are beginning to outperform again in recent years since the second half of 2001.2 The purpose of this paper is to examine stock price relations between the United States and Korea at different levels of aggregation, with emphasis on the high-tech sector. We focus on the correlation of daily price movements from July 1996 through February 2001 in the national stock price indices, the composite stock price indices with high-tech and small stocks, and the stock prices of leading semiconductor manufacturers in the US and Korea. The central issues that will be investigated are as follows. First, what are the interrelationships between stock prices in the US and Korea? Second, are covariations between stock prices in both countries different at different levels of aggregation? Third, what would be the impact of shocks and price innovation in one market on another in high frequency context? Finally, what would be the underlying forces for the increasing influence of US stock prices, especially in the high-tech sectors, on Korean stock prices? Section 2 describes the data and preliminary statistical analysis. Section 3 sets up the VAR model at different aggregation levels and reports the major empirical findings from the model. Section 4 reports the impact of the 1997 financial crisis on the interrelation-ships between the US and Korean stock markets at different aggregation levels. The summary and concluding remarks are provided in Section 5.

In this paper, we investigated the interrelationships between stock prices in the United States and Korea by applying the VAR (VECM) approach to the daily stock prices in both countries at three different levels of aggregation for the period from July 1996 to February 2001. The major findings of this study are summarized as follows. First, the US stock market plays a leading role over the Korean stock market at every level of aggregation. The reverse direction of influence, from Korea to the US, was not found in this study. Second, the evidence also suggested that the speed of transmission of innovation from the US to Korea was swift and finished for the most part within a 24-h period, although it took as long as three or four days to complete the whole innovation transmission process. Third, the influence of the US stock prices on Korean stock prices seems to be stronger and more significant in the composite national stock price indices and the tech-laden indices, such as NASDAQ, than in high-tech firms. Fourth, stock prices in Korea, national stock price indices and individual high-tech stocks alike, have become much more responsive to innovations in the US stock prices during the post-1997 financial crisis period than the pre-crisis period. These significant impacts of the US stock prices to the Korean stock prices in the high-tech sector and national stock price indices can be ascribed to several factors: globalization and the establishment of Korean high-tech firms in the global market-place, further opening-up and internationalization of the Korean stock market, deregulation on the foreign investors’ participation in the Korean stock market, and the increasing role of foreign investors in the recent Korean stock market. According to the Korea Stock Exchange (KSE), foreign investors, who purchased Korean shares worth more than 22.8 trillion won a year on average since 1998, reached 68.9 trillion won worth of Korean share holding as of April 2001. Foreign investors were reported to have increased their holdings from 11.9 percent in 1995 to 36.6 percent, as of December 2001, of the total net worth of listed companies in the Korea Stock Exchange.9 Nearly 37 percent of foreign participation in the Korean stock market is a considerably larger share compared to 18.8 percent in Japan and 10.1 percent in the United States (Finance Supervisory Agency, Korea, March 2002). Foreign investors in Korea have increased their share holdings in high-tech companies, centering on semiconductor shares. Foreign investors were also observed to move in tune with the movement of high-tech shares in the United States. The extension of this study may proceed in various directions. The different impacts of the 1997 Asian financial and economic crises on the interrelationship between the US and Korean stock markets in the different industries and at the firm level seem to be worthwhile examining. To a large extent, it is often a few individual stocks that have been contributing to a strong rally in recent Asian stock markets. Responding to this new trend, financial analysts in the US are increasingly looking at Asian companies through a sector lens and rely on sector-based research, rather than assessing stocks country by country. It seems to be very useful to look into the role of the Philadelphia Semiconductor Index and futures trading on the NASDAQ on top of the NASDAQ index in determining stock prices of high-tech industry and semiconductor manufacturers in Korea. Further investigation of the long-run impact of the 1997 Asian crisis on the international stock market integration among Asia-Pacific countries needs to be done. We leave the investigation of the long-run relationships between stock prices in the United States and Korea using the extended data set for different industries with low-frequency observations as part of the future research agenda.