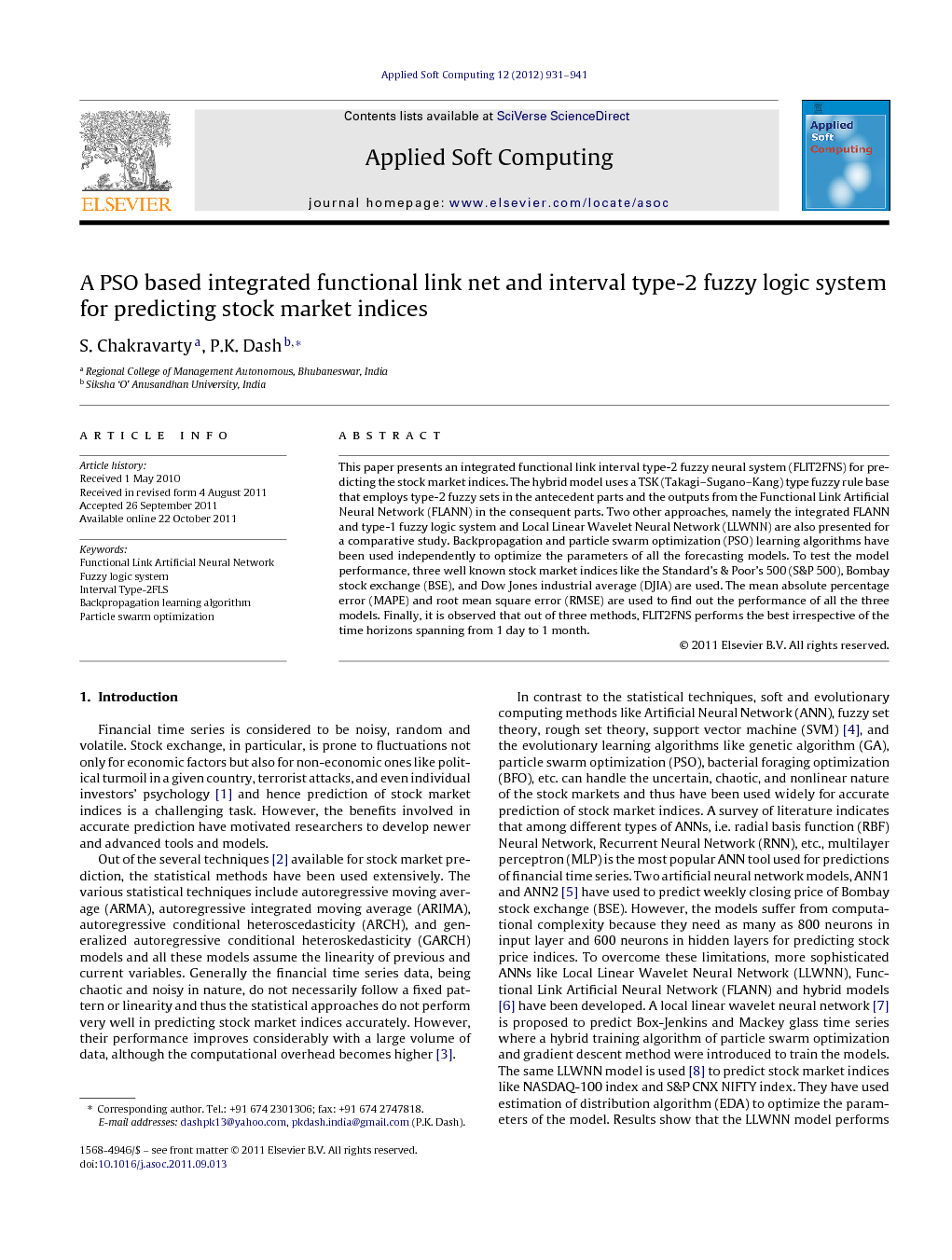 This paper presents an integrated functional link interval type-2 fuzzy neural system (FLIT2FNS) for predicting the stock market indices. The hybrid model uses a TSK (Takagi–Sugano–Kang) type fuzzy rule base that employs type-2 fuzzy sets in the antecedent parts and the outputs from the Functional Link Artificial Neural Network (FLANN) in the consequent parts. Two other approaches, namely the integrated FLANN and type-1 fuzzy logic system and Local Linear Wavelet Neural Network (LLWNN) are also presented for a comparative study. Backpropagation and particle swarm optimization (PSO) learning algorithms have been used independently to optimize the parameters of all the forecasting models. To test the model performance, three well known stock market indices like the Standard's & Poor's 500 (S&P 500), Bombay stock exchange (BSE), and Dow Jones industrial average (DJIA) are used. The mean absolute percentage error (MAPE) and root mean square error (RMSE) are used to find out the performance of all the three models. Finally, it is observed that out of three methods, FLIT2FNS performs the best irrespective of the time horizons spanning from 1 day to 1 month.

An integrated model comprising Functional Link Artificial Neural Network and interval Type-2fuzzy logic system has been used to predict three stock market indices, S&P 500, BSE, and DJIA for 1 day, 1 week, and 1 month in advance. For comparison the paper also presents the performance of the integrated FLANN and Type-1FLS, and Local Linear Wavelet Network (LLWNN) models. From the numerical experimentation results, it is clearly established that the interval Type-2FLS helps to deal with the uncertainties present in the stock market in an efficient manner. Backpropagation learning algorithm is used to train all the models. However, to improve the accuracy in prediction and reduce MAPE, Particle swarm optimization technique (PSO) is used to train the neural models separately. The simulation results clearly show that FLIT2FNS model performs better than that of FLANN and Type-1FLS followed by LLWNN model irrespective of the learning algorithms used or irrespective of the periodicity of the prediction. The average MAPE obtained from FLIT2FNS-PSO model is 0.32% for 1 day ahead prediction for all three datasets whereas, it is 1.1% and 1.4% for FLANN and Type-1FLS-PSO, and LLWNN-PSO models, respectively.