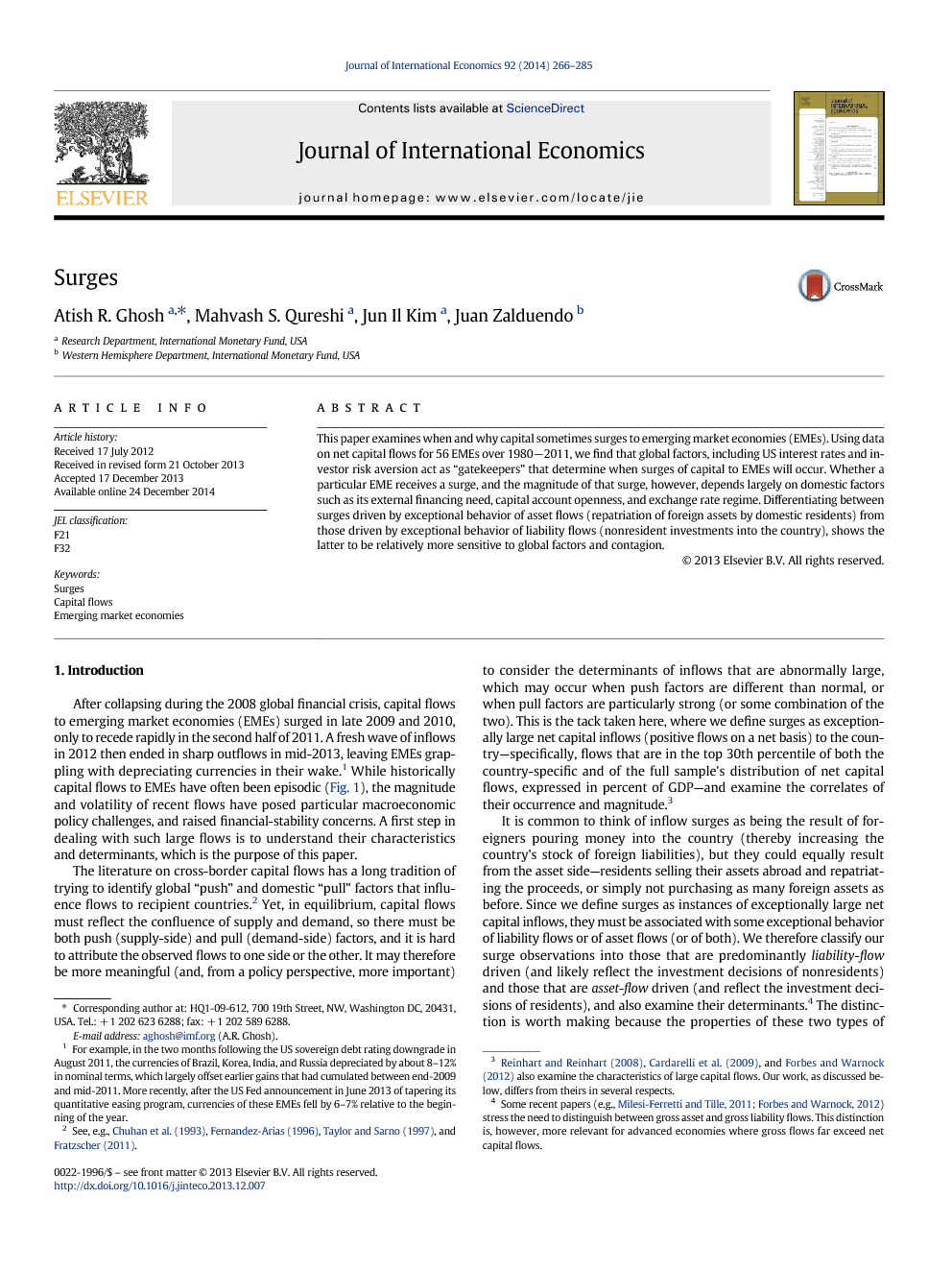 This paper examines when and why capital sometimes surges to emerging market economies (EMEs). Using data on net capital flows for 56 EMEs over 1980−2011, we find that global factors, including US interest rates and investor risk aversion act as “gatekeepers” that determine when surges of capital to EMEs will occur. Whether a particular EME receives a surge, and the magnitude of that surge, however, depends largely on domestic factors such as its external financing need, capital account openness, and exchange rate regime. Differentiating between surges driven by exceptional behavior of asset flows (repatriation of foreign assets by domestic residents) from those driven by exceptional behavior of liability flows (nonresident investments into the country), shows the latter to be relatively more sensitive to global factors and contagion.

This paper examines the drivers of exceptionally large net capital flows—surges—to EMEs, distinguishing between their occurrence and magnitude, and differentiating between those that reflect exceptional behavior of asset flows from those that reflect exceptional behavior of liability flows. We use a simple algorithm—based on a threshold approach—to identify surges, which correspond to most “well-known” episodes of large capital flows to EMEs: prior to the 1980s debt crisis, the post-debt crisis recovery and run-up to the Asian crisis, and the post-Asian crisis recovery and run-up to the global financial crisis. Our descriptive analysis based on a sample of 56 EMEs over 1980–2011 indicates that surges are synchronized internationally, and have become more frequent in recent years. Nevertheless, even when surges occur globally, they are relatively concentrated: no more than one-half of the EMEs in the sample experience a surge at the same time, with some countries experiencing them repeatedly. The amount of capital received in a surge also varies considerably across countries. Further, classifying surges based on whether they are driven by asset flows or liability flows, we find that most (over two-thirds) of the net flow surges to EMEs are driven by the latter. The picture that emerges from our regression analysis is one in which global push factors, notably, the US real interest rate and global market uncertainty, determine whether there will be a surge of capital flows towards EMEs generally—which explains why surges are synchronized internationally and why they recur. Even during such episodes, however, a country that has no need for capital or that is an unattractive destination for investors is unlikely to experience an inflow surge. Hence pull factors, including external financing needs, growth performance, the exchange rate regime, financial openness, and institutional quality help determine which countries experience an inflow surge. Conditional on a surge occurring, moreover, it is mainly the domestic pull factors that determine its magnitude. Our results also indicate that domestic and foreign investors respond to both global and local factors such that lower US interest rates encourage capital to flow to EMEs, while increased global market uncertainty drives capital towards traditional safe havens. Foreign investors, however, appear to be more sensitive to global conditions than their domestic counterparts, with a change in the US interest rate and global uncertainty raising the predicted likelihood of liability-flow surges by more than the likelihood of asset-flow surges. A binary recursive tree analysis echoes these results with global factors being most important in explaining liability-flow surges but domestic pull factors dominating in asset-flow surges. Overall, our findings provide a better understanding of large upward swings in capital flows to EMEs. From the policy perspective, they suggest that inasmuch as surges reflect exogenous supply-side factors that could reverse abruptly, the case for EMEs to take preventive measures, including macroprudential measures or capital controls, is correspondingly stronger. To the extent that advanced economy monetary policies are key drivers of inflow surges to EMEs, there may be a need for multilateral surveillance over such policies to ensure that spillovers are taken into account (Ostry et al., 2012). Further, since local factors (including capital account openness) also play a role in determining where the capital ends up, there may be a need for greater coordination between EMEs to ensure that they do not inadvertently pursue beggar-thy-neighbor policies. While the drivers of asset- and liability-flow surges tend to be largely similar, policy responses may need to be tailored to the type of surge—for example, prudential measures might be more important for dealing with financial-stability risks caused by asset-flow surges, but capital controls on inflows may be a viable option for liability-flow surges.