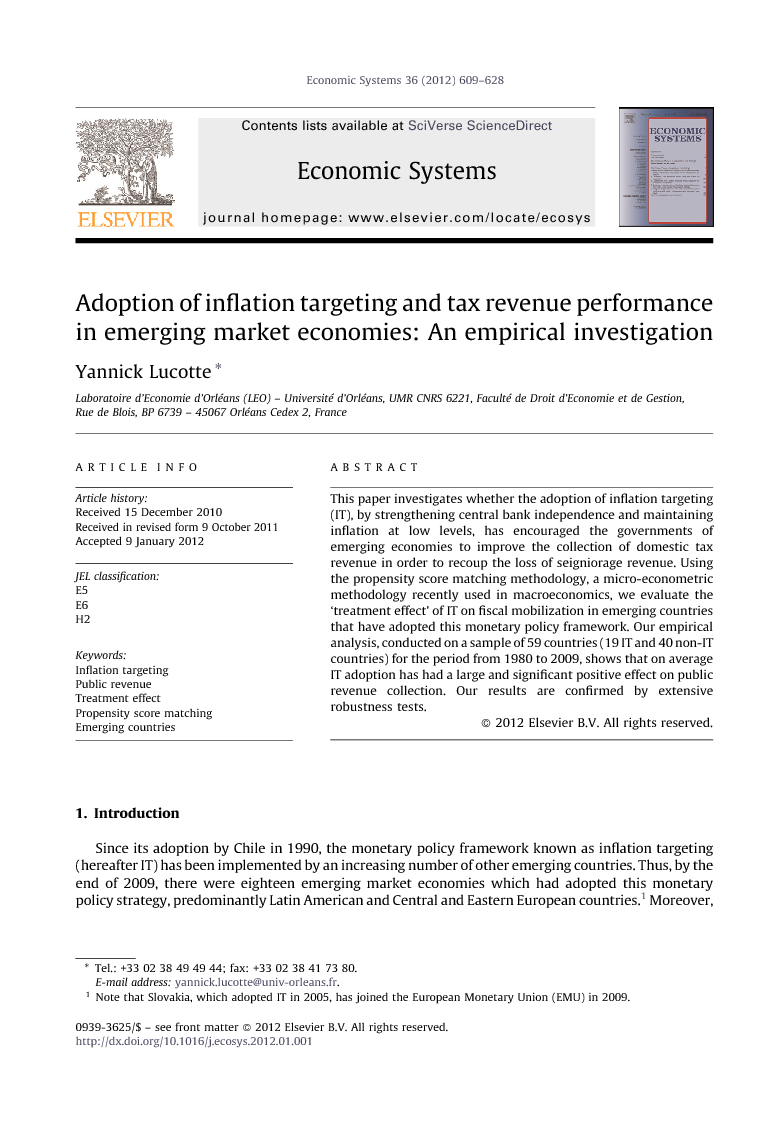 This paper investigates whether the adoption of inflation targeting (IT), by strengthening central bank independence and maintaining inflation at low levels, has encouraged the governments of emerging economies to improve the collection of domestic tax revenue in order to recoup the loss of seigniorage revenue. Using the propensity score matching methodology, a micro-econometric methodology recently used in macroeconomics, we evaluate the ‘treatment effect’ of IT on fiscal mobilization in emerging countries that have adopted this monetary policy framework. Our empirical analysis, conducted on a sample of 59 countries (19 IT and 40 non-IT countries) for the period from 1980 to 2009, shows that on average IT adoption has had a large and significant positive effect on public revenue collection. Our results are confirmed by extensive robustness tests.

Since its adoption by Chile in 1990, the monetary policy framework known as inflation targeting (hereafter IT) has been implemented by an increasing number of other emerging countries. Thus, by the end of 2009, there were eighteen emerging market economies which had adopted this monetary policy strategy, predominantly Latin American and Central and Eastern European countries.1 Moreover, beside these countries, several other emerging countries have expressed the wish to switch to IT at short-medium term.2 According to Amato and Gerlach (2002), this evolution of monetary policy constitutes the most important change in the framework of monetary policy since the collapse of the Bretton Woods system. Two main arguments can be advanced to explain the high popularity of IT in emerging economies. First, the choice of IT constitutes a pragmatic response to difficulties of central banks in conducting their monetary policy using exchange rate pegs or monetary aggregates as intermediate targets. Second, this choice can be explained by the relative benefits of this monetary policy framework for economic performances observed in industrialized and emerging economies that have adopted IT, and corroborated by a significant body of empirical literature. For instance, Lin and Ye (2009) and De Mendonça and De Guimarães e Souza (2012) find evidence for a large sample of developing and emerging countries that IT improves economic performance as measured by the level and variability of inflation.3 IT is defined as a framework for monetary policy characterized by the public announcement of official quantitative targets and by a commitment that low and stable inflation is the primary long-run goal of monetary policy (Bernanke et al., 1999). More precisely, Mishkin (2000) lists five components to an IT framework: (i) a public announcement of a medium-term numerical inflation target; (ii) an institutional commitment to price stability as the primary monetary policy objective; (iii) an information-inclusive strategy to set monetary policy instruments; (iv) an increased level of transparency for the conduct of monetary policy; and (v) an increased accountability of the central bank for attaining its inflation objectives. Thus, this monetary policy strategy requires much more than a public announcement of numerical inflation targets. The main advantage of an IT framework is the increase of monetary policy discipline, transparency and coherence (Bernanke et al., 1999 and Faust and Henderson, 2004). Furthermore, according to Bernanke et al. (1999), IT offers a framework of ‘constrained discretion’ where the official target imposes the constraint, and the discretion is the scope for monetary authorities to take into account short-term disturbances to output or financial stability. This flexibility in the conduct of monetary policy is particularly important for emerging economies that are often adversely affected by external shocks (Fraga et al., 2003). These considerations therefore suggest that the success and sustainability of IT over the medium term entail the fulfillment of several economic and institutional conditions. The literature has identified some preconditions that countries should theoretically satisfy before adopting IT.4 However, the experience of emerging countries shows that non-fulfillment is not in itself an impediment to the adoption and success of this monetary policy framework. This emphasizes especially that the implementation of IT is a gradual process with economic and institutional reforms before and after the official adoption of this monetary policy framework. Indeed, as illustrated in Batini and Laxton (2006), we observed in some emerging countries that the adoption of IT has been associated with rapid improvements in institutional and technical structures. Besides these post-IT technical and institutional changes, we think that the adoption of IT by emerging market economies could also affect the design of fiscal policy, and more particularly the design of tax policy. Indeed, by strengthening central bank independence and by giving the monetary authority a clear mandate for low inflation, the IT regime deprives the government of seigniorage revenue, which is an important source of public revenue in developing and emerging countries. Consequently, we can expect that the government will attempt to enhance its tax revenue collection in order to recoup the loss of inflation tax revenue. In a recent theoretical paper, Minea and Villieu (2009) address this question and show that a tighter monetary policy, characterized by a low inflation target, encourages the government to enhance the performance of its tax administration. Therefore, the aim of this paper is to empirically test this theoretical prediction by investigating whether the adoption of IT has encouraged the governments of emerging countries to raise the domestic tax revenue. To the best of our knowledge, no previous empirical study has tried to investigate this question. The remainder of the paper is organized as follows. Section 2 briefly discusses the literature and outlines the channels through which IT could affect tax policy in emerging economies. The econometric model and the data are described in Section 3. Section 4 discusses our econometric results and reports the robustness checks. Section 5 concludes, highlighting the main policy implications of our empirical findings.

Previous empirical studies focused on the impact of IT adoption on macroeconomic performances. In this paper we attempt to assess whether the adoption of this monetary policy framework, by maintaining inflation at low levels, encourages the government to improve the collection of domestic tax revenue in order to recoup the loss of seigniorage revenue due to a tighter monetary policy. Using a propensity score matching approach, we find that most of the estimated ATTs on the level of total public revenue are positive, highly significant, and large in magnitude. Moreover, results are robust to different alternative specifications. Indeed, our empirical results show that, on average, the adoption of IT has led to an augmentation of public revenue collection in emerging market economies. These empirical findings therefore suggest that the absence of fiscal dominance, i.e. a sound fiscal policy, is not a fundamental precondition for the adoption of IT, relative to other prerequisites such as central bank independence or the flexibility of the exchange regime. In other words, an unsound fiscal policy should not constitute an impediment to the adoption of IT by emerging economies, since this monetary policy framework may help constrain fiscal policy. The success and sustainability of IT over the medium term will depend more on the ability of the authorities to plan and drive institutional reforms after adopting IT, in particular reforms aiming to modernize tax and customs administrations.