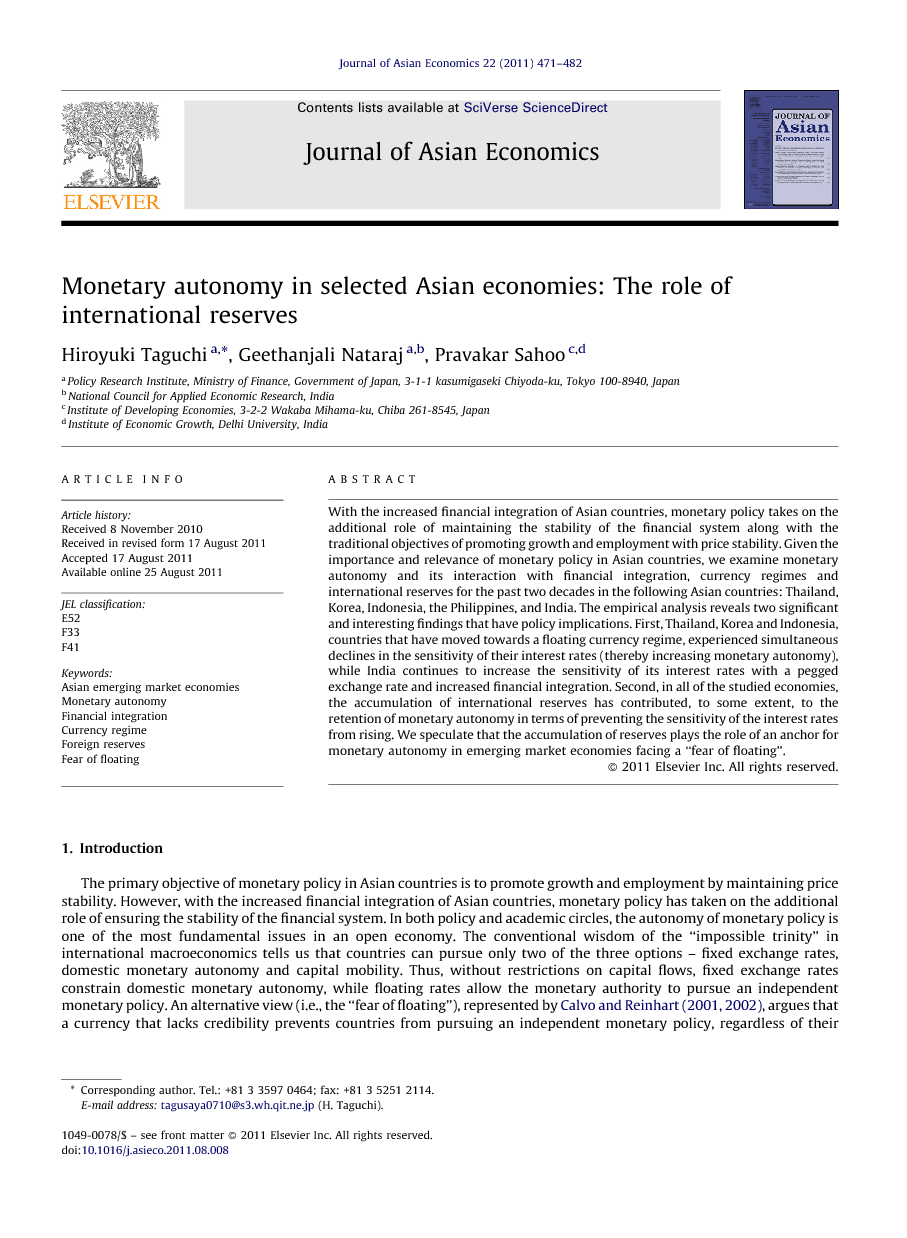 With the increased financial integration of Asian countries, monetary policy takes on the additional role of maintaining the stability of the financial system along with the traditional objectives of promoting growth and employment with price stability. Given the importance and relevance of monetary policy in Asian countries, we examine monetary autonomy and its interaction with financial integration, currency regimes and international reserves for the past two decades in the following Asian countries: Thailand, Korea, Indonesia, the Philippines, and India. The empirical analysis reveals two significant and interesting findings that have policy implications. First, Thailand, Korea and Indonesia, countries that have moved towards a floating currency regime, experienced simultaneous declines in the sensitivity of their interest rates (thereby increasing monetary autonomy), while India continues to increase the sensitivity of its interest rates with a pegged exchange rate and increased financial integration. Second, in all of the studied economies, the accumulation of international reserves has contributed, to some extent, to the retention of monetary autonomy in terms of preventing the sensitivity of the interest rates from rising. We speculate that the accumulation of reserves plays the role of an anchor for monetary autonomy in emerging market economies facing a “fear of floating”.

The primary objective of monetary policy in Asian countries is to promote growth and employment by maintaining price stability. However, with the increased financial integration of Asian countries, monetary policy has taken on the additional role of ensuring the stability of the financial system. In both policy and academic circles, the autonomy of monetary policy is one of the most fundamental issues in an open economy. The conventional wisdom of the “impossible trinity” in international macroeconomics tells us that countries can pursue only two of the three options – fixed exchange rates, domestic monetary autonomy and capital mobility. Thus, without restrictions on capital flows, fixed exchange rates constrain domestic monetary autonomy, while floating rates allow the monetary authority to pursue an independent monetary policy. An alternative view (i.e., the “fear of floating”), represented by Calvo and Reinhart, 2001 and Calvo and Reinhart, 2002, argues that a currency that lacks credibility prevents countries from pursuing an independent monetary policy, regardless of their announced regime. This “fear of floating” tends to be greater for open or small EMEs1 for which currency credibility is hard to achieve. So far, no clear consensus has been reached. The recent surge in capital inflows in EMEs during the recovery process from the 2008 global financial crisis has refocused attention on the feasibility of monetary autonomy in these economies. Large capital inflows have complicated the management of monetary policy because of their potential to generate exchange rate appreciation, inflation pressures, or asset price boom-and-bust cycles. For example, suppose that an EME raises its interest rate as a strategy to cope with inflation pressures. This behavior attracts capital inflows, reflecting the interest rate differentials with advanced economies. However, capital inflows were what had led to the exchange rate appreciation in the first place. Therefore the authority may intervene in the exchange rate market to avoid currency appreciation that will damage the competitiveness of the trade sector. This intervention itself may result in an increase in the money supply, thereby re-creating inflation pressures. The authority can, alternatively, sterilize the intervention to avoid inflation pressures. This sterilization, in turn, keeps the domestic interest rate at a relatively high level, thereby perpetuating capital inflows. This monetary loop is a reflection of nothing but a policy constraint in terms of endangered monetary autonomy, regardless of any hypothesis, i.e., the “impossible trinity” or “fear of floating”. Given the economic trends of the past two decades, Asian emerging economies have faced drastic changes in the component variables of the “impossible trinity”. They have experienced financial integration in line with the progress of globalization. At the same time, some of their economies suffered from the 1997 to the 1998 currency crises, resulting in a shift in currency regimes from US-dollar-pegged exchange rate regimes to more flexible ones. In addition, they accumulated foreign reserves in the wake of currency crises, especially in East Asia. Considering these changes in the components of the “impossible trinity” and foreign reserves, this paper will examine the trends in monetary autonomy and its interaction with financial integration, currency regimes and foreign reserves, focusing on select Asian economies. This paper will also critically review the results of Aizenman, Chinn, and Ito (2008), which is a previous study that has the same scope as this one but employs different approaches. The rest of the paper is structured as follows. Section 2 reviews previous studies and clarifies this paper's contribution. Section 3 presents empirical analyses introducing the methodology and data and a discussion of the results of the estimation and their interpretation. Section 4 summarizes the results and concludes.

This paper examines the trends in monetary autonomy and their interaction with financial integration, currency regimes and foreign reserves over the past two decades in the following Asian countries: Thailand, Korea, Indonesia, the Philippines, and India. We critically reviewed Aizenman et al. (2008) by using alternative indexes that account for the measurement problem and by re-estimating the relationship between the four variables. Our main findings, which showed some contrast with Aizenman et al. (2008), are as follows: first, Thailand, Korea and Indonesia, which shifted to floating currency regimes, decreased the sensitivities of their interest rates (have raised monetary autonomy) after the regime change, while India, without any change in currency regime, has continued to increase the sensitivities of its interest rates (has lowered monetary autonomy) in line with the rapid increase in financial integration. Second, in all of the sample economies, the accumulation of foreign reserves has contributed to retaining monetary autonomy to some degree by preventing the sensitivities of the interest rates from increasing. We speculate that this accumulation may take the role of an anchor for monetary autonomy in emerging market economies facing a “fear of floating”.