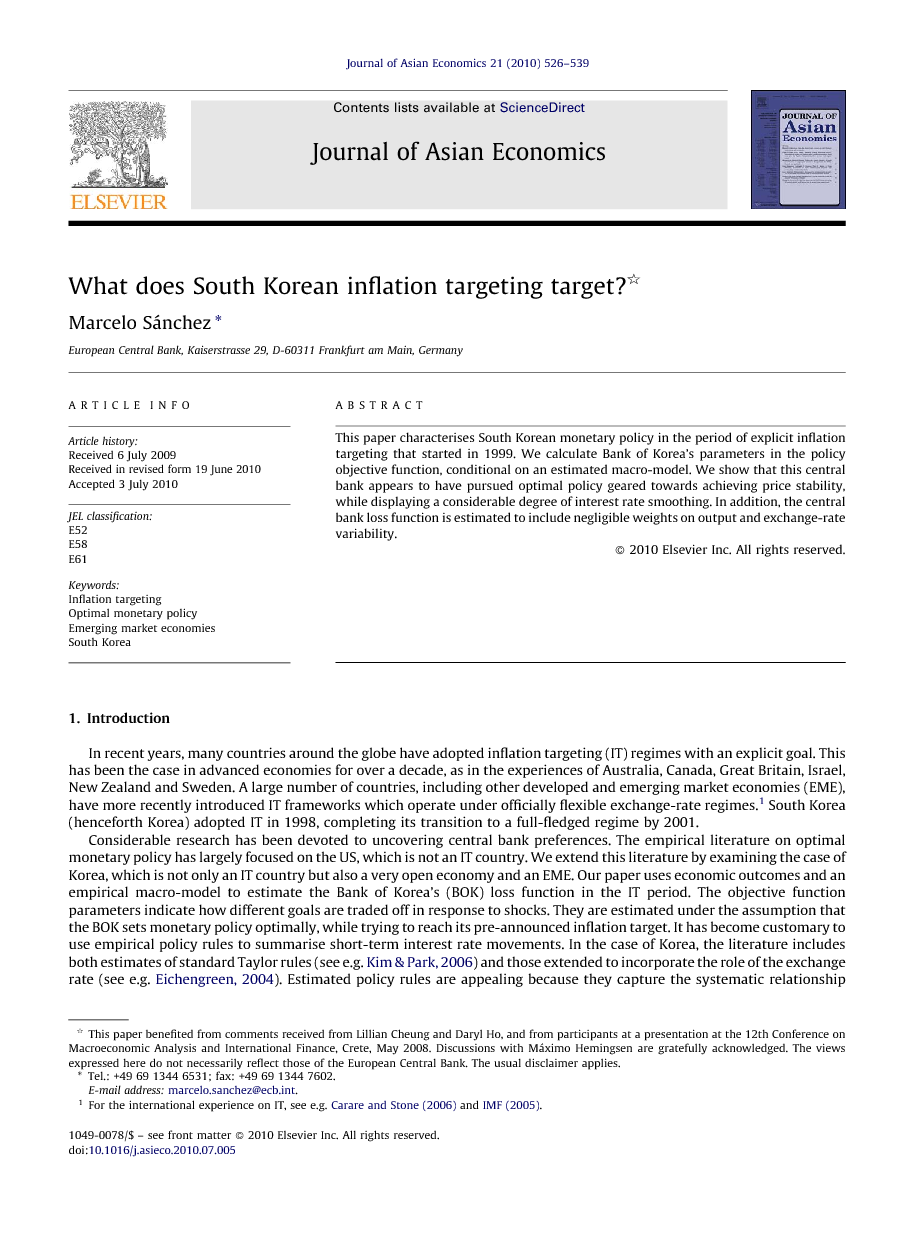 This paper characterises South Korean monetary policy in the period of explicit inflation targeting that started in 1999. We calculate Bank of Korea's parameters in the policy objective function, conditional on an estimated macro-model. We show that this central bank appears to have pursued optimal policy geared towards achieving price stability, while displaying a considerable degree of interest rate smoothing. In addition, the central bank loss function is estimated to include negligible weights on output and exchange-rate variability.

Korea's experience since IT implementation in 1999 has been broadly satisfactory, with inflation in particular being relatively low and stable. In this sense, the BOK's primary goal of price stability appears to have been achieved. According to our characterisation of Korea's IT regime, the monetary authority cares about price stability, while also exhibiting a high degree of interest rate smoothing. Moreover, the BOK is estimated to put a negligible weight on output variability. In line with the existing literature, we have provided two different explanations for interest rate smoothing. According to one of them, smoothing is seen as independent from central bank concerns for output variability. This view is embedded in standard contributions that focus on characterising smoothing rather than establishing possible links with an output stabilisation goal. From this perspective, our results are to be interpreted as capturing a gradualist approach to inflation targeting, coupled with a neglect for output stability. Our estimate of a much bigger weight on inflation than output would thus be compatible with Korea's IT framework, which has price stability as the main goal of monetary policy. Our results could also be rationalised in a second way, along the lines of Collins and Siklos (2004). Drawing on Svensson (1999), these authors interpret the result that central banks evince strong interest rate smoothing as indirectly reflecting some concern for output stability. In this view, the BOK would adopt a flexible policy in which monetary policy inertia aims at dampening output volatility. Therefore, our finding of a negligible weight on output could still be consistent with the existence of a (secondary) output stabilisation goal. Despite the contrast between the two explanations given here, the second one could also be reconciled with Korea's monetary policy setup. As we have seen, price stability is Korea's monetary policy main goal, but the BOK is also supposed to care for economic and financial stability. In conclusion, the two interpretations given here for the link between interest rate smoothing and output stabilisation are broadly in line with Korean monetary scheme. It is however worth noting that these two views convey somewhat different implications for the role that output stability plays in BOK policy moves. Our results also allow for a better understanding of the role of exchange-rate variability in monetary policymaking, in connection with Korea's status as both a very open economy and an EME country. We find that the Korean monetary authority does not put any noticeable emphasis on the exchange rate. This is consistent with the notion that the BOK would benefit from monitoring the exchange rate for IT considerations. In connection with this, estimated reaction functions may involve an exchange-rate term even if the policymaker does not have a specific concern for exchange-rate fluctuations. In particular, our finding does not contradict Eichengreen's (2004) result that the value of the won enters his estimated monetary policy reaction function for Korea. This author argues that the communication of the country's monetary policymaking could be more transparent about the role played by the exchange rate.28 Judging from our findings, this variable is a leading indicator of inflation that is worth monitoring. Communication of such role in relation to targeted objectives could only contribute to enhancing monetary policy credibility. The finding that the BOK does not put emphasis on the exchange rate is also in line with the won's higher flexibility observed during the IT period, which has occurred despite considerable intervention in the foreign exchange market.