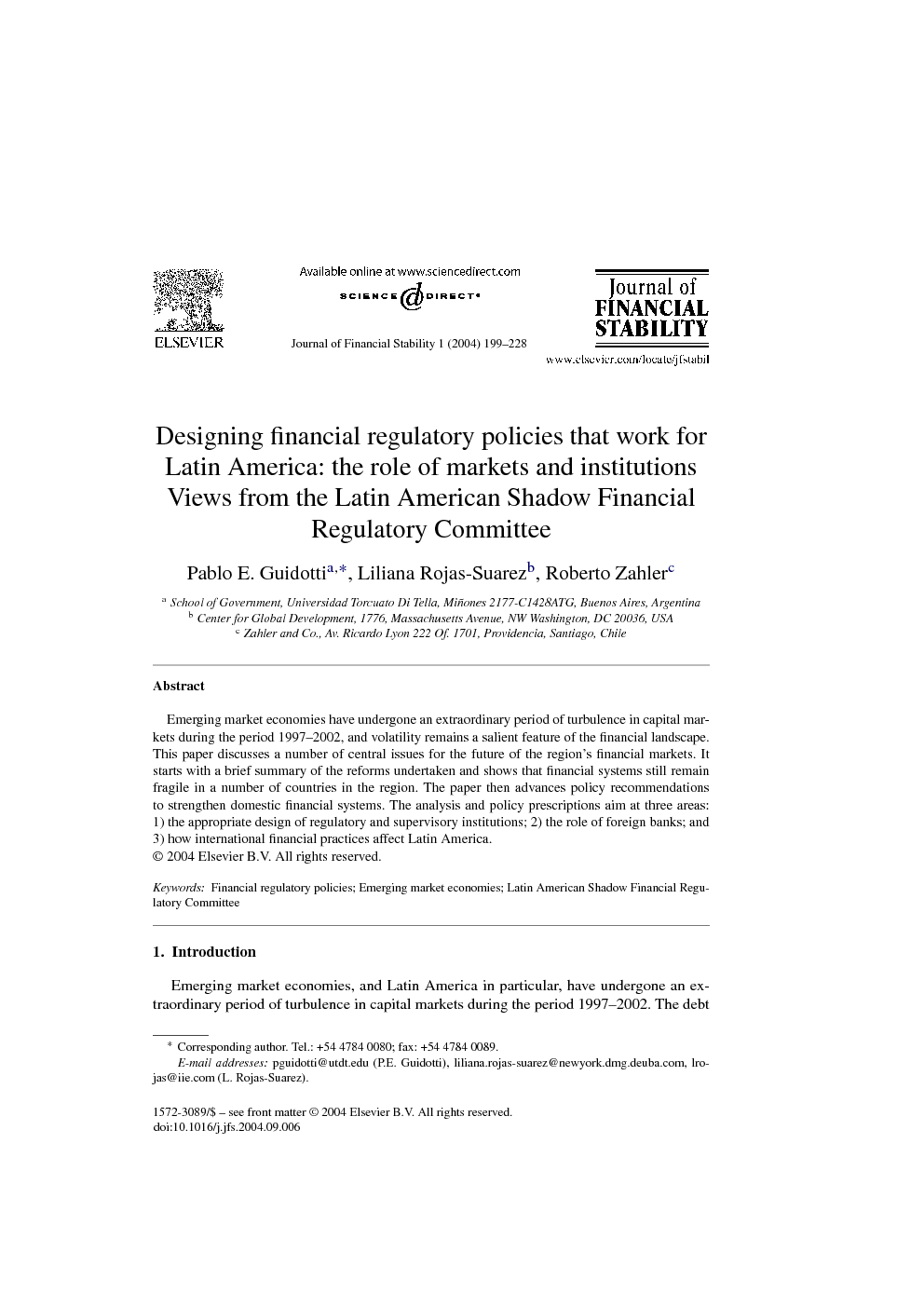 Emerging market economies have undergone an extraordinary period of turbulence in capital markets during the period 1997–2002, and volatility remains a salient feature of the financial landscape. This paper discusses a number of central issues for the future of the region's financial markets. It starts with a brief summary of the reforms undertaken and shows that financial systems still remain fragile in a number of countries in the region. The paper then advances policy recommendations to strengthen domestic financial systems. The analysis and policy prescriptions aim at three areas: 1) the appropriate design of regulatory and supervisory institutions; 2) the role of foreign banks; and 3) how international financial practices affect Latin America.

Emerging market economies, and Latin America in particular, have undergone an extraordinary period of turbulence in capital markets during the period 1997–2002. The debt default crisis in Argentina and market concerns about economic and financial stability in Brazil preceding its 2002 presidential election provide a reminder that volatility remains a salient feature of the financial landscape. In the view of the Latin American Shadow Financial Regulatory Committee (LASFRC) it is unlikely that the region will see a restoration of capital flows to the exceptional levels preceding the Asian crisis in the foreseeable future, due to a number of factors. These include: relatively high external private and public debt levels in a number of Latin American countries, slow growth in industrial countries, generally tighter risk-control procedures applied by international financial institutions, the unresolved discussion on the role of private sector involvement (PSI) in crisis prevention and resolution, along with increasing awareness of the relative underdevelopment (or weakness) of political, legal, and economic institutions in many countries of the region. At the same time, we recognize that industrial countries’ official assistance bilaterally or through multilateral institutions could become less forthcoming in the years ahead. Finally, the recent scandals in accounting practices of US corporations have led investors to reconsider the characteristics of their overall portfolios, potentially increasing the volatility of capital flows towards the region. Without a sustained improvement in external financing flows, countries in Latin America are facing strong difficulties in restoring economic growth and generating employment. This has led a number of analysts and policymakers in the region and elsewhere to question the appropriateness of the reforms undertaken in these countries during the 1990s, including those in their domestic financial systems. The very significant changes that are taking place in the political scenario in Latin America, which to a certain extent respond to “adjustment and/or globalization fatigue”, together with proposals for “reform reversals” are signs of this dissatisfaction. Since its creation in 2000, the LASFRC has closely followed and analyzed events and developments in Latin America and elsewhere that affect the soundness of the region's financial systems. In its statements, the Committee has concluded that the region's reform agenda is far from complete; accordingly, it has identified a number of areas where substantial additional efforts are needed1. Based on its analysis, the Committee believes that reforms in the financial system at the national and international level should be market-oriented, aimed at facilitating the effective working of markets while minimizing the adverse effects of distortions and interference2. At the same time, however, the Committee also recognizes that the design of appropriate financial reforms In Latin America requires taking into account the particular features of the region. This implies that in a number of cases adequate adaptation, rather than simple adoption of internationally recommended policies, is better suited to strengthen the safety and soundness of domestic financial systems. A central lesson of this recent period of capital market turbulence is that financial markets and institutions, domestic and international, play a crucial role in explaining economic fluctuations, growth and development. In this respect, we believe that financial policies remain a central piece in any strategy to reduce an economy's external vulnerability and to restore sustainable capital flows to the region. In this paper we review and further discuss a number of central issues for the future of financial markets in Latin America. These issues have been debated by the Committee, and have been the subject of its statements. Section 2 kicks off by briefly summarizing the reforms undertaken in Latin American financial markets and shows that financial systems still remain fragile in a number of countries in the region. Sections 3, 3.1, 3.2, 3.2.1, 3.2.2, 3.2.3, 4, 4.1, 4.1.1, 4.1.2, 4.2, 4.3, 4.3.1, 4.3.2, 4.3.3 and 5 advance the Committee's policy recommendations to strengthen domestic financial systems. The analysis and policy prescriptions are aimed at three areas. Section 3 deals with the appropriate design of regulatory and supervisory institutions and instruments. Section 4 discusses the role of foreign banks in strengthening private financial institutions, and Section 5 analyzes international financial practices and institutions affecting the behavior of Latin American financial markets. Section 6 concludes the paper.

This paper has presented some of the views and recommendations of the LASFRC to strengthen financial systems in Latin America. After analyzing the financial sector reforms of the 1990s, we concluded that a carefully redesign of the reform process in Latin American financial markets is necessary. We advanced three arguments. The first is that the shallowness, inadequacies and fragilities of Latin American financial markets respond, at least partially, to poorly designed reforms and regulations that, on a number of occasions, have limited the independence of the regulatory agencies as well as the complementary role of market discipline. Second, the rapid growth of foreign institutions in the region has contributed to strengthening domestic financial markets. Third, internationally-designed recommendations aimed at strengthening financial markets in industrial countries may not always achieve the intended desirable effects when applied to Latin American financial markets. For each of these three areas, the paper has advanced a number of specific policy recommendations. In spite of the long list of recommendations, we are aware that it is far from being complete. For example, recent Latin American experience shows that in order to strengthen and make its financial systems more efficient, thus reducing the probability of facing financial crises, appropriate macroeconomic policy design and implementation remains at the top of the agenda for most of the region. And while we have emphasized the role of market discipline, we have not discussed the essential role of fiscal discipline. Indeed, financial markets cannot work well in an environment where the government crowds-out the private sector. Establishing effective fiscal institutions capable of ensuring sustainable fiscal positions would significantly contribute to macroeconomic and financial stability in Latin America. To clarify this point, fiscal discipline however goes beyond simply achieving structural budgetary equilibrium. The fiscal system must be made less vulnerable to external shocks and contingent costs of problems in the financial-services industry should be explicitly recognized. Other essential reforms not discussed in this paper include: (i) The need of many Latin American countries to enact and enforce prompt corrective action-type rules as a structured system in order to enhance the effectiveness of supervisory reviews. Otherwise, bank weaknesses might be off the supervisor's radar screen until problems are too deep and costly. (ii) No regulatory discrimination in favor of state-owned banks. Many Latin American countries have applied lax rules to state-owned banks as a means to promote development, distorting competition in their domestic financial sector and hindering the efficiency of banks as intermediaries in the savings-investment process. State-owned banks must be subject to the same rules as private institutions. They should not be given unfair competitive advantages and must also be subject to the same strict disclosure requirements as private banks. (iii) Keeping connected lending at bay. Connected lending practices are still at the root of banking sector weaknesses in many Latin American countries and should be avoided. Higher capital charges and/or collateral requirements for connected loans along with disclosure of beneficial ownership and risks associated with loans to connected parties, would allow Latin American supervisors to put a check on one of the most important problems for Latin American banks. In many countries, the rules exist but are improperly enforced. (iv) Contract enforcement. Weak judicial enforcement, poor bankruptcy laws and unreliable property registries limit the incentive for borrowers to repay. This is an issue that deserves special attention by governments and regulators in Latin America in order to reinforce market discipline. Such a long agenda begs for prioritazion and adequate design. In its future meetings the LASFRC will discuss further how to help countries in the region to best continue and implement their reform process.